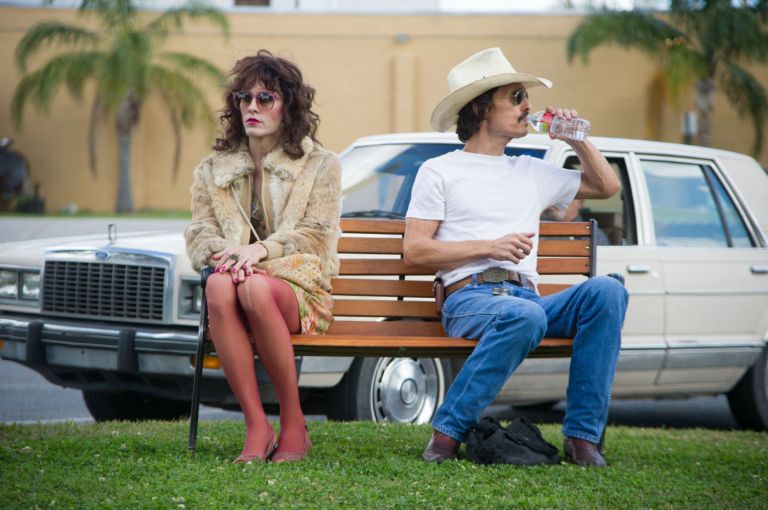 There is a joke in Hollywood that if you want to win an Oscar, you have to take on a role where the character either dies tragically, has a physical or mental illness, and/or you have to gain or lose a ridiculous amount of weight or wear a prosthetic device. Look at the list of these Oscar winners:

And that’s just the men.

Okay, I’ll agree that these are all great movies, and the awards and accolades they earned were well deserved but what if there is something to this?

Enter DALLAS BUYERS CLUB, a film that ticks more than one of the above boxes. Actors Matthew McConaughey and Jared Leto, who both play men with AIDS, reportedly lost 38 and 40 pounds respectively for their roles… but I’m getting ahead of myself.

It’s 1985 and Texas electrician Ron Woodroof is as wild as the bulls he rides in his spare time. He lives a devil-may-care existence, spending all of his disposable income on women, Jack Daniels and cocaine. After Ron collapses at home, he wakes up in the hospital to be greeted by two doctors who are wearing masks and rubber gloves. It’s very early days for HIV and AIDS (it was first clinically observed in the US only four years earlier), and back then it was believed that the virus could be transmitted through saliva.

Ron is told that he has AIDS but he refuses to believe it. After all, he thinks that only “queers” like Rock Hudson get the disease. Although the doctors tell him that his case is so advanced that he only has about 30 days left to live, he sets out trying to get the then experimental drug AZT for himself. He finds a hospital janitor who is willing to steal the hospital’s supply of the drug for a fee and, when that supply line dries up, Ron heads for the Mexican border where he hears the drug is readily available. There, he meets a disgraced American doctor who puts him on a cocktail of vitamins and fatty acids instead of the potentially poisonous AZT. The new treatment seems to work and Ron starts to feel better. He then has the idea to smuggle these medications into Texas and offer them to other AIDS sufferers. He hears about “buyers’ clubs” that have sprung up across the country where people pay a flat fee every month in exchange for all the meds they need. Along with Rayon, a transvestite Ron meets in the hospital, the Dallas Buyers Club is born.

I’ll be honest, I am not a fan of Matthew McConaughey – at least I wasn’t until I watched this film. I always thought his “screen looks to acting ability coefficient” was up in the Tom Cruise range but, with this film, he has made me reconsider him. In DALLAS BUYERS CLUB, McConaughey has delivered the performance of his career. Woodruff is crude, funny, opportunistic, smart and caring, and McConaughey handles each aspect of his character with an assurance that we’ve never seen from him before. The boy can act and if he does land the Best Actor Oscar®, it will be well deserved.

Go see this movie – not just for Matthew McConaughey’s performance but also for Jared Leto’s, who plays Rayon. I wouldn’t be surprised if he wins the Best Supporting Actor Oscar®.