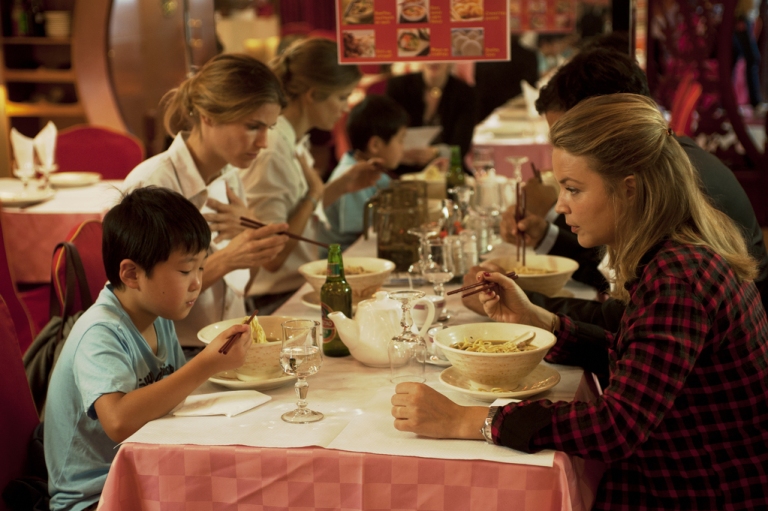 Making a remake of a foreign film can be a dangerous business. What might work in one culture may be lost in translation when moved to another. Sure, some remakes have been commercially successful and here are a few of them:

But many people (including me) would say that even these three remakes are inferior to their original counterparts. (Can you think of any other remakes of foreign films? Which do you think is better – the remake or the original? Let me know!)

Now, along comes the French film LITTLE COOKIE, or just COOKIE, which is its title in France. It is the remake of the 2007 Israeli hit film, NOODLE. Just as in the original, the story is about a widowed flight attendant whose life is turned upside down when she gets saddled with a young Chinese boy after his mother (the woman’s illegal domestic helper) is summarily deported back to China. In NOODLE, the Chinese woman is returned to Beijing whereas in LITTLE COOKIE, she is returned to Shenzhen. This north-south difference is reflected in both films’ titles. In the northern part of China, noodles are a popular food, while in the south, fortune cookies are popular. What??? Did I just write that? Fortune cookies are about as Chinese as deep-dish pizza is Italian! I guess the French don’t travel much.

These silly stereotypes seem to pervade LITTLE COOKIE. Because Adeline’s (the flight attendant) family doesn’t speak a word of Chinese, they don’t know the boy’s name and they give up trying to coax it out of him after 20 seconds. Instead they give him the cutesy nickname of “Cookie” because he eats one cookie. Why didn’t they just call him “Egg Roll” or “Fried Rice” since they think he’s from southern China? That just didn’t make sense. The boy was born in France, which is why they couldn’t legally send him back to his mother in China. (This little detail seems to be lost on the scriptwriters when Adeline and Cookie go to Shenzhen and the boy is able to haggle over a bus fare like a well-seasoned local.)

In another scene, Adeline’s sister phones up the Immigration Department to enquire about the boy’s mother. She speaks French using a Chinese immigrant’s accent and pronunciation so that the authorities won’t suspect that she’s a native speaker. What century was this written?

I have to admit that I have a special place in my heart for NOODLE, as I was the one who brought the film to Hong Kong. I also introduced Chen Bao Qi (the young Chinese actor who played “Noodle”) to Hong Kong audiences. What a delightful boy he was! In NOODLE, the comedy of the differences between the Israeli and Chinese cultures was sweet. We could laugh as the flight attendant, her sister and their friend struggle to find a way to communicate with the boy. In LITTLE COOKIE, it all seems like one big inconvenience for Adeline. Sure, her life has been on autopilot since the death of her family (another slight but important deviation from the original story) but we don’t get the sense that Cookie and Adeline have reached as deep into each other’s hearts as the characters in the Israeli version did.

My advice is to watch it and then get yourself a copy of NOODLE. It’s a much better film.

LITTLE COOKIE will be screened as part of Le French May’s series of films entitled “French Shadows, All Eyes on China”. You can catch it at the Palace IFC cinema tomorrow (Friday) night, May 9th, and again at the Broadway Cinematheque on Wednesday night, May 21st.

I couldn’t find a trailer with English subtitles. This one is in French but it will give you an idea about the film.