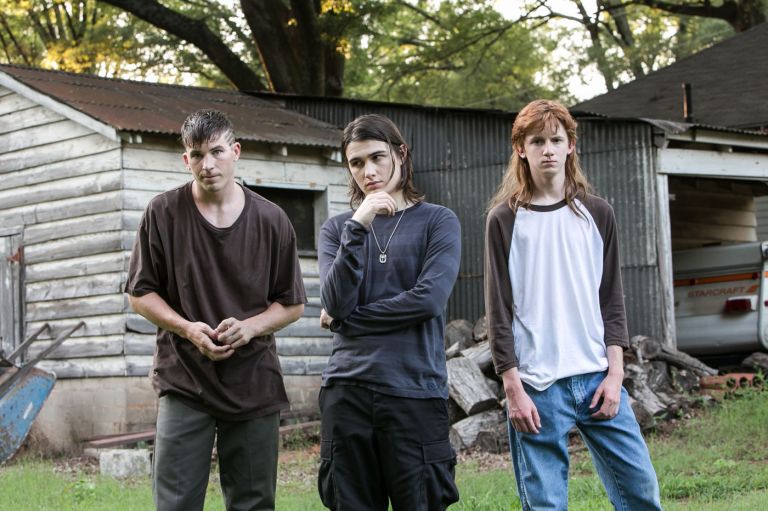 People who know me know that I like my movies to be meaty. Sure, I also like to laugh out loud as much as the next person, but my film preferences tend toward subjects that are serious in nature. So, faced with reviewing films about a gigantic lizard, a bunch of mutant superheroes or some neighbours from hell, my choice this week was simple: DEVIL’S KNOT.

In case you don’t know the true story of the West Memphis 3, three young boys were found hogtied and drowned in a creek in West Memphis, Arkansas in 1993. The police assumed it was a satanic cult murder and they very quickly arrested three young men for the crime. Despite the clear lack of forensic evidence to prove their guilt – and, in fact, there wasn’t any evidence at all – the men were tried, found guilty and sentenced to life imprisonment with one of them receiving a death sentence. Everyone in West Memphis, from the police to the jury, the judge and the townspeople, was convinced of their guilt. The only one who wasn’t convinced was private investigator, Ron Lax, who took it upon himself to gather evidence to prove these men innocent. Unfortunately, the cards were all stacked against him.

If this film seems like déjà vu to you, there is a good reason for that. Four (count ’em, four!) documentaries have already been made on this subject with the most recent, WEST OF MEMPHIS, coming out in 2012. And that’s the big problem with DEVIL’S KNOT. If you are going to make a dramatized version of a fairly well known event (it is, at least, in the US), either cover the whole story or bring something new to the audience. I wrote above that I like meaty films. This film is all hamburger but no toppings or bun… and it’s not even good quality hamburger. I’ve seen mediocre TV Movies of the Week that are better than this.

I made a point of watching DEVIL’S KNOT before I watched WEST OF MEMPHIS (and I still haven’t seen the LOST PARADISE trilogy) because I didn’t want my opinion of the film to be biased. As I watched DEVIL’S KNOT, I kept thinking to myself that parts of the story were missing because things just didn’t add up. What, for example, was the relationship between little Stevie Branch and his apparent step-father, Terry Hobbs? Where did the bloody knife come from? They didn’t find it in the creek. Then there is the 18-year epilogue, which is equally important to the story but is covered in just a few sentences on the screen as the film comes to an end. If DEVIL’S KNOT were made in 1995, then it could be excused for telling the story with such a narrow focus. But it’s almost 20 years later and we now know much more about what did and did not happen in that creek in Robin Hood Hills than we did back then. So why leave so much out?

It is not surprising that Canadian director Atom Egoyan was drawn to this film. His works often explore themes of isolation and alienation. The three young men who were found guilty of murdering the three boys were all outsiders in their own community. That’s what made them targets of the police and their neighbours. But the story of the Damien Echols, Jason Baldwin and Jessie Misskelley Jr. is more than just one about being outsiders. It’s really about the travesty of truth and justice that was allowed to take place in a West Memphis courtroom – in 1993, 2007 and finally in 2011. To learn that story you’ll need to watch WEST OF MEMPHIS.