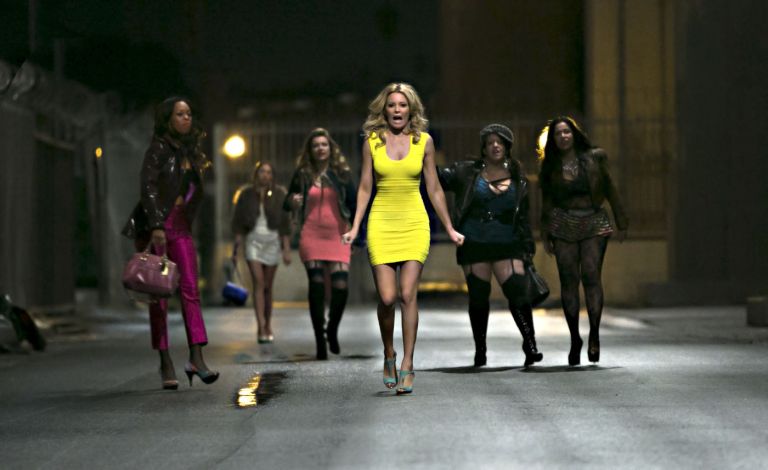 What’s the deal with women dreading the walk of shame? Ladies! This is a simple problem to solve. All you need to do is leave a spare outfit in your office or car. Get to the office about an hour earlier than usual, take your outfit into the toilet and do a sink wash. No one will be the wiser. Guys keep spare dress shirts and ties in their desk drawers all the time for just these occasions.

If only Meghan Miles (Elizabeth Banks) had taken my advice in WALK OF SHAME. Well, technically she did but it didn’t matter. Meghan is a TV newsreader in Los Angeles which, if you didn’t already know, is the second largest TV market in the US. (See point #5, below.) She is up for a huge career promotion but things don’t always go according to plan. In the course of a few hours, her boyfriend dumps her, leaving her with a near-empty apartment, and she is passed over for a promotion. To cheer her up, her two faithful BFFs convince her to join them on a wicked night on the town, to which she agrees, where she ends up meeting Gordon (James Marsden), a handsome bartender/aspiring writer (aren’t they all?) who takes her home with him at the end of his shift. In the middle of the night, she receives a message that the job is still in play, so she decides to get dressed, sneak out and head home.

And that’s where things go from bad to worse. While she remembers to take her keys with her, she leaves her phone back at Gordon’s. Her purse is in her car, which is parked outside, except now the car is being towed away for being illegally parked. So begins Meghan’s night of hell as she manoeuvres through downtown LA trying to either get home or get to her TV station.

Now maybe it’s just an LA thing but here is what I gleaned from the film:

1. If you’re a hot woman and you’re out in the middle of the night wearing an amazing, skin-tight yellow dress, you must be a prostitute.
2. The whole of downtown LA is patrolled by just two policemen who are both idiots.
3. No one will lend you their mobile phone for you to make a call.
4. The nicest people in LA are the drug dealers.
5. No one watches the 6:00 news or reads newspapers or billboards (except for the drug dealers).

WALK OF SHAME borrows heavily from two other films that dealt with being stranded overnight in the big, bad city. In the 1970 comedy, THE OUT OF TOWNERS, Jack Lemmon and Sandy Dennis starred as the Kellermans of Twin Oaks, Ohio, who come to New York for a job interview, and in the 1985 comedy, AFTER HOURS, Griffin Dunne starred as a word processor (remember when that was a job title?) who has a one-nighter with a woman in New York’s Soho district. So what’s the difference? These earlier films were both funny while WALK OF SHAME is just a misogynist train wreck. We shouldn’t be surprised, as WALK OF SHAME was written and directed by Adam Sandler’s pal, Steven Brill. He also wrote LITTLE NICKY so that should give you an indication of his “ability”. (LITTLE NICKY was nominated for five Razzie awards. Fortunately, it lost out to BATTLEFIELD EARTH that year.)

To be fair, Banks does an admirable job with her brand of screwball, physical humour but even she can’t carry the load alone. Marsden, who has shown in other films and on TV that he is more than just a pretty face, is reduced to being, well, the pretty face. Even nebbishy Willie Garson plays it straight in this film as Meghan’s producer. The only other bright spot is Alphonso McAuley, who plays Pookie, the dozy drug dealer. Pookie is the only one in Los Angeles who recognises Meghan.

Do yourself a favour and give this film a huge miss. If you do see it though, be prepared to do your own walk of shame as you come out from the cinema.