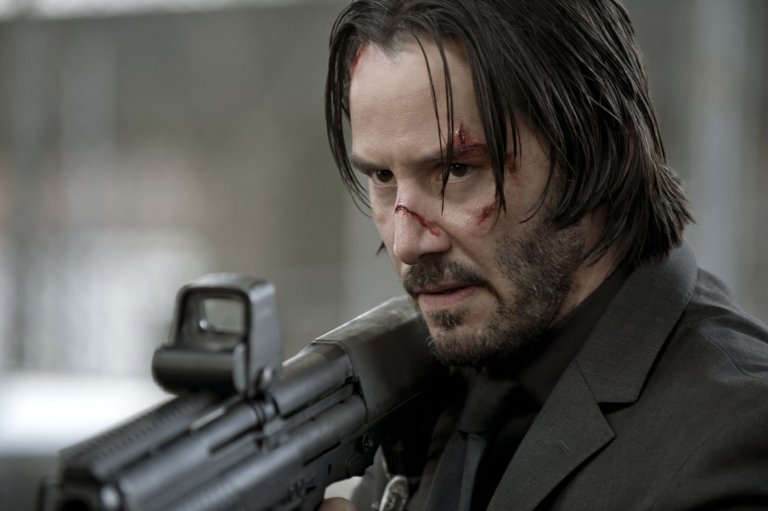 People who know me, have heard me on the radio or have read my blog know that I’m not fan of Shia LaBeouf. Well, I’m not a fan of Keanu Reeves either. He’s not the most expressive of actors – “wooden” seems like a good description of his acting style. Fortunately, he has found the right vehicle for his ability (or his lack of ability, depending on your perspective) in JOHN WICK. In this slow burning, action thriller, Reeves plays a retired assassin who comes back into service after some Russian American thugs steal his vintage ’69 Mustang car and kill his puppy in the process. Bad news for them though. Wick is apparently the guy “you send in to kill the boogeyman”. You definitely don’t want to get him angry but that’s exactly what the son of his former colleague did… and he has to pay for his transgression.

That’s pretty much the plot. For about 90 minutes, we watch Wick take out henchman after henchman as he shoots his way up the ladder to Russian expat mafioso, Viggo Turasov’s son, Iosef (Alfie Allen, TV’s GAME OF THRONES). It’s a lot like watching a first-person shooter video game. The senior Turasov (Michael Nyqvist, THE GIRL WITH THE DRAGON TATTOO) knows that his son’s days are numbered but that doesn’t mean he’s going to make it easy for Wick. Turasov puts a contract out on Wick before Wick can get to his son. Ah, but that just makes Wick even angrier.

The shooting scenes are relentless. I stopped counting the dead bodies after a while but I’ve read that the number is in excess of 80. The film is also filled with some well-choreographed fight scenes, which should come as no surprise as both directors, David Leitch and Chad Stahelski, are former stuntmen and stunt coordinators. (Stahelski was Reeves’ stunt double in THE MATRIX.) JOHN WICK is their first film in the director’s chair(s).

JOHN WICK benefits from a number of well-seasoned actors (Willem Dafoe, John Leguizamo and Ian McShane), all of whom make the most of their small roles. McShane is one of those actors who could make reading a telephone directory riveting entertainment. In WICK, he plays the owner of a hotel where criminals come for some R & R. He is another one you don’t want to cross, as another assassin unfortunately finds out.

Although the film had style, I felt there could have been more. Wick is a legendary type of character so I would have liked the film to have been more fantastic (in the “fantasy” sense of the word). The colours should have been more saturated, the overhead city shots more Gotham City-like, the lounge singer more ethereal, the club more thumping, and the hotel lobby even more sedate than it already was. Think David Lynch fantastic.

Overall, JOHN WICK is an okay film. It’s definitely not a deep film and you’re not going to be analysing it in the coffee room at the office the next day. But if you like shoot ’em up video games, this one’s right for you.