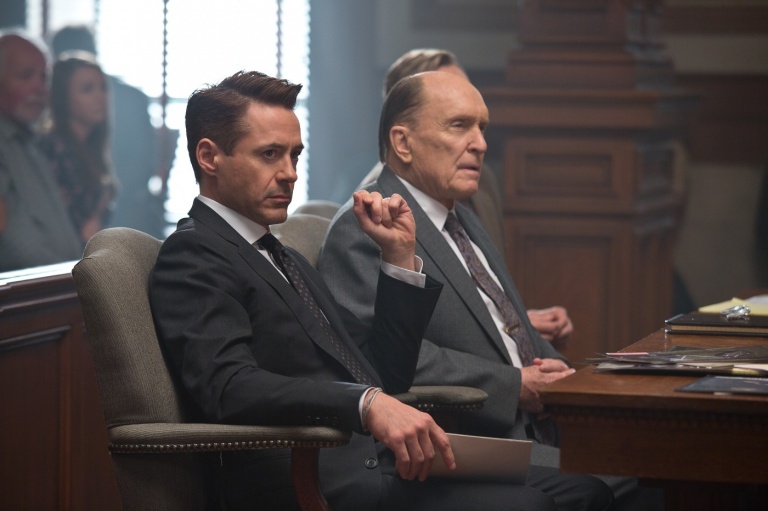 Any film that stars Robert Downey Jr., Robert Duvall, Vincent D’Onofrio and Billy Bob Thornton should be a hands down winner. Unfortunately, THE JUDGE isn’t. Yes, it’s entertaining but this story of a father and son who are forced by circumstances to reconcile their stormy relationship is too long and too clichéd for its own good.

Downey stars as Hank Palmer, a high powered, fast talking, sharp dressing, Chicago trial lawyer who defends rich criminals. He’s more than a bit cocky and he knows it, but he’s really good at what he does and that’s why he can get away with it. When Hank’s mother dies, he decides to return to his childhood home in rural Indiana for the first time in 20 years. Though he plans to make it a quick visit, the day after the funeral, his father (Duvall), the town’s tough-as-nails judge, is charged with murder. Though the judge adamantly refuses Hank’s legal assistance, Hank knows that without it, his father will go to jail. Hank decides to try to reconnect with his father in an attempt to protect his father’s legacy and defend the man’s innocence.

There is a lot good about this film. It features some great one-liners, it’s beautifully shot (by two-time Oscar® winner, Janusz Kaminski). and Downey and Duvall both deliver standout performances. (Can you say “Oscar nomination”?) Unfortunately, the film lacks a solid script and some judicious editing. Halfway through the trial I was already looking at my watch and wondering when the film was going to end. There are more gripping – and faster paced – courtroom dramas on TV. It was the clichés, though, that really did the film in – the very available high school sweetheart, the child who is the result of a one-night stand and who just happens to be studying Law at Georgetown, the unhappy trophy wife, the dedicated elder brother who saw his dream of playing professional baseball disappear with a tragic accident, the possibly autistic younger brother (or was he head injured?), the picturesque diner where the whole town goes for breakfast, the well-timed tornado and much, much more. A few months ago we saw August: Osage County, which is also about children who return home to their dysfunctional families. That film was rich in punchy dialogue and its characters were real and fleshed out. THE JUDGE just has some preachy monologues, a bunch of subplots that go nowhere, and not a lot of palpable tension. (Note to filmmakers: Heavy music is no substitute for good writing and good editing.)

THE JUDGE is directed by David Dobkin, who is best known for the comedy, WEDDING CRASHERS. It is also the first feature release from Team Downey, the production company set up by Downey and his wife, Susan.

I would recommend seeing THE JUDGE (if there’s nothing better to watch) but just know that it doesn’t reach the heights that it could have or should have.

4 thoughts on “Movie Review: The Judge”