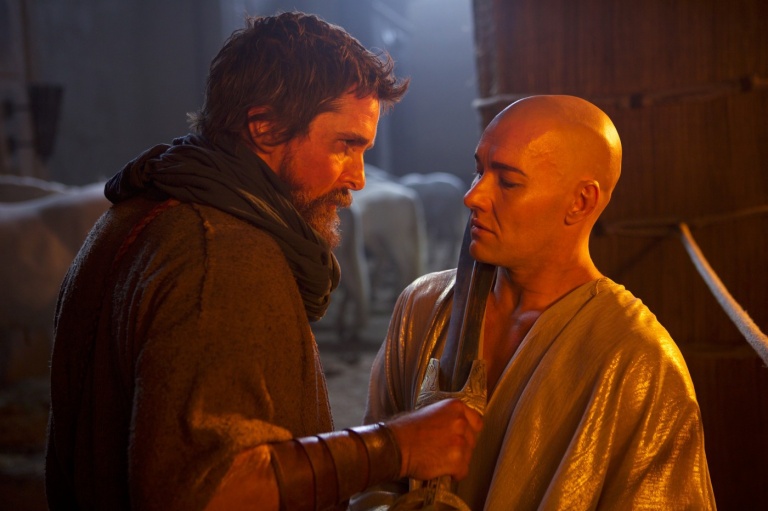 A few months ago we had director Darren Aronofsky’s reimagining of Noah as the world’s first environmentalist; now we have Ridley’s Scott’s reimagining of Moses as an army general. What is wrong with taking the Bible at its word? With such rich source material available, why is Hollywood so obsessed with reinterpreting what is already a good story?

To be fair, EXODUS: GODS AND KINGS is not the Biblical mess that NOAH was. It’s just hugely disappointing. In Scott’s narrative, Moses (Christian Bale) is already an adult by the time the film opens – a trusted nephew to Pharaoh Seti I (John Turturro) and a comrade-in-arms to his cousin, Ramses (Joel Edgerton). We witness his military prowess as he and Ramses rout the nasty Hittites in the Battle of Kadesh. Moses saves Ramses’ life and Seti thinks that the Egyptian prophesy of who the next pharaoh will be has become apparent. But he forgot about another prophesy made many years earlier about a leader emerging to liberate the Hebrew slaves…

For the rest of the story, you would be well advised to read the book instead, as it’s a much more interesting tale than what the screenwriters concocted. The whole business of Miriam placing Moses in a basket, setting him in the Nile to be found by Pharaoh’s sister, Bithiah, and brought up in the palace is left as an “oh, by the way” in the film. The Bible’s recounting of that episode in Moses’ early life is so detailed and exciting, it would have made a more dramatic start to the screenplay.

The same can be said for the ten plagues. Yes, the CGI was well done – numbers 2 (frogs) and 8 (locusts) in particular – but they happened so fast, and with none of the drama that the Bible contains, they were shrugged off by the Egyptians almost as quickly as we, the audience, forgot about them. The hail was another missed opportunity. The Bible describes it as the mixing of fire and water, which only G-d – or CGI – can achieve. Yet, EXODUS’ hail was your garden variety, ping pong-sized balls of ice. Yawn.

Perhaps Scott is an atheist. G-d’s hand and outstretched arm were barely seen either by the Egyptians or by us. This might explain his decision to cast an 11-year-old boy as the embodiment of the Almighty. I didn’t have a problem with that though. Who is to say that G-d can’t be depicted as a child? Why does G-d have to be an old, white man with a beard and a deep, booming voice? Critics, move on, I say. There’s far more to complain about the film than this.

Forget all you ever learned in Sunday School about Moses the Shepherd. EXODUS: GODS AND KINGS is about Moses the Warrior. Unlike Cecil B. DeMille’s Moses in THE TEN COMMANDMENTS, Scott’s Moses led a 600,000 strong army of well-trained guerrilla warriors across the Red Sea. He lacked the charisma of DeMille’s Moses (Charlton Heston) because he wasn’t leading a rag-tag bunch of, well, sheep.

As for the Sea, again, this was a missed opportunity. Of course, Scott couldn’t part the waves the way DeMille did or even Steven Spielberg did in THE PRINCE OF EGYPT (which is also a far more engaging film than this one) but he could have done more than just have the water slowly recede into the Gulf of Aqaba, as if the sea is a giant bathtub whose plug just got pulled. Yes, the giant tsunami wave was a neat effect but it took so long to come back, I got bored waiting for the inevitable to happen.

Curiously, characters that merited a passing mention in the Bible are key characters in this tale while important Biblical characters are relegated to the film’s second string. Nun (Ben Kingsley), whose only reference in the Bible is that he is Joshua’s father, is the Hebrews’ de facto leader in the film. Moses’ brother Aaron, on the other hand, gets just a few seconds of screen time. His sister, Miriam, does marginally better. Even Joshua (Aaron Paul, who is hilarious for all the wrong reasons) fares better than Aaron and he isn’t mentioned in the Book of Exodus until Chapter 33.

Is EXODUS: GODS AND KINGS worth seeing? Yes, it is, for the special effects more than for the acting. But like most film adaptations, the book is much better.