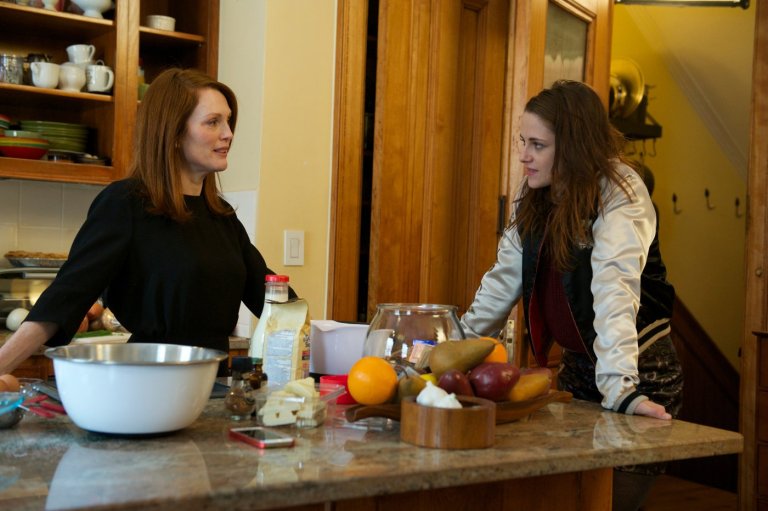 Who said that Hollywood doesn’t love a movie about a person with a disease or a disability? Certainly not me. The disease-of-the-week this time around is Alzheimer’s but STILL ALICE is not your run-of-the-mill tear jerker. Yes, it’s an emotional film but it sits on a slow simmer.

STILL ALICE stars Julianne Moore (DON JON) as Alice Howland, a happily-married, 50-year-old linguistics professor at Columbia University in New York. Almost everything is going right for Alice. She is renowned in her field, her husband is an equally successful medical researcher, they live in a beautiful brownstone in the Upper West Side of Manhattan, they also have a weekend house on Long Island, their eldest daughter is a happily-married lawyer, their son is in medical school, and their youngest daughter… well, their youngest daughter decided to forego university and head out to Los Angeles to become an actress. You can’t have it all, I guess. But Alice’s life takes a sudden turn when her memory begins to fail her. Her husband is quite dismissive at the start, saying that memory lapses are part of growing old but Alice believes it’s more than that.

We are introduced to Alice’s changing world as she goes running on campus one afternoon. Everything around her is slightly out of focus. Alice thinks she has a brain tumour but the diagnosis, it turns out, is even worse. She has Early-Onset Alzheimer’s Disease. To her and to us, it seems counter-intuitive. Alice is doing everything right – she eats well, only drinks socially, doesn’t smoke, takes a multi-vitamin and flax seed every day, runs, gets enough sleep each night, doesn’t take any medications – yet she has the disease. As her doctor explains, it’s rare for someone as young as Alice to be affected but it’s not out of the realm of possibility.

There is a very interesting juxtaposition between the two lectures that Alice gives in the film. The first, to a group of educators, speaks about “baby steps” in approaching language acquisition and communication. The second lecture is to a group of Alzheimer’s patient care givers. Here we see how “baby steps” works in the other direction too. Little by little, language — Alice’s identity — is being taken away from her.

As the disease progresses, Alice realises that she needs to let go of who she was and what beliefs she holds on to. She articulates her feelings quite concisely to a colleague: She wishes she had cancer instead of Alzheimer’s because she would feel less ashamed. There is a very touching scene where she plans her suicide. She makes up a test for herself and when the time comes that she fails it, she will know what she has to do. It’s a tragic realization of how devastating this disease is to one’s self-image.

Do you like what you’re reading? Why not sign up to receive my movie reviews in your inbox every Thursday or Like my Facebook page? Too much of a commitment? How about commenting below or giving it a star rating?

STILL ALICE is based on the debut novel by Lisa Genova, an American neuroscientist and writer.

Some critics have taken this film to task because of the narrow characterisations of Alice’s husband and kids. My first thought after watching this film was the same. Take Alice out of the equation and we really don’t know that much about the others. I’ve since changed my mind though. To start, this is a film about Alice so I believe the writers can be forgiven for not giving as much colour to the other characters. Secondly, I’ve seen families that completely revolve around one person in that family and, as soon as that person is gone (whether through death or divorce), the family unit crumbles away. This is how I see Alice’s family. On the surface, they are a very typical upper middle class, high achieving family. They have their issues with each other but they love each other too. However, they love themselves more than they love each other. The husband accepts a job halfway across the country just when his wife needs him most. The eldest daughter chooses to sit on her own at her mother’s lecture, rather than sitting up front with her mother and brother. On the surface, this seems like a close family but deep down they’re not close at all. Once Alice goes into a treatment facility, they will all drift apart.

Julianne Moore does a superb job as a woman who sees her identity getting stripped away from her word by word, memory by memory, and there is nothing she can do to stop it. (She does try.) It was at about this time last year that I was predicting that DALLAS BUYERS CLUB and its two stars, Matthew McConaughey and Jared Leto would win big at the Oscar® awards and I was right. This time around, I’m predicting that Julianne Moore will get the Oscar® for Best Actress.

Kristen Stewart (CLOUDS OF SILS MARIA) puts in another solid performance as Alice’s younger daughter, Lydia. One would expect Lydia to be the first one to bail on Alice but it turns out that she’s the only one with compassion. The only weakness in the film comes from Alec Baldwin, who plays Alice’s husband. He is as believable as a piece of plywood. It’s a shame because he and Moore are friends, having worked together in the TV show, 30 ROCK. (She played his high school flame in a few, very comedic episodes.)

All in all though, STILL ALICE is a very powerful film. I’ve heard of people who have or have had a parent who suffered from Alzheimer’s not wanting to see this film for fear that it would be too hard to watch. That may be so but for the rest of us, I highly recommend it if only to raise awareness of the disease.

A few months ago, country music legend Glen Campbell, himself struggling with Alzheimer’s, released a song about his journey with the disease. It was featured in a new documentary about him entitled I’LL BE ME. The song is entitled “I’m Not Gonna Miss You”. Take a look: