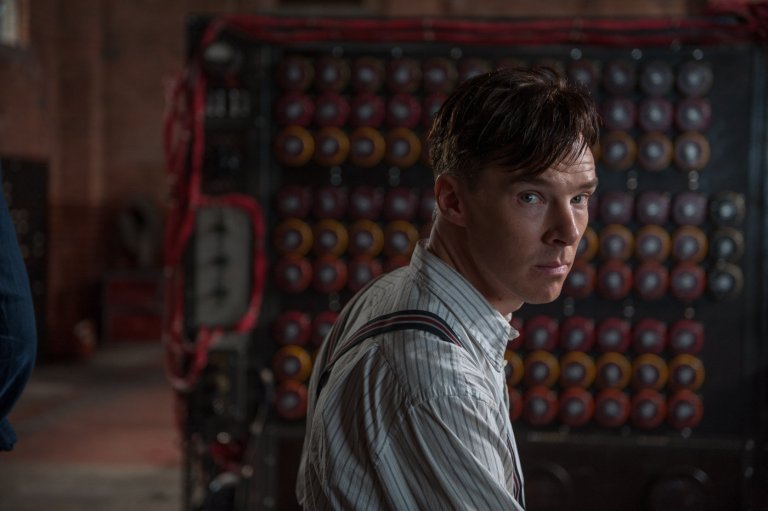 I had thought that if a Brit was going to win the Best Actor Oscar® this year it would have been Benedict Cumberbatch for his portrayal of math (or maths, as the Brits say) genius and codebreaker Alan Turing but it was not to be. Although THE IMITATION GAME plays loose with historical facts, this is a great film with some fine performances, including one from Keira Knightley, who seemed to be channeling her inner Kate Winslet.

The story of the group of men and women who worked at Britain’s code-breaking centre at Bletchley Park leading up to and during WWII was protected by the Official Secrets Act up to 1974. Their work was to break the “Enigma” code, which the Nazis were using for their air, sea and land movements. The Poles had broken an earlier version of the code in the 1920s but, by the start of the war, the Germans had made the Enigma machines ten times more complex, allowing them close to 159 quintillion possible code combinations – that’s 159 with 18 zeros after it! The Allies found themselves unable to keep up with the changes that the Nazis were making to the code every day.

Turing was one of an elite group of mathematicians, logicians and linguists who were brought in by MI-6 to turn the tide. He devised improvements to a pre-war Polish electromechanical codebreaking machine (called a “bombe”) and his machine was ultimately able to crack the code with enough speed to allow the Allies to thwart the Germans’ military movements. Unfortunately, war and espionage being what they are, the Allies couldn’t allow themselves to be too effective at stopping the Germans for fear that their enemy would realise that their code was finally broken and create something new to replace it. Nevertheless, the work of Turing and his colleagues was credited with not only reducing the length of the war by between two and four years, it also resulted in a successful outcome for the Allies – something that was not assured when they began their work.

THE IMITATION GAME is more than a film about breaking a seemingly unbreakable code in the nick of time thus saving the world. It’s about a man who was different; who felt like he didn’t belong. Like the machine he was trying to break, Turing was quite the enigma himself. “Brilliant”, “driven”, “socially awkward”, “infuriating”, and “condescending” are just some of the words that can be used to describe him. “Homosexual” was another, and it was that characteristic that did him in. Back then, being gay was a crime. Thanks to a determined police constable who was investigating a simple break in at Turing’s Manchester home in 1952, his secret was ultimately revealed. Rather than going to jail, Turing agreed to chemical castration – injections of estrogen to reduce his libido. A few years later, at age 41, Turing died of cyanide poisoning. It was thought that he may have taken his own life although that determination is still in doubt. He may have inhaled the poison in the course of his work.

The film flashes back to Turing’s middle school days where both his genius and sexuality are blossoming. Back in Bletchley’s Hut 8, Turing calls his bombe “Christopher” – the name of his best friend and, apparently, “first love” at Sherborne School. Though nothing sexual between the two young boys is shown to us, it is clear by his love for his machine that he did have deep feelings for his friend.

The adult Turing finds friendship and understanding in Joan Clarke (Knightley), whom he hires for the team after she completes his entrance test in record time. The two quickly realise that they are both outsiders. Cryptography is not woman’s work (at least it wasn’t back then), so Turing and Clarke devise a way that she can still be part of the team but maintain the appearance that she is doing something that is acceptable to society. Turing offers to marry Clarke to make them both “honest” but ultimately must take it back. Clarke, though, is more than just a beautiful mind. She understands how the world works far more clearly than Turing does. What she wants – equality and challenge – far outweighs being in a sham marriage.

The film itself follows a fairly conventional route offering no surprises, twists or turns along the way. Perhaps to maintain its PG-13 rating (Category IIA in Hong Kong), any love scenes – homo or hetero – are absent as well. This is somewhat disappointing as we’re left wondering what, if anything, Turing did with his schoolmate, and who broke into his house and why. Cumberbatch’s performance, however, is top-notch as the man who was as tough to crack as the code he was trying to break. It is very sad that once Turing’s secrets were laid bare for the world to see, it cost him his life.

If you haven’t seen it yet, check out screenwriter Graham Moore’s acceptance speech at this year’s Academy Awards®: