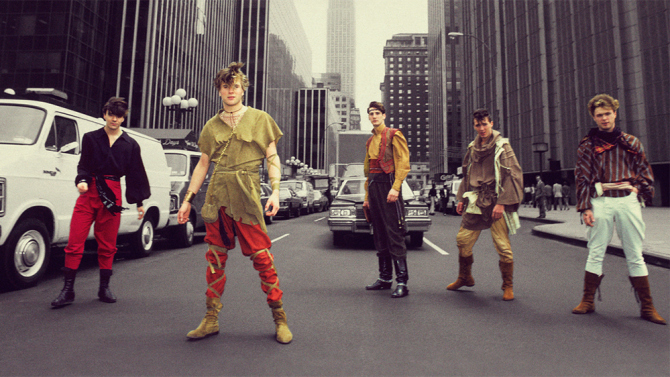 Funny how it seems that just when a band embarks on a world tour, along comes a documentary about them. I know this much is true with SOUL BOYS OF THE WESTERN WORLD, the new film about ’80s UK boy band, Spandau Ballet.

Hailing from humble, council house beginnings in north London, the five lads were all school friends (two are brothers) and they formed their first band in 1976 when they were barely into their teens. Frequenting Soho’s now iconic Billy’s and Blitz clubs in the late 1970s, they latched onto the eccentric hipster fashion — if not quite the music — of the scene there. After a few name changes and one personnel change, they became Spandau Ballet in 1979 after a columnist reported seeing the words scrawled on a wall of a Berlin toilet. Their popularity grew, as did other so-called “New Romantics”, including Duran Duran, Boy George and Visage. In 1981, they struck gold with an appearance on the British TV show, “Top of the Pops”. This event launched their careers on the global stage, leading them to become, as we are told in the film, one of the most iconic groups of the ’80s.

What? I don’t think so! Duran Duran and Boy George had far more influence on pop culture than these boys did. While Spandau Ballet were masters at merging music, fashion and video, their salad days were very short-lived. After scoring a few megahits (anthem/bar mitzvah party songs, if you will) and an appearance at Live Aid in 1985, the boys started drifting apart. The Kemp brothers wanted to pursue acting (which they did very well in the 1990 film, THE KRAYS) and, in interview after interview at the time, it became painfully obvious that while Tony Hadley was the voice of the band, Gary Kemp, who wrote all the songs, held all the power (and the royalties, in case you forgot or didn’t know about the court battle in 1999).

May all the Spandau Ballet fans forgive me for saying that I found SOUL BOYS OF THE WESTERN WORLD a tad narcissistic. The film’s commentary comes solely from the five guys (and some of that sounds scripted) so we’re not presented with opinions from others who were there at the time — cultural icons like Vivienne Westwood, fellow ex-New Romantics like Midge Ure, even fans. It all seems rather self-serving and vain. (Not surprisingly, a soundtrack album is expected to be released shortly along with a new album collection featuring three new songs.) Interestingly, or perhaps unfortunately, there is no contemporary footage used in the film. It’s all archival material.

There is no question that fans of the group will enjoy this film. I admit to having “Gold” and “True” (as well as P.M. Dawn’s “Set Adrift On Memory Bliss”, which samples “True”) in my music collection but this film didn’t make me want to pull out my credit card and download a few more of their tunes. It did make me appreciate Tony Hadley’s soaring vocals all the more but I won’t be buying a ticket to their show should they decide to come here. (They’ll be in Singapore in September so chances are good that they’ll be coming to HK too.)