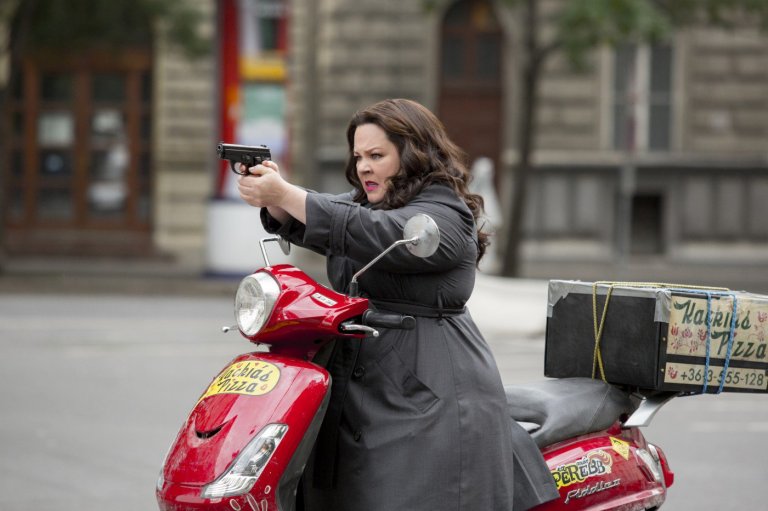 Teaming up funnywoman Melissa McCarthy (ST. VINCENT) with Jude Law (the SHERLOCK HOLMES franchise) and Jason Statham (THE EXPENDIBLES franchise) seems like an idea that can only end in box office disaster but somehow SPY manages to hold it together… barely.

The film starts off on a serious note with Law playing James Bond-esque CIA operative, Bradley Fine, who shoots, kicks and flips his way through a labyrinthine basement en route to a fateful meeting with a Bulgarian arms dealer who has a portable nuclear device in his possession. McCarthy plays Susan Cooper, Fine’s high tech handler back at the agency’s headquarters, who warns him of any incoming trouble and acts as his personal assistant on the side. But when Finn’s adversary dies before he could learn where the device is hidden, we know we’re in for a spy spoof. The wink to 007 continues when the story cuts to the title sequence that features lava lamp-styled graphics and even includes an overproduced theme song (“Who Can You Trust”) that would feel very much at home in any Bond film. (Shouldn’t it be “Whom Can You Trust?” Just saying.)

Unfortunately, the film starts its bumpy decline downhill from there. After all the other agents’ identities are compromised by a mysterious mole, Cooper is given the opportunity to go undercover. Her dreams of glamour, mystery and intrigue are quickly dashed though, when the agency’s equivalent of Q provides her with some less than sexy, low tech tools of the trade. The parade of overweight, fish-out-of-water, single woman jokes has begun. Fortunately, McCarthy is no stranger to this type of humour – we’ve seen it all before (TV’s SAMANTHA WHO?) – and the script takes full advantage of her ability to be masterfully self-deprecating. Statham, who plays the overconfident CIA agent (with a rough-and-tumble British accent), Rick Ford, thinks Cooper is in way over her head and he follows her to Paris to not just keep an eye on her but to heap abuse on her too. Cooper’s zeal and quick thinking win out and, after she saves Ford’s life, she is allowed to go deeper undercover. She is given a new identity – one that is just as unflattering as before – and is sent to Rome to find the bomb. (Cue more jokes about being overweight, unattractive and helpless.)

As Cooper settles into her new life as a covert spy, she takes it on with complete relish. In one scene, she verbally abuses a man for being weak – the very thing that Ford accuses her of. These are the best scenes in the film but, unfortunately, they are spaced too far apart to maintain any momentum. Weak script writing is the culprit here, as evidenced by the “F” word being sprinkled about like salt on a batch of Mickey D’s French fries.

SPY is written and directed by Paul Feig, who also directed the films, BRIDESMAIDS and THE HEAT, both of which also starred McCarthy. (He is also co-writing and directing the fem-reboot of GHOSTBUSTERS, which will star McCarthy as well.) While McCarthy brings much needed energy to this film, and the scenes with her and Statham are enjoyable to watch, it’s not enough to carry it for almost two hours. Bobby Cannavale (CHEF), who enters the film halfway through, wipes away the smiles on the audience’s faces with his foppish portrayal of De Luca, an Italian arms dealer who, for some unknown reason has a New Jersey accent. He should have taken some dialect coaching from Peter Serafinowicz, who plays an Italian secret agent with a very convincing accent.

As far as date night movies go, this one is a safe bet – “F” words notwithstanding. It’s a bit too long and the laughs don’t come often enough but it’s not a bad film. One day, I hope, McCarthy will have a film that is truly worthy of her talent.