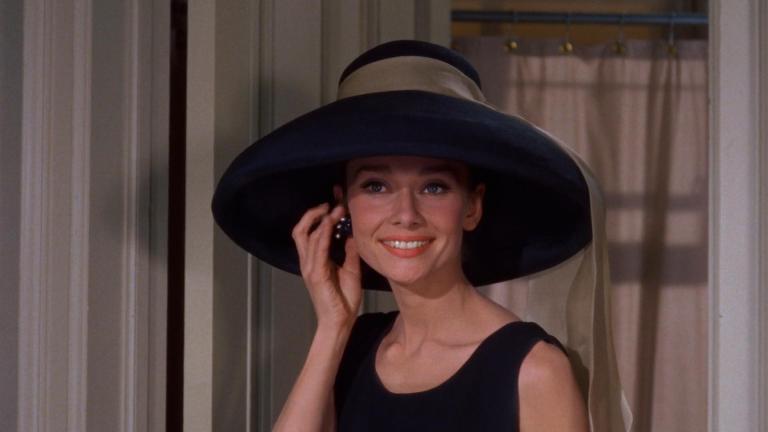 I can’t remember how it hit my radar but last week I decided to read Truman Capote’s novella, Breakfast at Tiffany’s. Although I had seen the movie a couple of times over the years, I had never read the book and I had heard it was very different from the film. Now that I’ve read it, I can attest to that being an understatement!

Who doesn’t love BREAKFAST AT TIFFANY’S (the movie)? Audrey Hepburn’s depiction as the hard-on-the-outside/soft-on-the-inside, New York socialite, Holly Golightly, is forever burned into our collective conscience. The iconic little black dress is still recognised by fashionistas as the one “must have” item of clothing for women. (When Christie’s auctioned the film’s original LBD in 2006, it sold for over US$900,000.) Tourists the world over still make a pilgrimage to Tiffany & Co’s flagship store on Fifth Avenue to gaze into its windows, danishes and coffees in hand. And the film’s theme song, Moon River, is still being played on radios and in piano bars all over the world, 54 years after it was released. (I’ll never forget being in a karaoke bar in Japan many years ago and hearing a Japanese man singing “Moon Reeba”!)

The story plays out like an early episode of TV’s MAD MEN what with all the parties, drinking and smoking going on, but director Blake Edwards’ (THE PINK PANTHER series; VICTOR VICTORIA) BREAKFAST AT TIFFANY’S is a much sanitised and cheerful version of Capote’s original dark story. In the novella, Holly is just 19 years old – we know that from her husband – and she is much more of a free-spirit than the film’s Holly is. (Hepburn was 31 at that time, though she did look much younger.) Capote’s Holly was bisexual and had smoked marijuana. While that seems almost tame by today’s standards, movie audiences in 1961 were not ready to see such debauchery on the screen. Paul (played by George Peppard in the film) is similarly transformed for the big screen. In the novella, “Fred” (we never learn his real name) is certainly much younger than Peppard’s age of 32. He, too, is probably 19, as he is just beginning his career as a writer. If he has a married woman as a lover/patron, we certainly don’t know it. The character of 2-E (played by Patricia Neal in the film) is pure Hollywood screenwriter fiction. We also learn that his draft board starts showing interest in him when he loses his job. If he were 32, the board wouldn’t be so eager to draft him into the army. That’s another difference between the film and the novella. The film is set in contemporary times (i.e., 1961) while the novella is set in 1943, right in the middle of World War II when the government would have wanted to draft an unemployed, 19-year-old man into the army.

There has been much speculation over the years over who was the inspiration for Holly Golightly. Capote was very much the celebrity back in the late ’40s when he wrote the novella and there was no shortage of socialites in his entourage. Comparisons have been made to heiress Gloria Vanderbilt, Oona O’Neill (daughter of playwright Eugene O’Neill, who later married Charlie Chaplin), and modelling icon Dorian Leigh. Capote once admitted that actress Carol Grace (who later married actor Walter Matthau) was a large inspiration to the character but he later claimed there was a real Holly who lived downstairs from him in New York in the 1940s. My feeling is that Holly Golightly was a composite of all these people plus one other – his mother, Nina, who was born Lillie Mae Faulk. (Holly’s real name was Lullamae.) As for who was “Fred”, it’s obvious that it was Capote himself. They are both writers, they share the same date of birth (September 30) and Capote was 19 years old in 1943. In the novella, he never develops a sexual relationship with Holly (though many others did), which would fit the thesis that his mother is a part of Holly. Just as Holly chased after a Brazilian diplomat, Nina married Cuban-born textile broker, Joseph Capote, after she divorced from Truman’s father.

Even today, BREAKFAST AT TIFFANY’S still tugs at the heartstrings, thanks in large part to Hepburn’s charm, looks and timing. They don’t make movie stars like her anymore! The film, though, it’s not without its detractors for reasons other than the whitewashed screenplay. Mickey Rooney was cast as Holly’s upstairs neighbour, Mr. Yunioshi, a role that in today’s light is blatantly racist but, back in 1961, would have been quite amusing to watch. It was only 16 years after the end of World War II and America’s feelings towards the Japanese were still very raw. Bucktoothed and myopic stereotypes would very much have been fair game back then. Edwards said in an interview before he died that he didn’t think twice about casting Rooney as a Japanese person. (He wasn’t the only director at that time to make that kind of casting decision. Mervyn LeRoy directed Alec Guinness to play a Japanese man in the 1961 film, A MAJORITY OF ONE.) However, Edwards said, “looking back, I wish I had never done it… and I would give anything to be able to recast it.” Rooney took an indifferent position on the matter saying, “Those that didn’t like it, I forgive them and God bless America, God bless the universe, God bless Japanese, Chinese, Indians, all of them and let’s have peace.”

The American Film Institute’s (AFI) “100 Years…100 Passions” ranks what its members think are the 100 greatest love stories of all time. BREAKFAST AT TIFFANY’S came in at number 61 – not bad considering it wasn’t born as a love story. If you haven’t read the novella yet, I would encourage you do so and then watch the movie. I guarantee you’ll never see the movie in the same light again.

Note how the announcer mispronounces Truman Capote’s last name in the trailer (below). You’d think the producers would have known better!

2 thoughts on “Movie Review (Looking Back): Breakfast at Tiffany’s”