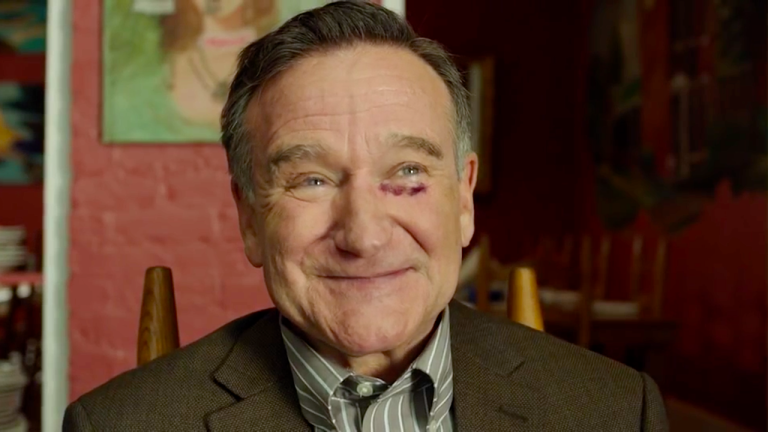 Just the other day I was chatting with a friend about a certain religious leader in the US who recently announced he was gay. I asked my friend, who used to pray at his house of worship, if she thought that the man’s wife knew all along. (They had been married for 20 years.) My friend didn’t think the woman knew but I disagreed. I think she knew but chose not to acknowledge it.

The film, BOULEVARD, tells the story of a 60-year-old closeted gay man who sees his mortality creeping up on him and decides it’s time to turn off the road he has been on his whole life and onto another one. Masterfully played by Robin Williams (GOOD MORNING, VIETNAM) in his final dramatic role, Nolan Mack is a loans manager at a roadside savings & loan in Nashville. Nolan’s whole life has been on autopilot. He has been a dutiful employee at the branch for 25 years, just as he has been a dutiful husband to his wife, Joy (Kathy Baker, perhaps best known for her role in TV’s PICKET FENCES) for even longer. We see that he is a dutiful son to his father, who is lying is a semi-conscious state in a hospital, and we learn that he was a dutiful son to his mother who died six months previously. He’s also a dutiful friend to Winston (Bob Odenkirk, NEBRASKA), a literature professor who has a penchant for women half his age.

But Nolan is visibly and profoundly unhappy as he goes through the motions of life. One night, on the way home from visiting his father, Nolan decides to check out the prostitutes who are soliciting clients across the road from where his car is stopped for a light. On an impulse, he does a quick U-turn at the intersection and nearly runs over a young man in the process. The man, Leo (Roberto Aguire), thinks Nolan wants sex so he asks to get in the car, to which Nolan agrees. But Nolan isn’t sure what he wants. He’s been living in the closet for so long and he has never hired a prostitute before. He takes Leo to a seedy motel and tells him that he just wants to talk. For the first time in his life, Nolan can be authentic.

Nolan and Leo begin to have a relationship of sorts, though it’s not a sexual one. Nolan tries to become a father figure and protector to Leo (earning himself a black eye in the process), but Leo neither wants those things nor knows how to accept them when he gets them. He’s been a hustler for too long and that’s all he wants. Joy, meanwhile, knows that something is up. Although the couple has been living separate lives and sleeping in separate beds for years, if not for their whole marriage, she still loves him and is not prepared to give him up so easily. Though she catches him in a number of lies, she lets them slide. She knows in her heart that he’s with a man – not a woman – but she chooses not to know. She would rather be blindly married to a dutiful man than divorced from a gay man.

Events come together and Nolan must make a decision – continue on the road he’s been on his whole life or start down a new one. Although the hard talks with Nolan’s loved ones are inevitable, only one comes with a surprise result.

There have been a number of other films dealing with people who come out of the closet late in life (the 2010 film, BEGINNERS, starring Christopher Plummer comes to mind) so there is nothing groundbreaking about BOULEVARD. However, Williams elevates this film from the standard fare with his performance as the emotionally shuttered Nolan who finally decides to open himself up. His role is a sad one but it’s an apt finale to the career of such an apparently deeply troubled man. We can only speculate on how much of the sadness that we see in Williams’ eyes is genuine and how much is put on.

BOULEVARD will be screened twice at the upcoming Hong Kong Lesbian & Gay Film Festival – September 25th and October 1st. It is also available on DVD and through digital download.