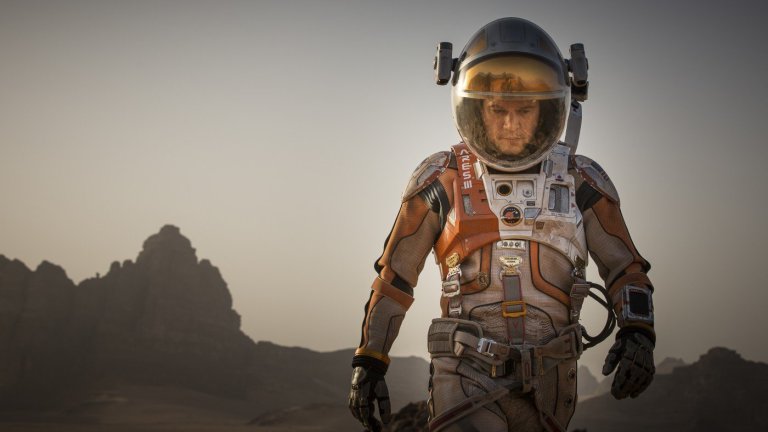 When a fierce storm on Mars cuts off astronaut Mark Watney (Matt Damon) from his colleagues, they fear the worst. Their commander, Melissa Lewis (Jessica Chastain, A MOST VIOLENT YEAR), has to make a critical decision. Blast off, leaving Watney behind, or stay and risk the lives of all the crew. She chooses to leave, not knowing that Watney is still alive. For Watney, his options are clear. Another mission to the Red Planet isn’t expected for four years and he has enough food to last for 50 days. He needs to “science the shit” out of everything to stay alive until help can come.

THE MARTIAN is director Ridley Scott’s (EXODUS: GODS AND KINGS) latest masterpiece… and it is a masterpiece. Sometime, hopefully in the near future, a few brave/lucky/crazy men and women will travel 140 million miles to Mars. For the rest of us, this film is the closest we’re going to get. But for 134 minutes, we’re right there with Watney and the team from NASA, through every success and failure (and there are plenty of both) as they push themselves to find creative solutions that will keep Watney alive and bring him home.

Thankfully, this is not a story about American patriotism or even American ingenuity. It’s a story of perseverance, having a can-do attitude, cooperation and, most of all, how science can be sexy. There, I said it. Sexy science. (Who knew? To tell you the truth, I did. Just like Watney, I also majored in Botany in undergrad.) I have no doubt that NASA and other space agencies around the world will receive a flood of applications to their astronaut training programs in the coming months, but if it just means that more kids will want to study science in school, I’ll be satisfied.

By now, the backstory of this story is legendary. Author Andy Weir, a computer programmer and himself the son of a particle physicist father and an electrical engineer mother, first put the book on his website in 2011 where he serialised it for free one chapter at a time. At the request of his fans, he then self-published it through Amazon, pricing it at just 99 cents, which is the minimum price allowed. The Kindle edition quickly sold 35,000 copies, garnering the attention of a number of publishers who had previously rejected his manuscript. In 2013, he sold the print rights to Crown Publishing Group for just US$100,000. (I hope he got a lot more than that for the movie rights.)

The book was adapted into a screenplay for the film by Drew Goddard, who started his career as a staff writer on the TV series BUFFY THE VAMPIRE SLAYER and its spinoff, ANGEL. He later penned the screenplay for the 2008 film, CLOVERFIELD, and shared co-writing duties on the 2013 film, WORLD WAR Z, which starred Brad Pitt.

This is Matt Damon’s best work in years. He plays Watney as a guy who is both nerdy and cool at the same time. We cheer for him because he’s Mr. Spock with a sense of humour and humanity. Many critics have made comparisons between Watney and Chuck Noland (Tom Hanks’ character in the film, CAST AWAY). More than that though, are the similarities between Watney’s GoPro camera (itself a star of the film) and Noland’s volleyball, Wilson. In THE MARTIAN, we travel along with Watney on his journey as he documents both his work and his mood to the video camera. It’s a much better narration device than having dead silence or watching the guy mutter to himself as he goes about his activities.

The film’s supporting cast of Chastain, Chiwetel Ejiofor, Jeff Daniels, Sean Bean, Michael Peña, Kristen Wiig and others all bring “the right stuff” to the film as well, making it a real delight to watch (much like the cast of APOLLO 13 did with that film). Entertainment Weekly, in its review of the book in 2014, was less than impressed with Weir’s treatment of these secondary characters. Not having read the book, I don’t know if EW was just being harsh or if the characters were more fleshed out for the movie.

Although I thought it was an excellent film, I did have a couple of nits that needed picking. For me, the planet wasn’t forbidding enough. The sky wasn’t red (or butterscotch) enough, the temperature wasn’t cold enough (temps there apparently average minus 63 degrees C), and the gravity wasn’t weak enough (62 percent that of Earth, apparently). I was expecting Mark to bounce around a bit as he was walking, which didn’t happen at all. I also had a problem with the Chinese space agency coming to NASA’s rescue. I understand that this wasn’t changed from the original but, to me, it seemed like a nice way to get Chinese government approval of the film and more box office revenue. (Perhaps Andy Weir was thinking down the road when he wrote the novel.)

Definitely go see this film – it’s an Oscar contender. If you decide to see it in 3D (as I did), make sure you sit in the middle of the cinema for the best view and the best light.

16 thoughts on “Movie Review: The Martian”