I know I’ve said it before but it bears repeating. I prefer films that make me think and reflect over those that rely on explosions or other special effects to entertain. If you’re like me, you’ll be interested to know that this year’s German film festival, Kino/15, will run in Hong Kong from October 22nd to November 2nd. This is one of Hong Kong’s better film festivals. Germany makes some great films and their opening night party, outside the HK Arts Centre in Wanchai, always serves up some delicious German food and beer!

Ten films will be screened at this year’s event. Here is a sampling of three of them:

We Are Young. We Are Strong.

It’s no accident that this is the festival’s opening night film. The big news story from Europe this year has been about the waves of migrants who are making their way from countries where their own governments have failed them politically, economically, socially and religiously. Germany has already announced that it will absorb 800,000 of these migrants – a number that is leaving economists scratching their collective heads wondering how the country will be able to afford it. Sociologists, meanwhile, are wondering if every day Germans will accept having so many foreigners in their midst. It was only 23 years ago that anti-migrant attacks took place in the Lichtenhagen district of Rostock.

WE ARE YOUNG. WE ARE STRONG. recreates the violent events of August 1992. It follows a group of disaffected, young men and women who rebel against authority by turning against the Roma, Romanian and Vietnamese immigrants who are being housed at the Sunflower Tower in Rostock. The story centers on three characters: Stefan (Jonas Nay) is part of this mixed group of neo-Nazis, leftists and anarchists who are targetting the foreigners, though his heart really isn’t in it. He’s just bored with life and it’s a way for him to pass time with his friends. Stefan’s father, Martin (Devid Striesow, THE COUNTERFEITERS), is a local politician. The growing xenophobia isn’t helping his chances for re-election. He believes that modern Germany should be multiethnic but he knows his constituents are turning away from that ideal. He also knows that he has no control over his son. He probably lost that years ago when his wife exited the picture (presumably through death, though we’re not sure). Lien (Trang Le Hong) is a Vietnamese immigrant living at the housing estate along with her brother and his wife. She’s trying hard to integrate into German society. She’s learned German, works hard at her job, and is just about to receive her permanent residency papers. She wants to stay and build a life for herself in Germany but does Germany want her?

Shot in black & white, the film is directed by Burhan Qurbani, himself the son of Afghan immigrants to Germany. His 2010 film, SHAHADA, was nominated for the Golden Bear at the Berlinale that year.

WE ARE YOUNG. WE ARE STRONG. is not an easy film to watch. It’s slow burning but its message in the closing scene makes it well worth the wait.

The director will be in attendance at the second screening on October 31st. 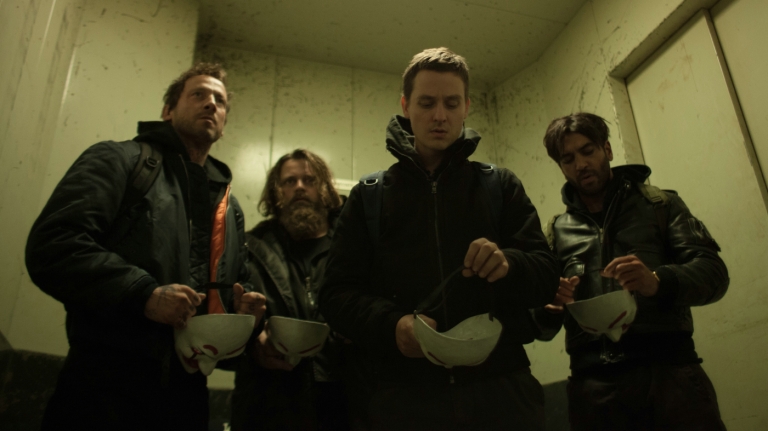 Cybercrime is big business these days and big companies from Sony Pictures to US retailer Target are the victims. Scratch that. We are the victims because it’s our personal data that is being snapped up by these criminals.

WHOAMI? tells the story of Benjamin (Tom Schilling, A COFFEE IN BERLIN), a loner who is also a computer whiz. After he fails to successfully hack into a university database (to secure exam answers for a girl he likes), he is sentenced by a judge to clean the streets. One night on the street, he meets Max (Elyas M’Barek), who is also serving a sentence doing community service. The two get to talking and find out that they both are into hacking. Even better, Benjamin has a skill that Max and his two friends don’t have – he’s good at hacking machine code.

Very quickly, the four guys embark on small time pranks, from overriding billboard messages to stealing a van. They post their antics on YouTube and get a small following but they can’t seem to catch the attention of the king of the hackers – MRX. They devise an elaborate plan to not only get noticed but even bring MRX down. However, they get noticed by the EU cybercrime police unit and it becomes a cat-and-mouse game to launch their plan before they get caught.

Don’t bother analysing the plot of WHOAMI? too closely because you’ll see it has more holes in it than a piece of Swiss cheese. Instead, just enjoy the ride because it’s a good one. Schilling turns in a great performance as your typical computer nerd who gets caught up in the excitement of being both popular and successful for the first time in his life.

I’m a big fan of TO LIFE!’s two stars – Hannelore Elsner (GO FOR ZUCKER!) and Max Riemelt (THE RED COCKATOO). In this film, Elsner plays Ruth, an aging Jewish cabaret singer whose best days are long behind her and she knows it. Riemelt plays Jonas, a young man who looks ahead to his future and only sees despair. Jonas works for a relocation company that is tasked with moving Ruth and her belongings from her warm and cluttered house to a tiny flat in a drab public housing estate. When Jonas discovers that Ruth has tried to commit suicide, he rescues her and gets her to the hospital. Having nowhere to live, he decides to move into her flat while she is recovering. Bored, he starts unpacking her things and uncovers some old home movies. He sees Ruth as she was – young and vivacious – but that’s not what surprises him. Ruth’s lover back then is the spitting image of Jonas. Were Ruth and Jonas brought together by chance or by fate? Either way, they form a bond as they begin to understand each other’s motivations. It seems that while Ruth hasn’t much to live for, she still wants to live. Jonas, on the other hand, has a lot to live for but he wants to die.

TO LIFE! is a bittersweet tale of friendship, love and hope. It features solid performances by the two main actors and some great Yiddish music classics sung by Sharon Brauner (niece of EUROPA EUROPA producer Artur Brauner), who plays Ruth in her younger days.

For more information about Kino/15, visit the Goethe-Institut’s website at http://www.goethe.de/ins/cn/en/hon/ver/hon15.html.