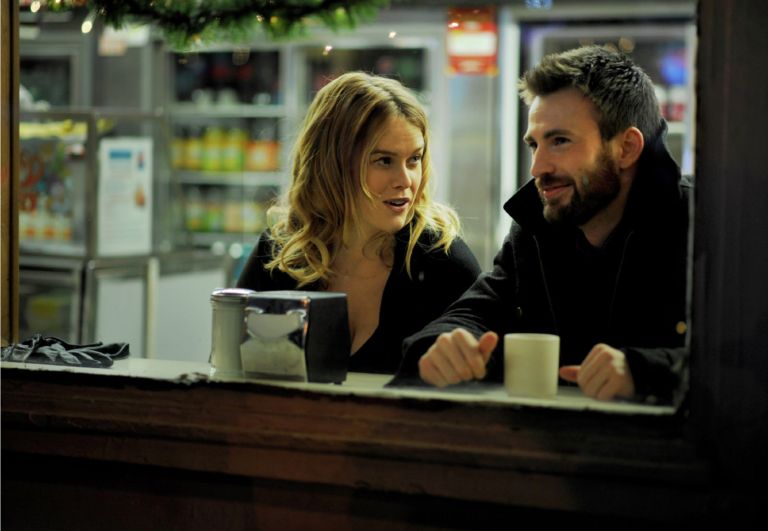 I know that Frank Sinatra and countless others have sung that New York is the city that never sleeps but who knew it was positively insomniac? In actor Chris (Captain America) Evans’ directorial debut, musicians arrive to perform at corporate parties at 2 am, wedding receptions are in full swing at 3, and the streets are busy with people and cars at 4. And all of lower Manhattan is lit up like a Christmas tree at 5. Yeah, right.

Nick (Evans) is busking on his trumpet in the cavernous main concourse of Grand Central Station (where busking may not even be allowed anymore) at 1:30 in the morning when Brooke (Alice Eve, SHE’S OUT OF MY LEAGUE) rushes past him, dropping her phone on the stone floor. She’s trying to catch the last train of the day to Boston but she’s seconds too late and it leaves the station without her. Rather oblivious, or perhaps uncaring, that she lost her phone in her mad dash, she walks past Nick again where he returns the now-broken phone to her. The station is closing for the night and the two of them have to leave. Nick strikes up a conversation with Brooke and offers to help her out. Not surprisingly, Brooke is somewhat leery about this handsome stranger but she has no choice. Her purse had been stolen earlier that evening and all she had on her was her phone and her train ticket. (I can’t quite figure out how she had money to buy the ticket if her purse was stolen… unless someone bought it for her. It was never explained but that’s neither here nor there as there are plenty of other head scratching moments to come.) Brooke accepts Nick’s offer and the two strangers romp around midtown and lower Manhattan together – a distance of at least 3 kms – in the wee hours of the morning as they to find a way to beat the clock. We learn that Brooke needs to get home before her husband returns from his business trip to Atlanta.

If this story sounds somewhat reminiscent of Richard Linklater’s BEFORE trilogy starring Ethan Hawke and Julie Delpy, you’re not alone in that thought. But Hawke and Delpy had a few things going for them that Evans and Eve do not – chemistry and a believable script. Yes, Nick and Brooke are both incredibly photogenic and New York does look beautiful with all those shimmering lights but this story is a real yawner. Because Brooke distrusts Nick’s motives, we never get emotionally invested in their relationship, and when something does happen (sort of), it rings false. At any point, Brooke could have walked into a police station and asked to use their phone. She had a number of options available to her (asking a friend to pay for her bus ride home, diverting her husband to New York, …) but instead she chose to hang out with Nick and be bitchy for most of the night.

Meanwhile, Nick is no great catch either. It seems that he’s been carrying a torch for his ex-girlfriend, who ditched him six years earlier. When they finally meet up at the aforementioned 3 am wedding party, we learn that she pretty much moved on right after she walked out the door. Why Nick has been stuck in Emotional Limbo since then is anyone’s guess. He tells Brooke, “We love who we love” but six years? You’re a good looking guy, affable, and a talented musician. Get over her!

For a first effort, BEFORE WE GO is not horrible. However, if it wasn’t directed by someone with as much clout as Evans, would it have made a blip on the radar? Probably not. The big question in everyone’s mind is if Evans is trying to emulate Linklater. Even the film’s title suggests he is. As the sun dawns on the Big Apple, and Brooke and Nick head their separate ways, we are left to wonder if we’ll be seeing more of the couple in the future. I hope not. I just wasn’t that into them.

3 thoughts on “Movie Review: Before We Go”