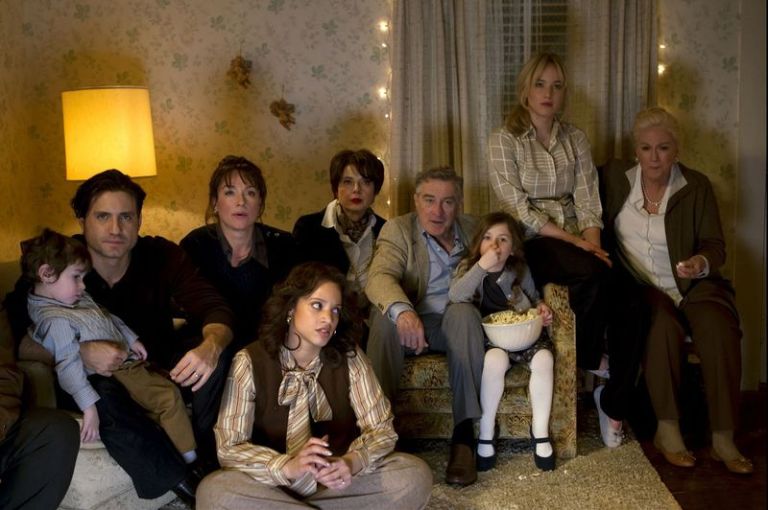 O Mother of Invention, Joy is thy name.

If you’re not a TV shopping channel junkie, you may not have heard of Joy Mangano. Joy is the inventor of the Miracle Mop, Huggable Hangers, Forever Fragrant and more – all household products that you never thought you needed until you saw them being flogged on the small screen, usually by Joy herself. Her story is the subject of a new film by David O. Russell (AMERICAN HUSTLE) and reunites his SILVER LININGS PLAYBOOK cohorts, Jennifer Lawrence, Bradley Cooper and Robert De Niro.

Joy (the film character, not the real person, and there is a difference) is a divorced mother of two who works as an airline customer service rep at one of New York’s international airports. She and the kids share their home with her soap opera-addicted mother, Terry (Virginia Madsen), and sagacious grandmother, Mimi (Diane Ladd). Her ex-husband, Tony (Venezuelan actor, Edgar Ramirez), lives in the basement while trying to make it big as the next Tom Jones. Her already highly dysfunctional household takes a jolt when her estranged father, Rudy (De Niro), moves in after being kicked to the curb by his latest girlfriend. In addition to her job and literally keeping the house in one piece, she also does the accounts at Rudy’s auto body shop – no doubt an unpaid task and one that is resented by her half-sister, Peggy (Elisabeth Rohm), who sees Joy as the privileged daughter.

For Joy, this is not how she imagined her life would be. From an early age, she was a creator and an inventor. Her idea for a glow-in-the-dark flea collar for dogs remained just that… until a pet supplies company came up with the same idea and made millions off of it. Joy promised herself that she’d never let that happen again but then her dreams took a back seat to life and family. That is, until she came up with the idea for a mop that is ultra-absorbent, self-wringing, lightweight and washable.

Coming up with a product idea is one thing but bringing it to the market is another, and JOY (the film) shows all the trials and tribulations that Joy endured along the way. Her fortunes seemed to have finally turned a corner when she met QVC executive, Neil Walker (Cooper), but then the mop flopped in its TV debut. Fortunately for Joy, she decided to take charge of her life and never let her dreams slip away from her ever again.

The story of Joy Mangano is one of the American Dream. Unfortunately, the film does her and her story no great justice. While we should be rooting for Joy to succeed, the film never builds up enough Rocky-type momentum to carry us with her on her rags-to-riches journey. Russell has said in interviews that JOY is not a biopic, which is true enough. The real Joy, for example, doesn’t have a half-sister, resentful or otherwise. Terry, her movie mom, is an amalgamation of a few people, as is merchandising guru Neil. Russell probably created these characters to amp up the craziness that apparently exists in Joy’s real family. Family dysfunction is this director’s trademark as we saw in his last two films, but in this film, while it is often amusing to watch, it doesn’t move the story very far forward. As a result, the part of Joy’s story where she starts manufacturing the mop and trying to sell it herself seems rushed and unfinished. Even worse is the film’s epilogue, which lasts just a few minutes.

Told as a fable and narrated by grandma Mimi, JOY seems like a too-good-to-be-true story. But not only is it true, it’s even better than the fable, though you wouldn’t know it from watching this film. For the most part, JOY is a bit of a mess, which is a shame considering the cast and the director. Sure, there are some good scenes, particularly those where her family is being their crazy best, or where Joy enters her mother’s soap operas in her dreams. (Soap lovers will no doubt recognise daytime TV icons, Susan (“Erica Kane”) Lucci and Maurice (“Sonny Corinthos, Jr.”) Bedard). The problem seems to be that Russell couldn’t decide whether his film should be a comedy or a drama. Certainly, a film can be both but JOY starts off as one and changes into the other. That makes JOY not as much of a contender as it could have been.