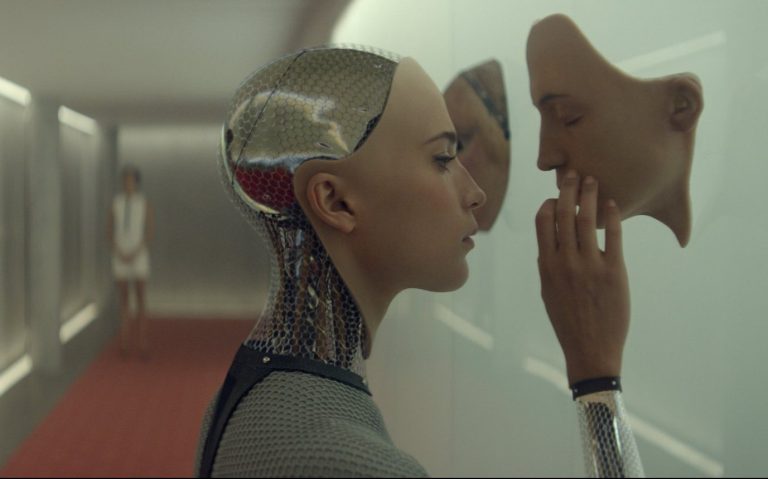 If you’re the type who downloads free apps at the drop of a hat or accepts software upgrades without reading the terms and conditions first (and who among us doesn’t fall into one or both of these categories), you may want to watch EX MACHINA before you blindly click on the Accept button next time.

Caleb Smith (Domhnall Gleeson, STAR WARS) works as a programmer at Bluebook, a Google-like company that has a stranglehold on the Internet search business. One day he wins a company competition to spend a week at the secluded Alaskan estate of Nathan Bateman (Oscar Isaac, STAR WARS), the company’s reclusive founder and CEO. Needless to say, Caleb is more than a bit chuffed, a feeling that is only surpassed when he’s sitting in the corporate helicopter as it flies him over some spectacular landscape which, he is told, all belongs to the boss. Once settled in at his temporary digs, he meets Nathan, who asks him to sign a non-disclosure agreement. Caleb learns that he’s not been brought all that way just to sit back and crack open a few bottles of beer with Nathan. He’s there to work. Nathan, we all learn, has created an android and Caleb’s job during the week is to do the Turing Test on it. (If you missed seeing THE IMITATION GAME last year, the Turing Test assesses whether a computer has the ability to exhibit intelligent behavior equivalent to, or indistinguishable from, that of a human.) Caleb is up for the challenge and he’s taken to a room where he sees his test subject on the other side of a glass wall. Ava (Academy Award® winner Alicia Vikander, THE DANISH GIRL) is a sight to behold. Her torso and limbs are translucent, revealing all the circuitry inside. Only her face is flesh-like. Over the next seven days as Caleb and Ava interact with each other, Caleb begins to realise that everything and everyone at Nathan’s remote hideaway is not all that it appears to be.

EX MACHINA is one thought-provoking and intense film! It’s a bit of a cross between Frankenstein and Spike Jonze’s film HER with an overlay of Joseph Conrad’s Heart of Darkness. Isaac’s performance is even reminiscent of Marlon Brando’s Kurtz in APOCALYPSE NOW. As Caleb, Nathan and Ava all try to get into each other’s heads, we’re left to guess everyone’s motivations until it all becomes clear in the film’s closing scenes. (I was sure the film was going to end differently than how it did.)

The film is the directorial debut of Alex Garland, who also wrote the screenplay. Garland is no stranger to the sci-fi genre as he also wrote the script for the post-apocalyptic thriller 28 DAYS LATER, a film that has been widely credited with reviving the zombie genre. His first novel, The Beach was made into a film starring Leonardo DiCaprio. All three actors shine here but none more so than Vikander. Before she started acting she was a professional dancer and her training is evident here in the way Ava walks and turns her body. She’s robotic and seductive at the same time.

At the recent Academy Awards®, the film took home the Oscar® for Best Visual Effects, upsetting heavy favourites THE REVENANT and STAR WARS: THE FORCE AWAKENS. The award was well deserved as Ava was both creative genius and aesthetic beauty.

The story of EX MACHINA is sure to stick with you for some time. The big question, though, is if it will make you think twice the next time you want to download that new free app.