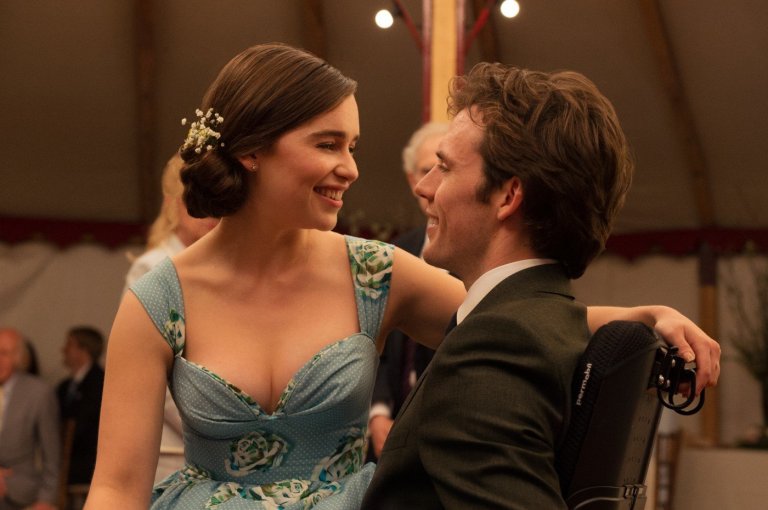 I’ve got nothing against tear-jerker movies that deal with young people dying. I enjoyed (if that’s the right word to use here) THE FAULT IN OUR STARS and I thought that ME AND EARL AND THE DYING GIRL was an excellent film about real young people with real hopes and fears. ME BEFORE YOU is something else though. This one is as manipulative and disingenuous as they come.

Will Traynor (Sam Claflin, THE HUNGER GAMES series) is a high-flying, high-living, financial guy in London. He appears to have it all — good looks, great hair, a well-paying job, a gorgeous girlfriend and a swanky flat done up in minimalist grey tones. All that abruptly comes to an end when he’s hit by a motorcycle while crossing the road. (Let this be a lesson to all of you who are glued to your mobile phones while walking.) The accident leaves Will a quadriplegic, and a bitter one at that.

Louisa “Lou” Clark (Emilia Clarke, TV’s GAME OF THRONES; TERMINATOR: GENISYS) is a young, sales clerk in a provincial town somewhere in southern England. Her customers love her because she knows what they want and she gives it to them. Unfortunately for her, though, those wants often run contradictory to what her boss wants, the result being that she gets fired. Now, unemployed, she’s got to find a new job. The only problem is that she’s quite the free spirit, both in mind and in dress, and finding the right job for Lou is a bit like trying to fit a square peg into a round hole. But, as luck would have it, Will’s mother is looking for someone to be a carer for her son during the day and experience doesn’t seem to be necessary. Yes, Will is from the same town as Lou but he grew up on the other side of the tracks, so to speak. His family owns the castle that dominates the town’s skyline. Though they now live in a relatively modest manor adjacent to the castle grounds, they are richer than rich.

Despite being clearly unqualified, Lou gets the job but it’s not easy for her. Will doesn’t like her cheerful demeanour, he doesn’t want her around, and he would prefer to be left alone for the next six months because that’s all the time he’s given himself until he goes off to a clinic in Switzerland where they facilitate assisted suicide. Lou, though, is forever optimistic and she thinks she can change his mind. So, she works on coming up with a bucket list of things she’d like to do with Will that will hopefully show him that life really is worth living.

If you think this story sounds like a cross between Beauty and the Beast, IT’S A WONDERFUL LIFE, PRETTY WOMAN and any film where someone dies far too young, you’re right. Will comes across as an elitist snob who looks down upon Lou with her kooky dress sense and working class values. We might try to feel sorry for him given all he’s lost but I’m sure there are more than a few quadriplegics out there who have much less than he has in terms of comfort and support (you should see how his new, wheelchair-friendly, home is kitted out) and who still want to live.

ME BEFORE YOU is adapted from the best-selling novel by Jojo Moyes, who also wrote the screenplay. Maybe that was part of the problem with this film. (Interestingly, Michael H. Weber and Scott Neustadter, the guys who wrote the screenplays for THE SPECTACULAR NOW and THE FAULT IN OUR STARS, had originally been hired to do this film too. It’s too bad they didn’t.) The dialogue, which might work on paper, sounds completely ridiculous when heard aloud. There is a brief conversation between Will and Lou that takes place at the racetrack that is absolutely cringe-worthy in its arrogance. (It shouldn’t matter that he’s in a wheelchair. He needed a good slap across the face at that point.) The director, Thea Sharrock, is also at fault. I can appreciate that Lou is supposed to be unique but Emilia Clarke’s cloying portrayal of her is way beyond over the top. She needed to dial it back to the single digits. Even more annoying were the two, very active, caterpillars nesting where Clarke’s eyebrows should have been, and the toothy smile that went from dimple to dimple. I predict there will be many videos made that will spoof the look.

For sure, many people (women, mostly) will be reaching for their tissues with each treacle-laden song that is meant to evoke tears. By the time Ed Sheeran’s Photograph comes on, anyone still sniffling will be reduced to a blubbering mess. For the cold-hearted cynics among us, though, we’ll just be rolling our eyes for the umpteenth time waiting for the closing credits to finally roll.

9 thoughts on “Movie Review: Me Before You ”