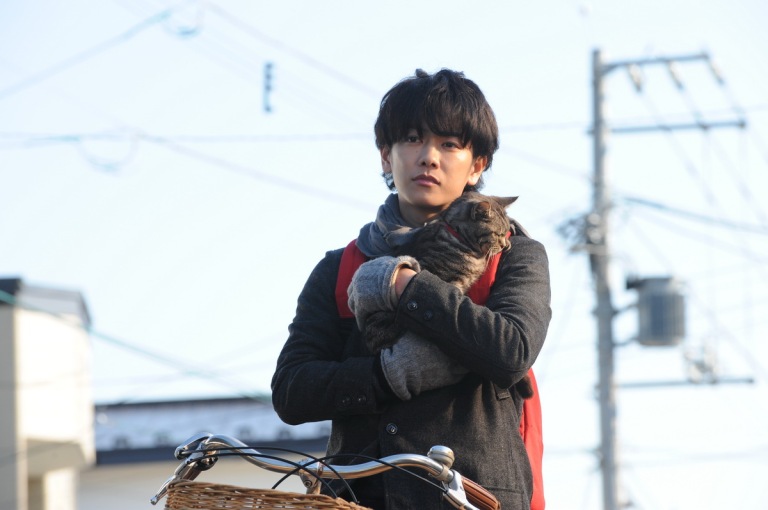 Hot on the heels of two other tear-jerkers (FATHERS AND DAUGHTERS and ME BEFORE YOU) that have graced our cinema screens in the past few weeks, along comes the equally saccharine, IF CATS DISAPPEARED FROM THE WORLD. Based on the 2012 novel of the same name, it is a Faustian story of a young postman from the northern Japanese city of Hakodate who finds out that he has an inoperable brain tumour.

The unnamed postman (Takeru Satoh – 佐藤健) is a guy of simple ambition, which is a polite way of saying that he’s a super underachiever (though he has terrific dress sense). Since graduating high school about a dozen years earlier, he’s been delivering mail on his rickety bicycle in this sleepy seaside town. He shares his tiny studio apartment in an old house with his grey tabby named… well, let’s leave it that the cat shares its name with a rather inelegant vegetable. His passion is watching classic movies and for that he’s got his old school chum, Tsutaya, who runs a DVD shop. Outside of Tsutaya, whose name the postman can’t seem to get right even after all these years, he doesn’t seem to have much else going on in his life. He’s estranged from his widowed father and he doesn’t have anything to do with his ex-girlfriend – his first love, no less – even though she, too, is also a slacker and shares his love of old films. She runs the box office at, presumably, the area’s only cinema, a job she’s had since high school.

The postman’s carefree existence literally comes to a crashing end when he learns from the doctor, who may possibly win the award for having the worst bedside manner in all of Hokkaido, that he has just a day left to live. The postman heads home to his humble surroundings and his cat only to discover that he has a guest waiting there for him – it’s him, or it’s the Devil who looks just like him. The Devil tells the postman that he can give him another 24 hours of life if he agrees to rid the world of one thing of his choice. The postman is tricked into choosing mobile phones and the ubiquitous devices suddenly melt away into oblivion. Simple enough but what the postman doesn’t count on is that nothing exists in isolation. The loss of one thing leads to the loss of another. The postman, though, is undeterred. He wants to live. So, when the day ends, he makes another pact for another 24 hours. With each item disappearing from the world, the postman is forced to confront his past and adjust to his new reality… until the day comes when the Devil wants cats to disappear.

I’m not a fan of contemporary Japanese cinema and for very good reason. It seems that far too many stories involve situations and dialogue that bear no relation to reality. Of course, having a conversation with the Devil isn’t something we do every day (at least I don’t) and I can accept literary license. If it were me in this situation though, I’d say to the Devil, “Just 24 hours and then we have to go through this all over again? Thanks but no thanks.” I’m all for doing away with mobile phones if it means having no Pokémon Go, but after going through what the postman goes through on the first day I would definitely not repeat it even if it meant living to see another day. So why, then, are women crying their eyes out with this story? Why are they finding this film so heartbreaking? If you don’t believe me, watch the first 30 seconds of this video, which is taken from the film’s Japanese website:

The same thing happened when I watched the film. The woman seated next to me was bawling by the time the closing credits rolled. I could also see other women seated across the aisle from me dabbing their eyes with tissue throughout this painful experience.

The other problem I have with contemporary Japanese cinema is that they star 30-year-old actors who look like they should still be in high school and the stories often put them there. This film is the same. In flashback scenes, we learn how the three main characters meet. To make these actors look like 16-year-olds, which isn’t that hard to do to begin with, the makeup artist gives them each a bad haircut. Their clothes are almost the same, though slightly oversized and perhaps a bit less trendy that what they’re wearing as adults.

I can think of two nice things to say about the film though. The first is the cats (plural). It’s not easy getting these animals to do what you want them to do at the best of times so kudos to director Akira Nagai (永井聡) for making sure they look and behave as adorably as possible. The second is Mieko Harada (原田美枝子), who plays the postman’s mother in flashbacks. Harada is best known for her portrayal of Lady Kaede in Akira Kurosawa’s 1985 masterpiece, RAN. Now that is a film worth watching and her performance will blow you away!

Sadly, IF CATS DISAPPEARED FROM THE WORLD is the cinematic equivalent of cotton candy – it’s sweet for the first few bites and then it just gets nauseating, and it’s mostly full of air. If you’re looking to have a good cry and you’ve already seen – and enjoyed – the other two films I mentioned above, then go see this one. Otherwise, don’t waste your time. Go hug a cat instead.

2 thoughts on “Movie Review: If Cats Disappeared From the World (世界から猫が消えたなら) (當這地球沒有貓)”