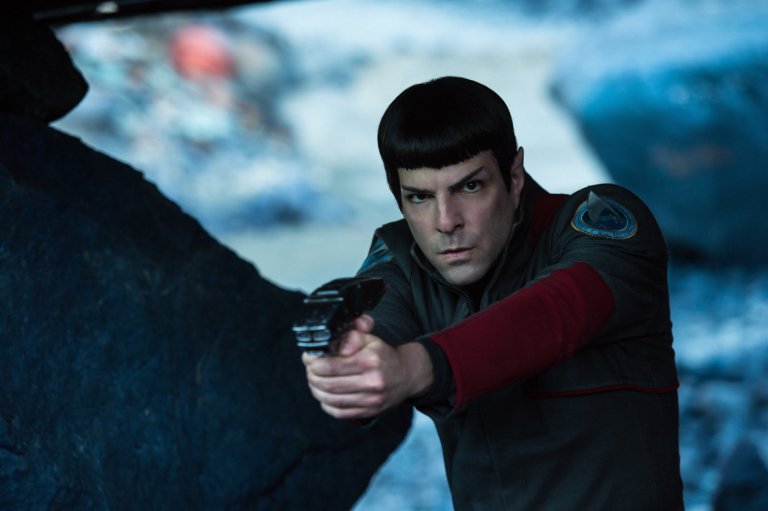 Before we go warping off to the year 2263, let’s go back in time almost 50 years to the summer of 1967. STAR TREK (or ST: THE ORIGINAL SERIES, as it’s now called) was halfway through its second season on TV and a rumour had spread that NBC was considering cancelling the show. One little boy in Toronto wrote to the network’s executives in New York informing them that STAR TREK is the best show on TV and they would be wrong to cancel it. That letter from the “8-3/4 year old” saved the series and it went on for the third and final season. It also spawned a multi-billion dollar industry that continues today. In case you didn’t already figure it out, I was that little boy.

I am not a fan of the rebooted film franchise that began in 2009 with James T. Kirk and his crew battling a disgruntled Romulan for some reason that I never quite wrapped my head around. (An alternate universe? Really?) Although the first two films were not bad entertainment, and certainly much better than the odd-numbered STAR TREK films that came out in the 1980s, I felt that this new franchise seemed more like a 23rd century Indiana Jones, which is not surprising considering who is producing it. J.J. Abrams (STAR WARS: THE FORCE AWAKENS) has called director Steven Spielberg his hero. While both films were big on action, crashed vehicles (an Abrams signature) and interesting alien life forms, they lacked series creator Gene Roddenberry’s vision. Oh sure, Kirk (Chris Pine, JACK RYAN: SHADOW RECRUIT) was still sleeping with anything and everything of the female gender, Spock (Zachary Quinto, TV’s HEROES) was still logical (although he now had a girlfriend in none other than Lt. Uhura), McCoy (Karl Urban, THE LORD OF THE RINGS trilogy) was still moaning about being asked to do non-medical things and Scotty (Simon Pegg, MAN UP) was still warning of the consequences of making the USS Enterprise do the things that Kirk wanted the starship do. All the big brush strokes were there. The small ones – the stories about the environment, discrimination, the generation gap, unbridled power and other contemporary societal issues set in a futuristic context – basically what made ST: THE ORIGINAL SERIES so special – were absent.

Needless to say, a smile came to my face when I heard that the Enterprise crew were going to embark on their five-year mission with STAR TREK BEYOND. Finally, I thought, they’re going to explore strange new worlds, to seek out new life and new civilizations, to boldly go where no one has gone before. This is a film I’m going to like.

And, for the most part, STAR TREK BEYOND delivers on that promise. In this film, the crew are into their third year in deep space. (Did nothing happen during those first two years?) Kirk, though, is bored. He wants to take a desk job back at Starbase Yorktown and leave the Enterprise in Spock’s capable hands. Spock, meanwhile, is having his own mid-mission crisis. Having seen his planet destroyed by Nero, the aforementioned Romulan, his mind is on leaving Starfleet and going off to make little Spocks and Spockettes for New Vulcan, as it is called. Uhura (Zoë Saldana, GUARDIANS OF THE GALAXY), though, is not in those plans. All their thoughts are put on hold when they encounter Kalara (Lydia Wilson), who lures them to the Class M planet, Altamid, to ostensibly rescue her ship and crew. It turns out, though, that it was a trap set by the nefarious Krall (Idris Elba, THE JUNGLE BOOK), who has a bone to pick with Starfleet. He uses his massive swarm of ships to destroy the Enterprise, forcing the crew down to the planet where they become his prisoners. Of course, Kirk & Co. don’t go down without a good fight and this time they’re joined by Jaylah (Algerian actress, Sofia Boutella), a zebra-striped alien who survived an earlier attack by Krall and has been hiding out on the planet inside the wreck of the USS Franklin, which vanished about a hundred years earlier.

Although there are plenty of explosions, phaser fire and fight scenes, this film finally offers up some real character development. There is some great dialogue between Spock and McCoy, and 966 days in space seem to have matured Kirk. We also discover that in this alternate universe Sulu (John Cho, the HAROLD & KUMAR series) is not only gay, he’s a gay dad. Now, had the original Sulu, George Takei (who is gay and is a huge gay rights advocate), not publicly criticised the screenwriters’ decision to turn his beloved alter ego in a gay character, I wouldn’t have figured it out. For all we know, the Asian man looking after Sulu’s daughter could be his brother. But in 2263, when two men hug each other, they must be gay.

All in all, this is an entertaining summertime film and well worth the extra cash to see it in 3D. It’s also worth seeing because it’s the final film starring Leonard Nimoy, the original Mr. Spock, who died during post-production. Although his passing is sad, he did exactly what his character always wished for others – he lived long and prospered. Nimoy left us with a lot of good memories and he gave the world something that is thousands of years old. If you didn’t already know, the Vulcan salute is a Jewish sign. (Don’t believe me? Look it up.) Sadly, it’s also the final film starring Anton Yelchin, the new Mr. Chekov, who died in a freak accident at his home. May his memory live long.