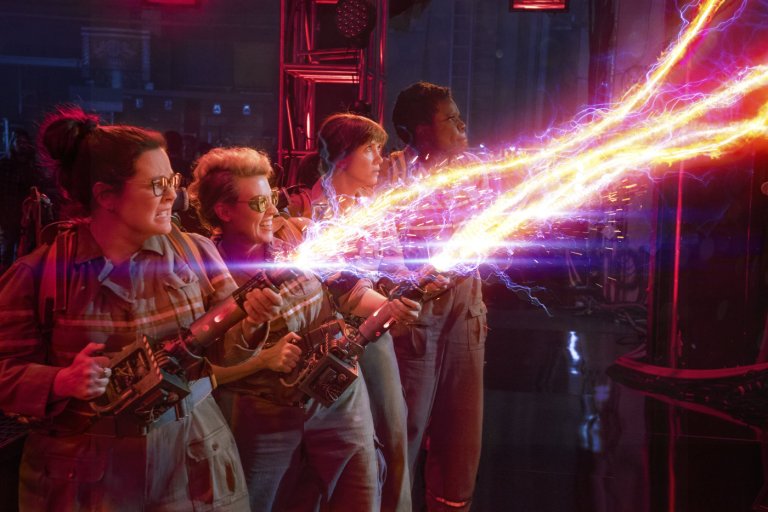 Ever since the news broke a few years ago that a female-led remake of the 1984 comedy classic, GHOSTBUSTERS, was in the works, the Internet has been awash with posts from people who hated the idea. The audacity of it all, they claim! After all, the original story, starring Bill Murray (ST. VINCENT), Dan Ackroyd, Harold Ramis and Ernie Hudson as the eponymous spirit catchers, holds a hallowed place in our collective hearts. How could women possibly match up? The hostility was ratcheted up to a whole new level when the first trailer was released in March of this year. It has since become YouTube’s most disliked video with close to a million thumbs down (as of July 26, 2016). But the vile armchair critics weren’t done. When the film premiered a few weeks ago, they took to the cybersphere again, this time dissing actress Leslie Jones who attended the event wearing an impeccably tailored red dress. (Yes, she’s big, brash and black. Get over it, you weenies!)

But here’s the thing: How many of these people were actually around in 1984 and when was the last time they saw they original film?

I wouldn’t be able to ask the second part of that question unless I watched the film again, which I did the other night. (I hadn’t watched it since it came out 32 years ago.) Guess what? It wasn’t as good as I remembered it to be! In the film, Murray delivers his usual deadpan, irreverent shtick as parapsychologist Peter Venkman. The other actors are often left gape-mouthed as they try to both digest his ad libbed riff and come up with something equally funny. More often than not, they can’t and they stumble. Aykroyd, meanwhile, often falls back into his “TV pitchman” persona, a character he honed in his years as a Not Ready For Prime Time player on TV’s SATURDAY NIGHT LIVE. He was funny selling the Super Bass-o-matic there; not so funny here. But we all love that movie because we love the actors, we love Ray Parker Jr.’s song, we love the Stay Puft Marshmallow Man and we love the logo.

In case you haven’t heard, GHOSTBUSTERS (2016) is neither a sequel nor a reboot. It’s a reimagining. Same premise; different story. Get it? Instead of being a male-led story (Sigourney Weaver and Annie Potts were the only two women acting in the original), the new GHOSTBUSTERS only has a couple of male characters in the cast. In this version, Erin Gilbert (SNL alumna Kristen Wiig) is a physics professor at a prestigious NY university. Her quiet life and plans for tenure are thrown into disarray when her childhood friend, Abby Yates (Melissa McCarthy, SPY; ST. VINCENT), puts a book about the paranormal that they co-wrote years ago up for sale on Amazon. Abby is holed up in the basement of a spurious institute of higher learning also in NY along with her colleague, engineer Jillian Holtzmann (Kate McKinnon, also of SNL). The two women are ghost hunters, with Holtzmann inventing crazy devices à la Doc Brown from BACK TO THE FUTURE that they use to find the spirits and neutralise them. The quartet is rounded out by transit worker and history buff, Patty Tolan (Leslie Jones, also of SNL fame), who asserts herself on the group after she sees an apparition on the subway tracks.

Much like the original story, when a ghost makes an appearance, not at the New York Public Library but this time at an old Manhattan mansion, the ladies are called in to investigate. They quickly realise that they are outclassed by the apparition and they have to go back and get the big guns. The attention the women receive on the Internet (most of it negative, in an obvious middle finger gesture to the haters) reaches their institute’s dean, and Abby and Jillian lose both their workspace and their funding. Again, like the original, they’re undaunted and they quickly find new digs. (They’re shown the same unused firehouse that was featured in the original but they can’t afford it. Instead they move upstairs from a Chinese restaurant.) They also hire a receptionist and, again in a 180-degree turn from the original, the ladies hire a man – and a hunky, dumb blond one at that. Kevin (Chris Hemsworth, THOR) is as dense as they come but Erin is smitten by their new piece of eye candy. (Unfortunately, this plot line goes nowhere.)

As in the original, more ghosts appear and the women employ more sophisticated technology to nab them. However, unlike the original, the mayor (played by Andy Garcia) is less than supportive of their efforts, publicly dismissing the group as sad, lonely women, no doubt another middle finger gesture to the haters. It culminates in a massive hole opening in the nexus where fury rains down on the city.

To its credit, the script is peppered with pop culture references that weren’t around in 1984, such as Reddit and Oprah. The special effects aren’t anything special but perhaps they don’t need to be. You’re not going to see this film because of the CGI. Towards the end of the film, director Paul Feig (SPY) sets the stage for what appears to be a Michael Jackson-inspired dance number but that, too, goes nowhere and what we’re left with doesn’t make much sense. (All is revealed, however, in the closing credits.)

I’ll admit that GHOSTBUSTERS (2016) is not a great movie but it’s at least as good as its progenitor. It’s fun, summertime entertainment and it features many of the original cast including Murray, Ackroyd, Hudson, Weaver and Potts in cameo roles. (Sadly, Harold Ramis passed away in 2014 and Rick Moranis declined to appear in the film.)

And guess what? It shows that women can rock too!