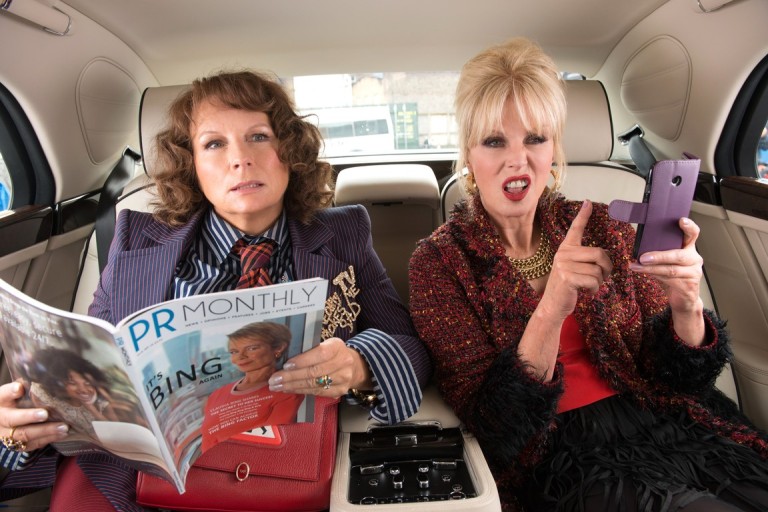 Britain’s most famous reprobates are back! No, I’m not referring to a certain prince and his ex-wife. I mean PR maven Edina Monsoon (Jennifer Saunders) and fashion editor Patsy Stone (Joanna Lumley). It’s been 24 years since we first met them but only four years since their last special aired on TV. Since then, they’ve gotten a bit older (although, at 70, Lumley looks, dare I say, absolutely fabulous) but they still know how to party… and, boy, do they party in this long-awaited big screen adaptation of the hard-drinking, heavy-smoking gal pals from London’s West End.

As ABSOLUTELY FABULOUS: THE MOVIE opens, the ladies literally roll out of Eddie’s (or, mostly likely, someone else’s) Bentley, after a full night of debauchery. At home having breakfast is the ever-suffering Saffy (Julia Sawalha) along with Saffy’s now 13-year-old mixed race daughter, Lola. Coming down the stairs on a chair lift is Edina’s mother (90-year-old! June Whitfield). Edina’s PA, Bubble (Jane Horrocks), is waiting there too. Not much has changed at the Monsoons, it seems. Except it has. Eddie has maxed out all her credit cards, her gay ex-husband, Marshall, has decided that he can’t keep supporting her in the style to which she’s become accustomed, and much worse, there’s not a bottle of Bolly to be found in her huge champagne fridge. What’s a girl to do?

Fortunately, Patsy is putting together an event where anyone who is anyone in the fashion industry will attend. She learns that Kate Moss is looking for a new PR firm to represent her and Eddie goes to the event hoping to land Kate as a new client. Unfortunately, in Eddie’s zeal, she inadvertently knocks Kate over the balcony and into the Thames where she goes missing. The world thinks that Edina has killed Kate and, in this new age of Facebook, Twitter and instant news, Edina becomes an overnight pariah. With nothing left for her in London except, perhaps, jail time, she and Patsy hightail it to Cannes where, Eddie says, everyone’s a criminal, intending to spend the remainder of their days sponging off the rich there.

I think I’ve seen all the episodes of the original TV series and I have always thought that Saunders was a better physical comedian than she was a comedy writer. That feeling still holds true with this film, which she also penned. The laughs are there but they are very few and far between. There is one scene where Eddie is speaking with a book editor hoping to get her memoire published. He looks at the manuscript and sees “blah blah blah blah” typed across many of the pages (sorry for the spoiler). I get the impression that the screenplay for this film looked the same. She had a rough idea of how a scene would go, and she and Lumley would just riff it a few times until they got it to the point where she was satisfied. That formula doesn’t make for a great film.

To her credit, Saunders did manage to corral a huge number of familiar faces to appear in the film including Lulu, Emma Bunton, Stella McCartney, Joan Collins, Barry Humphries, Jon Hamm, Gwendoline Christie (TV’s GAME OF THRONES), Graham Norton, Jerry Hall, Jean-Paul Gaultier and, of course, Kate Moss. Rebel Wilson (PITCH PERFECT), Chris Colfer (TV’s GLEE), Dawn French and Robert Webb (TV’s PEEP SHOW) all have small character roles in the film too. As the closing credits rolled up the screen, I noticed a couple dozen people had appeared as themselves. If you’re a fashionista, you will recognise the names. I certainly didn’t.

Interestingly, there has been very little promotion for the film done here in Hong Kong. Even the cinema where I saw it didn’t have one poster out. I’m guessing the distributor knows it’s not a very good film.