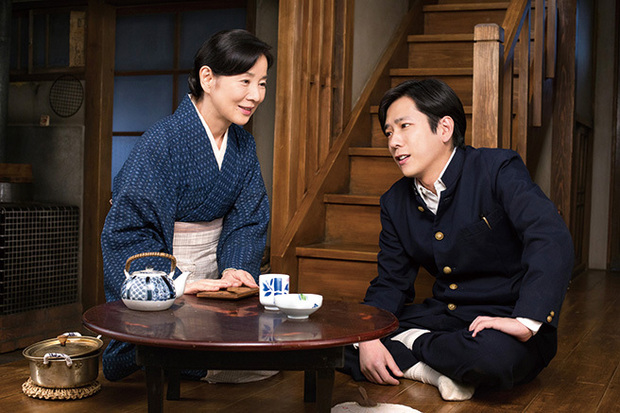 It’s no secret that I am not a fan of contemporary Japanese cinema. Too often, these films are sappy love stories involving high schoolers who are being played by puppy-faced, 30-year-old actors and actresses. Yes, I know this genre is very popular with Asia’s young women and their obsequious boyfriends, but it’s definitely not my thing. (Read my review of IF CATS DISAPPEARED FROM THE WORLD and you’ll understand my disdain.)

Fortunately (for me, I guess), NAGASAKI: MEMORIES OF MY SON is not your typical Japanese sappy love story. Set in Nagasaki three years after the atomic bomb was dropped there, the film tells the story of Nobuko Fukuhara (played by Japan’s most celebrated post-war actress, Sayuri Yoshinaga/吉永小百合), a lonely midwife whose son, Koji (boyband idol and actor, Kazunari Ninomiya/二宮和也), was incinerated in the blast. Although Koji was the light of her life, the frail Fukuhara has resolved to accept her circumstance as best she can, as has everyone else in her hillside neighbourhood. Fairing less well is Koji’s fiancée, Machiko (2014 Silver Bear winner, Haru Kuroki/黒木華), who just can’t seem to move on with her life. She’s extremely devoted to the woman who was supposed to be her mother-in-law had the bomb not taken her love away. Fukuhara doesn’t mind the attention she gets from the young woman so the two of them maintain a co-dependent relationship. That all changes, though, when the ghost of Koji comes back to visit his mother. Fukuhara knows Koji is not real but that doesn’t matter to her. She’s happy to have his company and to reminisce with him about happier times. Together they find closure and can move forward.

If you think this story sounds a bit like the American film, GHOST, you’re not alone, but it works probably due to gravity of how Koji died (he was just a happy-go-lucky medical student, not an investment banker), and to the earnestness of the performances all around. Yes, the story is melodramatic but when it goes for the heartstrings the way GHOST does, it quickly lightens up (thanks to Ninomiya’s chipper performance).

Most of the action takes place in Fukuhara’s very modest, three-room house. It is staged like it was originally a play that had been adapted to the screen but that’s not the case. (Given the film’s success at the box office, it wouldn’t surprise me if it would be adapted for the stage now.) Interestingly, Fukuhara is a Christian, and a devout one at that. Perhaps 85-year-old writer-director Yoji Yamada (山田洋次), who is perhaps best known for his series of “Tora-san” films, wanted to show Western, and particularly American, audiences that the people they saw as their enemy were just like them. They prayed to the same higher being, they loved the same music, and they had the same hopes and aspirations. Such a message is all the more poignant right now when political leaders around the world are demonizing outsiders.

Though NAGASAKI: MEMORIES OF MY SON is somewhat old-fashioned in both tone and structure, it is well done. The music, by Ryuichi Sakamoto (坂本龍一), is wonderfully poetic and emotive too. The film has been selected as the Japanese entry for the Best Foreign Language Film at the 89th Academy Awards. I doubt it will win but that doesn’t mean you shouldn’t see it.

2 thoughts on “Movie Review: Nagasaki: Memories of My Son (母と暮せば)”