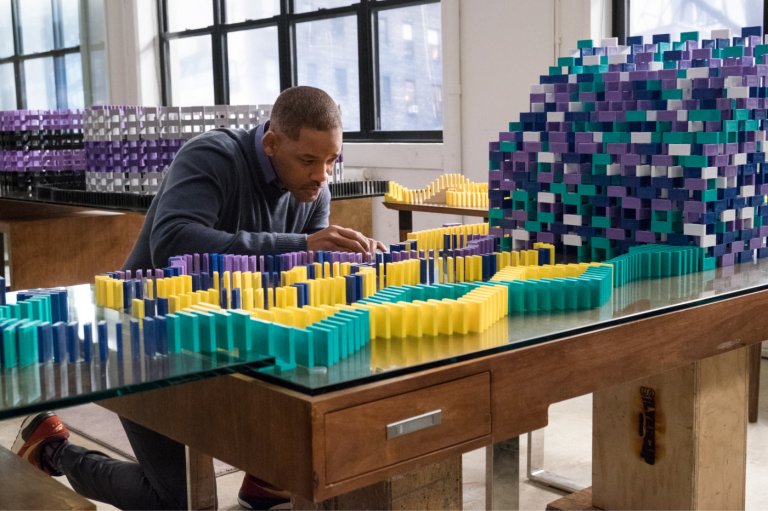 Hollywood has been doling out sappy Christmas movies for more than 70 years. But while millions of people would agree that IT’S A WONDERFUL LIFE (1946) and MIRACLE ON 34TH STREET (1947) earned every tear that was ever shed on their behalf, COLLATERAL BEAUTY earns absolutely nothing except a few groans.

Howard Inlet (Will Smith, CONCUSSION) is the CEO and creative force behind a boutique ad agency in Manhattan. His inventive mojo and gift of the gab, however, disappears when his 6-year-old daughter suddenly dies from unnamed causes. Three years after that tragic event, Howard is still completely shut down, spending his days in his office constructing elaborate and colourful domino mazes, and his nights locked away at home writing angry letters to “Love”, “Time” and “Death” – abstractions that he believes motivates everyone either positively or negatively. Because Howard just can’t get past feeling cheated by these three concepts, both he and agency are suffering for it.

Faced with the prospect of losing everything they’ve built up over the years, his business partners and best friends, Whit (Edward Norton, FIGHT CLUB), Claire (Kate Winslet, THE DRESSMAKER; STEVE JOBS) and Simon (Michael Peña, THE MARTIAN), decide it’s time to take drastic action. They’ve been approached by a competing firm to buy them out at a very handsome premium but Howard owns the majority of the company’s shares. (Why anyone would pay more than what the company is worth when Howard is in such a state is just one of the story’s many improbable plot lines.) The unholy trinity convince themselves that by staging an intervention of sorts, they can get Howard to see that he’s not fit to continue running the company and he’ll relinquish control to them. Being the warm and caring friends that they are, they concoct a plan to hire three actors to pose as the embodiments of the three abstract concepts and engage Howard in discussions that will hopefully get him to change his ways. Yes, it would seem that COLLATERAL BEAUTY is a modern and very callous riff on Dickens’ “A Christmas Carol”.

But it gets worse. It just so happens that Howard’s so-called friends have inner demons of their own that they’re not dealing with. Fortunately for them, the actors playing “Love” (Keira Knightley, BEGIN AGAIN; THE IMITATION GAME), “Time” (R&B singer, Jacob Latimore) and “Death” (Helen Mirren, TRUMBO) are also pop-psychology geniuses and they are able to use their new roles to heal not just Howard but all of them.

The treacly icing on the cake comes when grief-support group leader, Madeleine (Naomie Harris, SPECTRE), tells Howard to look for something called “collateral beauty” in every tragic situation. What’s “collateral beauty”, you ask? Even after explaining it to him (and us), I still didn’t get it and I had to read the Chinese subtitles on the screen to try to understand the concept better. In Chinese, it’s “美麗的安排”, or “beautiful arrangement”, which tells me that the film’s translator didn’t get it either. The French translator understood it better though. In that language it’s “beauté cachée”, or “hidden beauty”. What Madeleine and screenwriter Allan Loeb (WALL STREET: MONEY NEVER SLEEPS) mean is that we’re supposed to look for the beauty that’s hidden behind every tragic situation. What?! I can’t see how telling someone to look for the beauty in their lives is going to help them deal with their grief. (Try it sometime and let me know how it goes, though I take no responsibility for any broken bones or broken relationships that may ensue.)

COLLATERAL BEAUTY is a vile mess of ridiculous conversations and questionable motivations that someone should have axed early on in the production process. Judging by their dull performances, the actors all must have been thinking the same thing too. Mirren is the best of the lot but even she couldn’t make her lines any less cringe-inducing than what they were. Sappy Christmas movies, even with their tears, are supposed to be uplifting. This one’s a complete downer that will make you want to take a shower afterward.