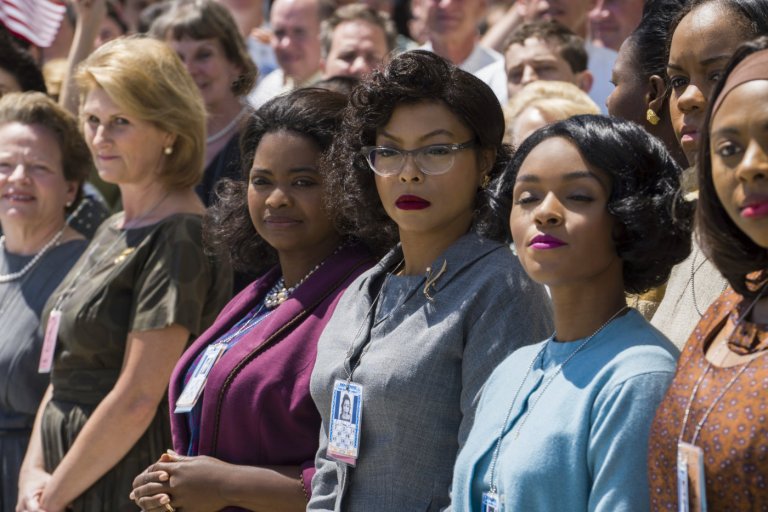 In this age of the Internet and 24-hour news, it’s amazing that there are still untold stories out there. The film, HIDDEN FIGURES, is about one of them. It tells the amazing-but-true story of a group of mathematicians – all African-American women – who were instrumental in helping NASA put a man up in space.

Katherine Goble Johnson (Taraji P. Henson, TV’s EMPIRE), Dorothy Vaughan (Octavia Spencer, THE HELP) and Mary Jackson (Janelle Monáe, MOONLIGHT) were all employed as computers at the government agency at a time when the word “computer” meant a person and not a thing. Working in the racially segregated West Area Computers division, their job was to check the multitudes of mathematical equations that the all-white, all-male engineers were developing in other buildings at the Langley Research Center in Hampton, Virginia. This was unchartered territory for NASA. With the USSR launching the Sputnik 1 satellite in 1957 and, less than four years later, putting the first human, Yuri Gagarin, in orbit, the US space agency was under heavy pressure to catch up. As there weren’t enough male mathematicians, let alone white male mathematicians, around to meet the agency’s voracious demand, it began hiring American-American women to fulfill the need. (In fact, the agency, which was called NACA (National Advisory Committee for Aeronautics) prior to 1958, began hiring African-American female mathematicians in the early 1940s.)

These three women were all extremely capable and, although racism was as institutionalised in NASA as it was an every other organisation in the US back then, they excelled in their field and at the same time pushed the boundaries for what an African-American woman could do. Vaughan, who was already the group’s supervisor in the 1960s (in the film she’s seen still trying to break the glass ceiling), quickly saw her and her team’s future when the organisation purchased its first IBM mainframe computer. She and the girls taught themselves FORTRAN so that they would become indispensable to NASA as programmers. Goble Johnson was already assigned to the team calculating flight trajectories for the country’s first manned launch that would put John Glenn in orbit. Not content, however, with just being a human adding machine, she petitioned to be included in the high-level editorial meetings and to publish her scientific work under her own name. (Her first report, entitled “Determination of Azimuth Angle at Burnout for Placing a Satellite over a Selected Earth Position”, was published in September 1960.) Jackson, meanwhile, was assigned to the team that examined supersonic wind speeds. Though not officially an engineer, she held her own against her white male colleagues. She eventually successfully sued the city of Hampton to allow her to attend night school at the all-white Hampton High School and, in 1958, she became NASA’s first black female engineer. (Again, the film plays fast and loose with the timeline.) While all this was going on, the women were married and raising families too.

HIDDEN FIGURES is an absolutely wonderful film that will leave a healthy lump in your throat by the time the final credits run. This was America at its finest, when everyone put aside their personal beliefs, fears and biases for the common good. As the film shows, it wasn’t easy for the women or for the white male establishment. There’s a poignant scene towards the end of the film where Dorothy runs into her white boss, Vivian Mitchell (Kirsten Dunst, the SPIDER-MAN trilogy), in the now-integrated women’s toilet. Vivian knows the world is changing and she thinks she’s changing with it but Dorothy knows better. Her reply to Vivian is perfect. Though Vivian doesn’t realise it, Dorothy’s fight for equality will also benefit her.

It’s hard to say which of the three actresses was the best – they were all magnificent. Only Spencer was nominated for an Oscar® (Best Supporting Actress) though. If I had to choose one, I would have chosen Henson as she had a largest role in the film. Monáe, who is known more for being an R&B singer than an actress, was truly a delight to watch. She’s also in the film MOONLIGHT, which is coming here in a few weeks’ time. I’ve already seen the film and she’s excellent there too.

My only reservations with HIDDEN FIGURES are the timeline issue and that nary a slide rule was to be seen, but these are both minor beefs. Director Theodore Melfi (ST. VINCENT) did proper justice to this amazing story about three extraordinary women who fearlessly tore down every wall that was put up in their way. If you want to know their real story though, read the book by Margot Lee Shetterly. It is even more incredible than the film.