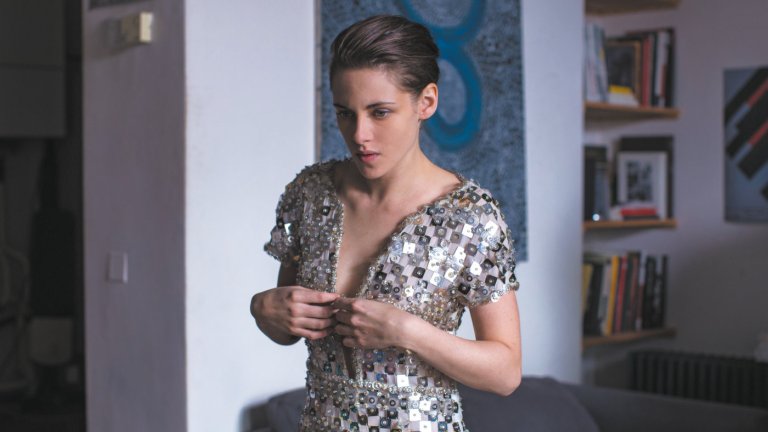 You’ve got to admire such young actors as Emma Watson, Daniel Radcliffe and Kristen Stewart. I know I do. They’ve all made so much money on their respective megahit franchises that they can now take risks with their film projects. Sometimes they make good choices and sometimes they don’t, and that’s okay because they’re becoming better actors in the process. I predict we’ll see all of them winning major acting awards in the coming years. (Stewart has already become the first American actress to win a César, the French equivalent of an Oscar.)

Speaking of K-Stew, she’s teamed up again with French director Olivier Assayas (CLOUDS OF SILS MARIA) to play a personal shopper to a socialite in his latest film, aptly titled PERSONAL SHOPPER. Yes, I know what you’re thinking. In CLOUDS, Stewart plays a personal assistant to a famous actress – not all that different. But PERSONAL SHOPPER is a very different story. This one’s a moody, slow-burning mystery-thriller. As the film opens, we find personal shopper Maureen Cartwright (Stewart, STILL ALICE; CAFÉ SOCIETY; BILLY LYNN’S LONG HALF-TIME WALK) somewhere in France settling into an empty mansion for the night. We soon learn that this was her late twin brother’s house before he died of a genetic heart defect just three months earlier. (Don’t ask how he could afford such a nice place at his age because that question is never addressed.) She and Lewis, it seems, had a number of things in common. Not only does she have the same heart condition, they both are/were mediums and they had made a pact before he died that whoever goes off to the netherworld first will send a message back to the surviving sibling. So she’s sticking around Paris in a job she hates waiting for her brother to contact her. As the sun sets over the rambling manor, with no lights to offer her comfort or security, she starts to hear noises. Is her brother trying to contact her, is it another spirit or is it just the wind? Maureen, it seems, is not a very astute medium.

Later, back in Paris, Maureen has to deal with her self-important boss, Kyra (another Assayas ingénue, Austrian actress Nora von Waldstätten, CLOUDS OF SILS MARIA), who is rarely around. So we see Maureen reading notes left behind by Kyra and then tootling off on her scooter to the city’s high fashion boutiques where she picks up a belt here and a blingy dress there for the diva. At one point, she even gets on the Eurostar to buy a few things in London before heading right back to Kyra’s stylish flat. But Maureen is a miserable mess, hopelessly frustrated because she can’t seem to make contact with Lewis while having an identity crisis at the same time. It probably doesn’t help that her boyfriend has gone off to Oman (of all places) to work, leaving them to FaceTime each other to stay in touch.

Her luck seems to change, though, while she’s on that train to London. She receives a series of cryptic texts from someone – or something – who knows her inner thoughts and what she really wants. For the next 20 minutes, we watch as Maureen engages in some edge-of-your-seat finger tapping with the mysterious stranger, as we all try to figure out if it’s Lewis who’s writing to her or someone else with malevolent intentions. Yes, it really was that boring to watch, but then the story takes another dark turn when Maureen returns to Paris to find that someone she knows has been brutally murdered. Was that Lewis’ signal?

I’ll grant that Assayas has created a highly opaque story that leaves you guessing right to the end as to where it’s heading. But, at the same time, there is so little dialogue that we’re often left watching Stewart channelling her best impression of an angst-ridden Jesse Eisenberg for more time than should legally be allowed. Moreover, all the characters – Maureen included – are so bland that we just don’t care what happens to them.

As the closing credit rolled up the screen at the film’s premiere at the Cannes Film Festival last year, it was met with a rousing chorus of boos. Nevertheless, the festival’s jury decided to bestow Assayas with the Prix de la mise en scène (Best Director) award. Now that it’s getting a commercial release around the world, audiences are decidedly less enthusiastic about the film than critics are. I’m with the audiences on this one. I didn’t boo though. I just didn’t care for it.