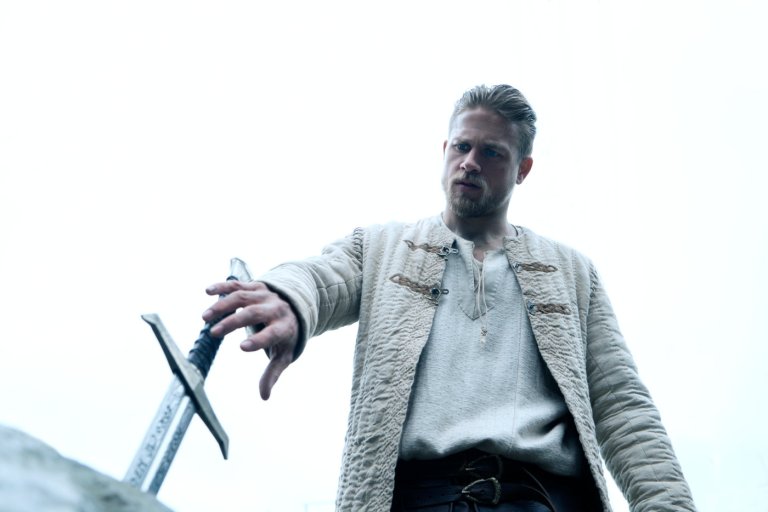 Let’s hope Jackie Kennedy doesn’t get to see Guy Ritchie’s KING ARTHUR: LEGEND OF THE SWORD wherever she is. The romanticism of Richard Harris’ Camelot that she and JFK so adored is completely absent in this crass and frenetic interpretation of the British legend.

Arthur is barely out of diapers (if they had such things back then) as the story opens. His father, Uther Pendragon (Eric Bana, HULK), is king but Uther’s younger brother, Vortigern (Jude Law, the SHERLOCK HOLMES franchise; SPY), has teamed up with the evil mage, Mordred, to lay siege to the throne. In GAME OF THRONES fashion, Mordred unleashes King Kong-sized elephants to wreak havoc on Uther’s castle and the surrounding fortifications but Uther’s got a trick up his sleeve – the sword Excalibur. Uther singlehandedly defeats the usurpers but it’s Vortigern who has the final word on the matter when he kills older brother. Fortunately, Uther is able to spirit young Arthur away on a boat where he floats down the Thames to Londinium. There he’s discovered like baby Moses by some prostitutes who take him into their brothel and raise him as one of their own.

The film then shifts into high gear as we watch Arthur grow up in quick cuts that shows him first getting bullied by the neighbourhood lads then, as a teenager, learning how to defend himself by George, the city’s only Chinese who no doubt runs the country’s only martial arts school, and finally, as a young man, becoming a very capable back-alley thug, joining a merry band of thieves who rob from the rich Viking traders and shake down anyone else who crosses their path. Think SNATCH set in a post-apocalyptic medieval England.

When Excalibur reappears, Vortigern, who now dresses like Mussolini, rounds up young men from all corners of his kingdom, hoping to find Arthur (Charlie Hunnam, TV’s SONS OF ANARCHY), who, legend says, will be able to pull the sword from the stone. When Arthur does show up and is successful in removing the sword, Vortigern tries to behead him but he is stymied by Arthur’s band of fellow rogues and an unnamed mage who was sent by Merlin to teach Arthur how to master the power of the sword. This then sets the two men on an epic clash where only one will survive.

KING ARTHUR: LEGEND OF THE SWORD has all the hallmarks of a Guy Ritchie movie – a thumping soundtrack, jerky camerawork interspersed with high-speed slow-motion sequences, a bunch of bros with Cockney accents and quick-cut flashback (and flash forward) scenes to fill in backstories. There’s nothing refined about this Arthur or this Camelot. This is pure, in-your-face, video game fantasy.

If that’s not enough, there’s also a cameo by that acting great, David Beckham, who plays one of Vortigern officers. I can understand that Ritchie and Beckham are probably friends but friends aren’t supposed to let friends make bad choices. Casting Beckham, particularly in a scene that’s pivotal to the film, was an awful choice. If Beckham is smart, he’ll give up acting and go back to the things he does best.

Ritchie has said that this film will be the first of a six-part franchise. Given its poor reception by critics and that Warner Bros pushed the film’s release date back a number of times before its eventual release, I can’t imagine we’ll be seeing more of this Arthur anytime soon. Thank the mages!

Here are a couple bits of trivia for you: The current US Treasury Secretary, Steven Mnuchin, is one of the film’s producers, and Katie McGrath, who plays Voltigern’s wife for a very brief scene was on the TV show MERLIN.

9 thoughts on “Movie Review: King Arthur: Legend of the Sword”