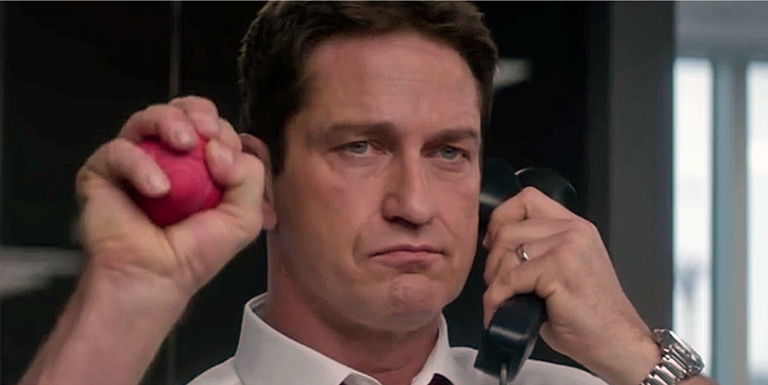 Not to be confused with the 2000 film starring Nicolas Cage (that one was called THE FAMILY MAN), A FAMILY MAN tells the story of a hard-driving corporate headhunter who puts his work ahead of his family but ultimately finds redemption when he has a major family crisis to deal with. Imagine a contemporary version of Dickens’ A Christmas Carol but without the ghosts… or a tree. Well, there is a tree but it’s wasted.

Dane Jensen (Gerard Butler, 300) is a very successful recruiter for Chicago-based firm that is owned and ferociously run by Ed Blackridge (Willem Dafoe, JOHN WICK). When Blackridge announces that he’s going to bow out of his eponymous company at the end of the year, he pits his two team leaders, Dane and Lynn Vogel (Alison Brie, TV’s MAD MEN), against each other for two months in a winner-take-all match for his position. If Jensen wasn’t motivated enough before, he most definitely is now. Unfortunately, that doesn’t sit too well with his wife, Elise (Gretchen Mol, MANCHESTER BY THE SEA), who feels that he is neglecting both her and their three children. Dane is forced to re-evaluate his priorities at possibly the worst time in his professional career when their 10-year-old son, Ryan (Max Jenkins), is diagnosed with leukemia.

There is so much that’s wrong with this film. Aside from being completely predictable after the first twenty minutes, screenwriter Bill Dubuque, himself an ex-headhunter, can’t seem to adequately capture either the ruthlessness of a boiler room or the worry of a hospital room. Sure, the opening scenes in the office have potential as we see Dane pull out all the stops to ensure that he and his team members can ring that sales bell more often than Lynn and her team members can. The dialogue is somewhat reminiscent of David Mamet’s Pulitzer Prize-winning play (and later film) Glengarry Glen Ross but ultimately falls quite short of the mark, especially when the big “C” rears its ugly head and the story’s focus shifts from office to home and hospital. At that point, Lynn is shoved to the sidelines as it’s obvious where her story arc is going. Poor Alison Brie. She deserves so much better than this film!

To call Dane a perfect schmuck would be an understatement. He not only calls his son “fat” but he chastises Elise for spending too long servicing his nether regions. And while Dane may be a Grade A jerk, Elise nags about his behaviour but does nothing more. Is the quartz countertop in the kitchen really worth all the emotional abuse? Then there’s Dane’s wholly unethical tactics at work. In most companies, he would be fired. At Blackridge, it’s encouraged. Because Dane is starting from such a low point in our esteem, he has a mountain to climb when Ryan gets sick. To try to win our support, Dubuque makes Ryan wise beyond his years. He sees the good that’s deep down in his dad. It makes you want to cry… or that’s the intention at least. But there are no tears to be had here. Just a lot of eye rolling as we watch Dane try to juggle work and family demands, and slowly transform into a good guy. Sadly, at the pivotal redemptive moment, the film takes the sappy option and eye rolling turns into throat gagging. Can I please rewrite this screenplay?

Maybe we should feel sorry for Gerard Butler instead of Dane Jensen. Looking at Butler’s filmography page on Rotten Tomatoes, you see a lot more green splats than ripe, juicy tomatoes. The poor guy can’t seem to catch a break. He even threw some money into this project, becoming one of the film’s producers. To add salt to his wounds, first-time director Mark Williams (probably another mistake) hired a dialect coach for Butler to flatten out his Scottish accent. He ended up sounding and looking like he had a wad of cotton in his mouth.

A FAMILY MAN is a complete throwaway. If you have a choice between watching it and, let’s say, cleaning the underside of your dining table, do the cleaning. It’ll be so much more rewarding.

8 thoughts on “Movie Review: A Family Man (aka The Headhunter’s Calling)”