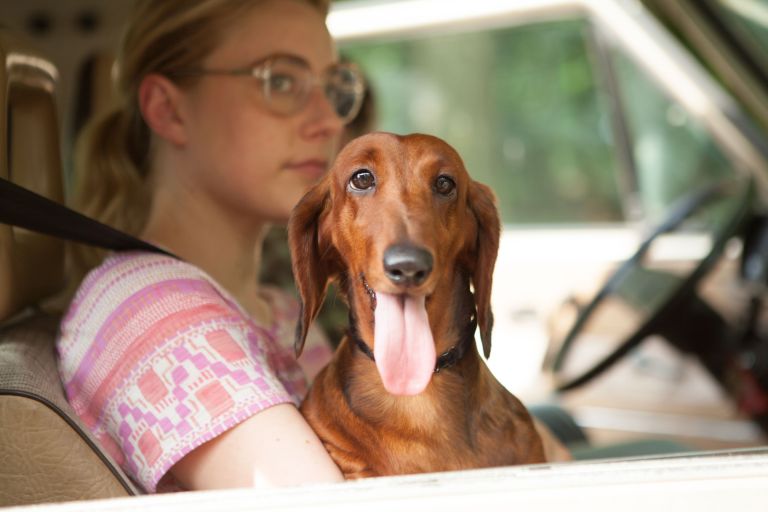 Not to be confused with the film about the disgraced congressman from New York and his oft-tweeted “sausage” (that’s “ei” and this is “ie” anyway), WIENER-DOG follows a dachshund as she gets shunted from dysfunctional owner to dysfunctional owner. Told in four parts with an absurdly funny – or just plain bizarre, depending on your taste – interlude in the middle, the film is the latest work of cinema’s maestro of misanthropy, its monarch of melancholy, Todd Solondz.

We first meet the doomed canine when upper middle-class jerk, Danny (played with relish by Tracy Letts, ELVIS & NIXON), brings it home from the shelter for his son, Remi (Keaton Nigel Cooke), who just received a good medical report about his cancer condition. While Remi absolutely loves the newly-dubbed Wiener-Dog, Danny and certainly his wife, Dina (Julie Delpy, the “BEFORE” trilogy), are less than happy with the prospect of having to train the dog and look after its reproductive, or non-reproductive, needs. It should be noted that dachshunds are quite headstrong and they’re not the easiest to train and Danny, who is used to having everything his way, quickly gets engaged in a test of wills with Wiener-Dog. But it’s really Dina who must have ice water running through her veins. In one amusing scene, she quite callously explains to Remi why Wiener-Dog must be spayed before it’s too late. It’s hard to know who to feel more sorry for – the dog or the boy.

In the second story, Wiener-Dog has moved on and gets adopted by Dawn Wiener (Greta Gerwig, FRANCES HA; MISTRESS AMERICA; MAGGIE’S PLAN; JACKIE). If that name sounds familiar, it’s because she was a character in Solondz’s 1995 breakthrough film, WELCOME TO THE DOLLHOUSE. Back then she was an awkward seventh grader; now she’s an awkward veterinary assistant. Not coincidentally, Dawn’s nickname in school was “Wiener-Dog”. Now she’s the owner of Wiener-Dog. Back to the present day and Dawn runs into her high school tormentor, Brandon (this time played by Macaulay Culkin’s younger brother, Kieran). When Brandon invites Dawn for a road trip to Ohio to ostensibly score some crystal meth, Dawn, who is desperately lonely, agrees and brings Wiener-Dog along for the ride. In Ohio, she meets Brandon’s brother and sister-in-law who both take to Wiener-Dog, and Dawn decides to leave her with them. As the film heads into the musical interlude by TV’s SOUTH PARK composer Marc Shaiman, it looks like Wiener-Dog’s days will only be sunny and bright from now on.

But that’s not to be because this is a Todd Solondz film. In the third story, Wiener-Dog is now owned by failed Hollywood screenwriter turned New York City film school lecturer, Dave Schmerz (Danny DeVito at his sad-sack best). Schmerz’s life couldn’t be more pathetic. His agent knows Dave is washed up but won’t tell Dave that, and his department head tells him that both his colleagues and students have complained about his constant negativity. What’s a guy to do in such a situation? I won’t say but it involves the dog wearing a yellow dress. Again, depending on your perspective, it’s either hysterically funny or completely off the wall.

In the fourth story, Wiener-Dog has been adopted by a bitter, old woman (Ellen Burstyn, THE EXORCIST; ALICE DOESN’T LIVE HERE ANYMORE) who lives with her caregiver in her overstuffed house. Though the woman wears oversized sunglasses to shield herself from the world, the dog, now inappropriately named “Cancer”, seems to bring her some solace. While sitting outside with the dog, she dreams of what her life would have been like had she been a nicer person all these years. Waking up and seeing the world for the first time in a long time, she realises that the dog has run away. Solondz doesn’t give you a chance to feel sad for the woman though. It’s Wiener-Dog we feel sorry for.

This is not a film for everyone. It is terribly dark. If you have a warped sense of humour, you’ll enjoy it. If, however, you’ve been thinking about going on anti-depressants, you’re better off staying far away. Audiences and critics have been quite divided, with critics liking it more than audiences. If you’ve already seen some of Solondz’s other films (this is only his seventh film in 21 years), you know what you’ll be in for with WIENER-DOG. It may not be his best effort but it is unique and it does show well what he thinks about people, film schools and director Richard Linklater (not once but twice). The acting, though, is solid all around. Delpy is probably the best of the lot with the passive-aggressive way her character deals with her son’s soulful innocence. He is one of the film’s truly good people but you know his parents are going to do their darnedest to beat that out of him. As for the dog, or dogs, because I think Solondz used four of them in the filming, if you are considering adopting a dachshund, you may want to think twice about it especially after seeing the first story. I’m laughing just thinking about it.

The film opens next week (July 13, 2017) in Hong Kong. I can’t see that local audiences will appreciate this brand of humour so I wouldn’t expect it to last very long, which is probably why it’s been sandwiched in between two big-budget Hollywood films – SPIDERMAN: HOMECOMING and WAR FOR THE PLANET OF THE APES.