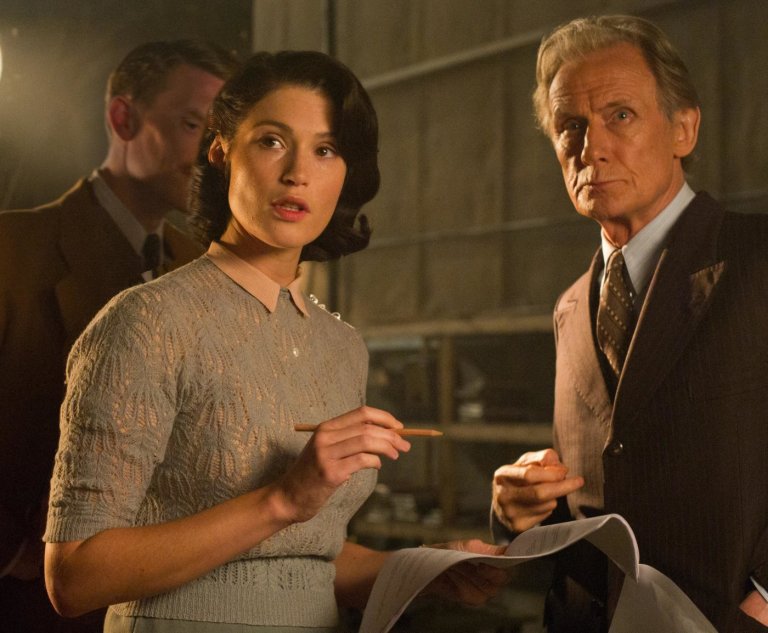 As much as this is turning out to be the Summer of Female Empowerment at the cinemas, Elle UK recently reported that actor Henry Cavill (SUPERMAN) got paid a whopping 46 times more to do his superhero film than actress Gal Gadot (WONDER WOMAN) received to do hers. Clearly, while Hollywood is quite happy to support the concept of gender equality on the screen, it is sadly unwilling to do the same in its business dealings. Don’t be angry with just Hollywood though, as it is no different than most other employers. Women all over the world continue to be paid less than men for doing the same job.

The period piece, THE FINEST, briefly tackles the matter of pay discrimination during WWII. It was during that time when many women joined the workforce for the first time, and although employers were often desperate to fill positions left vacant by their male employees who had either gone off to war or had died at home, they still insisted that these new hires be paid less than their male counterparts. The women, happy to be working either out of necessity or choice, accepted these terms because that’s the way it was. In the film, Catrin Cole (Gemma Arterton, QUANTUM OF SOLACE) is a young Welsh woman who thinks she’s landed a job as a secretary in the Ministry of Information in wartime London. However, her writing ability has caught the attention of the people who make morale-boosting films for the government and she immediately finds herself writing scripts for the pro-war shorts that are shown before the cinema’s main features. When word comes to her department about two British sisters who may have rescued some soldiers during the evacuation of Dunkirk, she is immediately dispatched down to the coast to interview the sisters for a potential film treatment. Unfortunately, it turns out to be much ado about nothing as the story is a non-event and the women are as dull as dishwater. Catrin, though, sees an opportunity for herself and she embellishes the story, thereby getting the green light to join scriptwriters, Tom Buckley (Sam Claflin, ME BEFORE YOU) and Raymond Parfitt (an underutilized Paul Ritter), to write the screenplay for a new propaganda film… for, of course, a fraction of what the men at her pay grade are receiving.

As she and her colleagues flesh out the story, Catrin sees how various forces influence the production process — from the aging matinee idol, Ambrose Hilliard (Bill Nighy, THE BEST EXOTIC MARIGOLD HOTEL), who takes exception to his character being killed off early in the third act, to the government’s war secretary (Jeremy Irons), who wants the story to include an American character in order to appeal to American audiences and ultimately push that country into joining the Allied forces in their fight against the Nazis. (This is clearly pre-Pearl Harbor days.) But Catrin seems to take each challenge in stride as she enjoys both the work and the money even if it puts both physical and emotional distance between her and her struggling artist husband, Ellis (Jack Huston, BEN-HUR).

When I saw the film’s trailer a few weeks back, I thought for sure that the film would be a romp. I was wrong. While it is amusing in parts, some scenes — particularly those depicting the London Blitz — are quite sobering. If anything, I wish the film would have been more on both extremes — more madcap and more devastating. I’m reminded of the TV show M*A*S*H, which would have both viewers and the characters laughing one moment and crying the next. It’s a tall order for a director to achieve but that would have made this a great film. Instead, THEIR FINEST is an okay film. To both director Lone Scherfig (AN EDUCATION) and screenwriter Gaby Chiappe’s credit (the film is based on Lissa Evans’ 2009 novel, Their Finest Hour and a Half, which is a better title than just Their Finest), the women didn’t shy away from giving Catrin’s story a bittersweet ending. Unfortunately, Catrin’s budding relationship with Tom seems contrived, not because of the circumstances that the war put them in but because Claflin is such a colourless actor to watch. I thought he was boring in ME BEFORE YOU. Now I think he’s boring all the time. Richard Madden (GOT’s Robb Stark) would have been a better choice to play Tom.

Thankfully, the movie benefits from the performances of Arterton and Nighy, who are both delightful in scenes together and apart. Granted, some of Nighy’s scenes have little to do with moving the story forward but he’s a joy to watch nevertheless as he delivers his lines with wonderful panache.

While THEIR FINEST is definitely a crowd-pleaser, it’s not going to win any major awards. If you miss seeing it in the cinema, watch it on airplane. It’s that calibre of movie.

Watch the review recorded on Facebook Live on Thursday morning, July 20th, at about 8:30 am!

14 thoughts on “Movie Review: Their Finest”