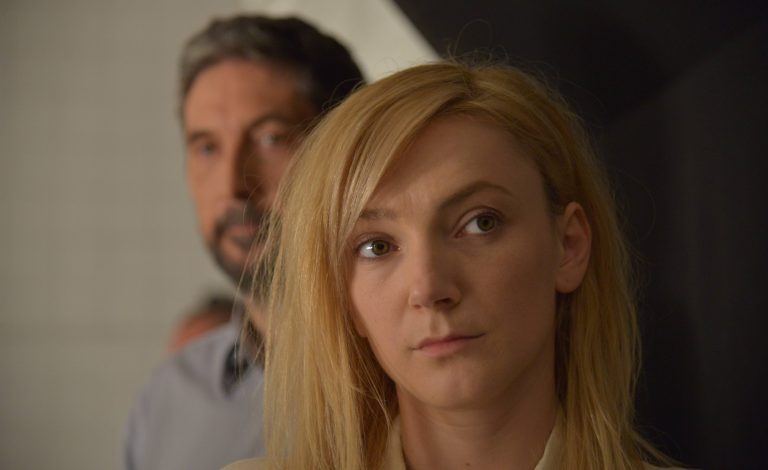 I mentioned this drama from Hungary a few months ago when it played at the Hong Kong International Film Festival. As it has now come to Hong Kong’s cinemas, I’ll give it a more in-depth review here.

Endre and Mária work at the same abattoir on the outskirts of Budapest where he is the financial director and she is a recently-hired quality control inspector. Endre, who is disabled in one arm, is a quiet but respected man at the factory. He’d be perfectly happy if everyone just got on with their jobs without any drama. Unfortunately, that doesn’t happen when Mária’s colleagues start to complain about her. Mária, it seems, is highly diligent and exact – unlike her colleagues – and she’s not the type who makes friends. She is as painfully shy around men as Endre is around women, which makes their first conversation an uncomfortable experience for both.

After a vial of bovine pheromone disappears, the company bosses decide to bring in a psychologist to evaluate the employees to uncover who stole it. In the course of interviewing Endre and Mária separately, the psychologist learns that the pair has been sharing the same dream each night. When Endre and Mária learn of this, they are naturally both surprised and confused but they decide to try and bring their dreams into their conscious world. Both, however, are more than a little socially inept and their attempt to consummate their relationship doesn’t go quite as well as they had hoped.

ON BODY AND SOUL is an interesting and well-made film though it’s very slow going. The snowy forest scenes with the stag and doe are visually stunning though they go on for such long periods that you could be forgiven for thinking that you’re watching a nature film instead of a drama. Eventually, they do make sense but your patience will certainly be pushed to its limits by then. And, as pristine as those sylvan scenes are, the scenes in the abattoir are shockingly brutal to watch. If they don’t turn you off meat forever, nothing will! As we get to know the gentle souls of Endre and Mária, we also begin to understand the purpose of these scenes too.

Written and directed by Ildikó Enyedi, whose 1989 film, MY TWENTIETH CENTURY, won the Cannes Camera d’Or prize for first feature, ON BODY AND SOUL was the big winner at this year’s Berlinale taking home four awards including the Golden Bear for Best Film. This is a unique and sometimes amusing look at a relationship between two lonely hearts who struggle to find the same physical connection that their souls evidently have with each other. If you can make it through the abattoir and nature scenes, it’s well worth the journey.

One thought on “Movie Review: On Body and Soul (Teströl és lélekröl)”