When I did my first roundup of movies to watch on typhoon days a year ago, I never expected it to be such a popular review. As we’ve just come through two typhoons in four days with the possibility of third one hitting us this Sunday, I thought I’d look at a few more films you can watch on typhoon days. As is the case with the “origin” review, this “sequel” includes some recently released movies that you may not have heard of. They’re available both on demand and on DVD so you can watch them when you’re unexpectedly stuck inside for a few hours. Actually, you should watch these films regardless of the weather. 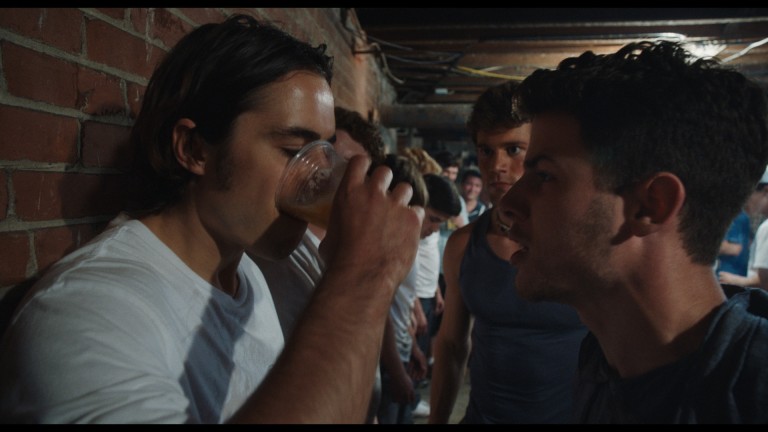 If you’ve got a son who is about to go off to an American college, or perhaps you are a guy who is considering joining the Greek life on campus, this is a film you need to see. That’s not to say that all frats are like this one but too many are, especially when you consider the death last February of Penn State student Timothy Piazza.

In GOAT, Brad (Ben Schnetzer, THE BOOK THIEF), is a fairly quiet, young man who is about to go off to the same college where his older and very popular brother, Brett (singer Nick Jonas), already attends. Just before that happens though, he is brutally assaulted by a couple of guys who steal his car. Though Brad is still traumatised from the attack, he nevertheless decides to pledge to Brett’s fraternity, (the fictitious) Phi Sigma Mu. Brett knows what is in store for Brad and he tries to talk him out of pledging but Brad wants to reclaim his masculinity and he is drawn to the frat’s promise of protection, lifelong friendship and popularity with the girls. As Hell Week begins and the pledges are put through a series of both grueling and degrading tasks, the brothers’ bond starts to unravel, leaving them both to decide which brotherhood is more important.

The film is based on the 2004 memoir by Brad Land, who attended Clemson University in South Carolina where his brother was already a member of the very real Kappa Sigma fraternity. To its credit, the film doesn’t shy away from showing the hazing rituals that these fraternities put their pledges through – from drinking huge and sometimes lethal amounts of beer, to being blindfolded and locked in a dog’s cage, to cleaning up goat excrement, and those are just the “easy” tests – nor does it offer any opinion on whether it’s right or wrong. It just is and these young men can choose to accept it or not. However, the pressure on these guys to submit to the verbal and physical abuse is very high, and it seems that the stakes keep getting raised each year. For Brad, the experience causes the memories of his recent ordeal to come flooding back to him.

The performances by both Schnetzer and Jonas are excellent and completely believable. My understanding is that neither actor attended university so they never experienced the Greek life first-hand. James Franco (WHY HIM?; THE INTERVIEW) makes a cameo as an alumnus who comes back to the frat house to party with the boys. It’s an extremely creepy scene but at the same time realistic. I understand that his character is based on a real person in the author’s life.

The film is co-written by David Gordon Green, who also wrote and directed PRINCE AVALANCHE from a few years back, and directed by Andrew Neel, who doesn’t have a huge list of credits to his name… yet.

Admittedly, GOAT can be very hard going, particularly during the hazing scenes, but the film is well worth your time.

Like Noah Baumbach (FRANCES HA; MISTRESS AMERICA; WHILE WE’RE YOUNG), director Alex Ross Perry doesn’t shy away from bringing challenging characters to the screen. His 2014 film, LISTEN UP PHILIP, about a self-absorbed, narcissistic novelist is, at times, tough to watch but it works thanks to Perry’s solid writing and the good performances all around. His next film, QUEEN OF EARTH, which pretty much stuck to the festival circuit before being released on DVD last summer, is almost as tough to watch but again works because of the writing and the performances, this time by Elisabeth Moss (who also appeared in LISTEN UP PHILIP; TV’s THE HANDMAID’S TALE) and Katherine Waterston (FANTASTIC BEASTS AND WHERE TO FIND THEM; ALIEN: COVENANT).

The film opens with a disheveled and distraught Catherine (Moss) who is being dumped by her boyfriend, James (the wonderfully named Kentucker Audley). The camera is focused squarely on Catherine’s face as we watch her deal with the realisation that the two men in her life, James and her father, have abandoned her in short order. Catherine’s dad, we learn, was a prominent New York City artist and it appears that he committed suicide due to depression. Catherine also has her issues, as James bluntly points out to her. Especially since her father’s death a few months’ earlier, she has become completely dependent upon him. In need to get away from the city, her old friend, Virginia – “Ginny” only to her friends – invites her to her family’s tranquil lakeside cottage somewhere upstate. In flashbacks we learn that the two women were up at the cottage together the summer before. Back then it was Virginia who needed consoling. Catherine, on the other hand, was on Cloud 9 at that time, happy in her job managing the affairs of her father’s career and in a relationship with James. Perhaps it was insensitivity or perhaps it was gloating, she brought James along for what should have been a quiet week together for just the girls. This time around, as Catherine struggles with her own sanity, Virginia is there stick the knife in her back ever so gently, agreeing with James’ assessment of Catherine’s clinginess, putting her down for riding on her father’s coattails instead of forging her own artistic career, and even inviting Rich (Patrick Fugit), the guy next door, over for a bit of afternoon and evening delight. As the week goes by, Catherine descends further and further into delusion and depression while Virginia watches and chooses her moments to softly nudge Catherine closer to the edge.

There’s something very late ’60s/early ’70s to this film (just watch the trailer below and you’ll see what I mean), though it is set in contemporary time. Keegan DeWitt’s evocatively sparse score certainly helps. Yet it’s the type of film that Ingmar Bergman may have done – a psychological drama about two women who play mind games with each other and those around them. Perry has said in interviews that he has been influenced by arthouse films from that era. But the big question here is are Catherine and Virginia one person or two? To be honest, I’m not sure. There is plenty of evidence to suggest that they are one person and this story is all in the imagination of that one person. Certainly, the film’s final scene would back this theory up.

Having seen Katherine Waterston in two other films this past year, I was most definitely not a fan of her acting ability but this performance is making me reassess my opinion. She does passive-aggressive really well! As for Elisabeth Moss, I’ve been a fan of hers from the first episode of TV’s MAD MAN. Here she throws herself into this character and her descent into madness is totally mesmerising to watch.

I wrote something similar in my review of LISTEN UP PHILIP: You’re going to want to turn this movie off after 10 minutes. Don’t!

Watch the review recorded on Facebook Live! Apologies for the video cutting out early. Teething problems with the new phone but at least the image and sound are better than before!