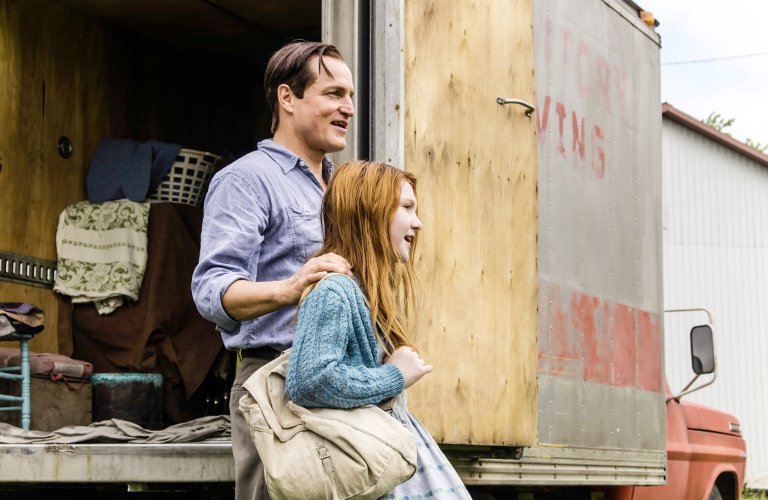 In many countries, if you want to get married, you need to get a license first. Open up a business? License. Drive a car? License. Build a house? License. Use software legally? License. What you don’t need a license for is having children but after seeing the film, THE GLASS CASTLE, you may take the view that some people should have to get a license before they can be allowed to procreate.

Rex Walls (Woody Harrelson, WAR FOR THE PLANET OF THE APES) and his wife, Rose Mary (Naomi Watts, ST. VINCENT; WHILE WE’RE YOUNG) is one such couple that probably shouldn’t have had children. Rex is a dreamer. A mechanic of sorts who could fix anything, he is never short of big ideas, including one to make coal burn more efficiently and another to build a house made of glass that would be warmed by the sun’s rays. Unfortunately, he is never able to bring those ideas to fruition, often leaving them as concepts on his drawing board and inside his head. Rose Mary is not much different, though she would be termed as a “free spirit”. Trained as a science teacher (I know this from reading the book, not from watching the film), she prefers to spend her days painting nature scenes, leaving her kids to cook their own meals at their own peril. She also has dreams and hers are of opening a gallery where people would come and spend small fortunes on her works of art. The reality, however, is that she isn’t a very good artist and no one is interested in buying her work.

Because neither Rex nor Rose Mary have any desire to settle down and earn a regular pay cheque, they and their four kids are often pulling up stakes at the drop of a hat, packing whatever they can fit into their junk heap of a car and moving further off the grid. If there isn’t enough room in the car, out it goes and one time that included the family cat. (I also know this from the book.) For the kids, it’s all one big adventure but as they get older, they start to realise that this lifestyle is neither normal nor healthy, especially when days go by and they don’t eat or when Rex disappears for few days at a time only to come home drunk or announce to them that they have to “do the skedaddle” yet again.

THE GLASS CASTLE is based on the 2005 memoir of former New York-based gossip columnist, Jeannette Walls, who is the couple’s second eldest and probably the most forgiving of all the kids of their parents’ reckless and selfish behaviour. Like the book, the film is told in flashbacks with the adult Jeannette being played by Oscar® winner, Brie Larson (ROOM; KONG: SKULL ISLAND; SHORT TERM 12; THE SPECTACULAR NOW; DON JON). The star of the film, though, is 12-year-old Ella Anderson, who plays Jeannette as she begins to understand that her parents will never be able to give her and her siblings the kind of life that they yearn for. However, unlike her older sister, Lori, who has become cynical at far too young an age, and younger brother, Brian, who has simply resigned himself to this fate, preteen Jeannette tries to keep the family together even as she and her siblings secretly plan their own orderly skedaddle. (Sadly, younger sister, Maureen, who had to endure their parents’ toxicity for many years on her own after the others left home fares worst. The book goes into greater detail on this than the film does.)

Even though Walls’ book was a huge best seller (it spent just over five years on the New York Times Best Seller list), I wasn’t a fan, perhaps because I never understood her sympathy for her parents. Even today, her mother lives with her and her husband. She’s clearly a more compassionate person than I am. Like most film adaptations of books, the film cuts out chunks of story and insight into character motivation. As a result, we don’t get to see on the screen the extent of the neglect and downright craziness that the Walls kids had to endure. The film even goes so far as to make Rex into a somewhat sympathetic figure when he really deserves very little sympathy from anyone.

The film is co-written and directed by Destin Daniel Cretton, who also made the wonderful SHORT TERM 12, the film that put Brie Larson on the map. Here, Cretton can’t seem to decide what kind of story this is. Is it a modern-day tragedy or is it a triumph of the spirit? I think the real Jeannette Walls would say it’s the latter. It doesn’t help that Cretton has stripped the adult Jeannette of any emotion, which is curious because the preteen Jeannette is filled to the brim with gumption. Perhaps the real adult Jeannette was shut down. After all, she was living a lie. She was living in a fabulous apartment on Park Avenue, engaged and later married to a successful (if completely boring) finance guy, rubbing shoulders with New York’s rich and famous, and having a successful TV career. Her greatest fear was that someone would out her. Whatever spunk she had, either went out the window at some point or she shoved it down to her ankles. Whichever it was, we don’t get to see that transformation and, because of that, Cretton makes it difficult for us to empathise with her.

I’m really ambivalent about this film. On the one hand, there are some great performances (Woody Harrelson is good too), but on the other, the story didn’t work for me. Not my favourite Brie Larson film but I’m still a fan.

Watch the review recorded on Facebook Live in RTHK Radio 4’s studio on Thursday, November 16th at 8:30 am HK time!