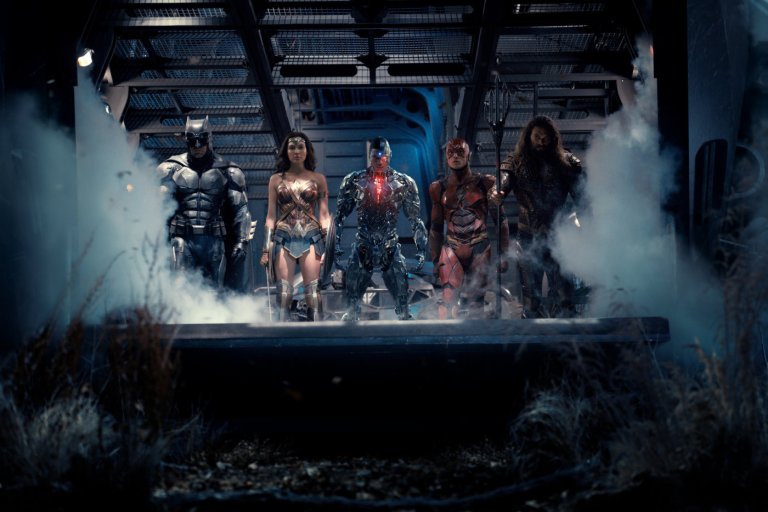 The reviews are in and JUSTICE LEAGUE is not the pre-holiday blockbuster hit that Warner Bros. had hoped it would be. Sure, there are plenty of DCEU (DC Extended Universe) fanboys and fangirls out there who are sticking with their favourite franchise, just as there are plenty of Roy Moore fanboys and fangirls out there who are sticking with their favourite pedophile, but the best thing these people can say about this film is that it’s better than the last one (meaning BATMAN V. SUPERMAN). Wow, what a ringing endorsement that is! That’s the cinematic equivalent of someone who is suffering from a bout of haemorrhoids saying that at least it’s better than having a kidney stone. Being fortunate enough never to have experienced either, I wouldn’t know if that was true, but as far as movies and movie franchises go, why does it have to be one or the other? Why do we have to go into a film with low expectations? If that’s the case, and it is, Warner Bros. needs to make some changes, and I’d say it starts with who sits in the director’s chair. This is Zack Snyder’s third DCEU film out of five in the series so far, and all three have been met with a rousing chorus of “Meh!” You’d think that the suits at Warner Bros. would be planning Snyder’s exit from the franchise by now but we haven’t heard anything yet to that effect. It’s still early days though, and for the next five films at least, which will take us up to July 2020, Snyder’s name is nowhere to be seen.

The problem with the DCEU is that the stories are dark and many of the characters, and quite often the actors who play them, are boring. Compare this to the Marvel Cinematic Universe, and, believe me, I’m not a fanboy of that franchise either. Marvel Studios has taken characters who, now let’s be honest, were not A-Listers as far as their universe goes and made them into stars that can support multiple films that have been hugely successful. Here, I’m referring to the Guardians of the Galaxy characters and Thor, whose films have been critically received and have done well at the box office. Their success has been due to light and fun stories, solid direction and actors who have charisma. Just because the DCEU franchise isn’t as successful as its Marvel counterpart, it doesn’t mean it’s going to disappear tomorrow though. Their films are still hugely profitable, but in the corporate boardroom of Warner Bros., you’d better believe that the execs are more than a little nervous.

Now to the film itself. In case you missed BATMAN V. SUPERMAN: DAWN OF JUSTICE last year, and kudos to you if you did, Superman (Henry Cavill) is dead. Lex Luthor (Jesse Eisenberg, CAFÉ SOCIETY; THE END OF THE TOUR) is in jail and Batman/Bruce Wayne (Ben Affleck, TO THE WONDER) has Lex’s notes and drawings that allude to three boxes which, when combined, can unleash a whole heap of disaster upon the planet. Bruce also has Lex’s research into some metahumans he uncovered, including Barry Allen aka Flash (Ezra Miller, the FANTASTIC BEASTS franchise), Arthur Curry aka Aquaman (Jason Momoa, TV’s GAME OF THRONES), and Victor Stone aka Cyborg (Ray Fisher). As JUSTICE LEAGUE opens, Bruce reaches out to his new friend, Diana Prince aka Wonder Woman (Gal Gadot, WONDER WOMAN), to help him find these boxes before they fall into the wrong hands, and track down those three metahumans and recruit them into their just cause. As it turns out, Diana knows what these boxes are and who wants them. They’re called Mother Boxes and they’re akin to supercomputers with the ability to manipulate energy. If you’ve read the comics, you know what they’re all about. We also learn that the evil Steppenwolf (voiced by Ciaran Hinds, BLEED FOR THIS; SILENCE), an angry giant with a horned helmet, wants them so that he can use their power to devastating effect. Why he wants to do that is dealt with in a very quick voiceover by Diana that probably asks more questions than it answers. At least it did that for me. Again, you would have to know the character from the comics to understand his motivation.

The first 30 minutes of the film is spent setting up the premise for the ultimate battle and meeting all the new characters. Because there is so much information to churn through, it seems, at times, rather rushed and character development — particularly that of Cyborg, Aquaman and Flash — is scant at best. Other times, however, I was sitting there thinking, “Get on with it already!” Bruce tells Diana that he needs these three metahumans on the team but he doesn’t say why these three. What are they bringing to the table that will make them so indispensable later on? That disconnect is particularly evident when it comes to Aquaman. His greatest strength — that of being able to communicate with aquatic life — isn’t even used in this film. At least Flash’s lightning speed comes in handy a couple of times. As for Cyborg, he himself doesn’t even know what he’s capable of so how does Bruce?

Thankfully, the story isn’t all doom and gloom, and there are some light moments sprinkled throughout. These have been attributed to Joss Whedon, who also wrote some of the Marvel films. Whedon was brought in a few months ago when the studio wanted to give Gal Gadot more screen time following the success of WONDER WOMAN and Snyder wasn’t available to continue due to a family tragedy. (Whedon is uncredited, most likely at his own request.) The studio reportedly spent US$25 million on reshoots, a figure that is very high by Hollywood standards, but at least the money was well spent. For that amount, we got plenty of shots of Gadot’s doe-like eyes and beautiful smile, and more than a few supercharged one-liners from Miller. If it weren’t for those two, this film would have been a complete downer. I would say that Affleck is a total bore but the winner of that award goes to Cavill. The man has absolutely no screen presence.

Going back to Snyder, though, his hand is very much in evidence. The colour palate is very dark, which makes seeing it in 3D a complete waste of money. There are also numerous sequences of his hallmark speed ramping. Yawn. The film is also very much targeted to post-pubescent boys. Here, the Amazonians are wearing significantly less clothing compared to what they wore in WONDER WOMAN.

Like many others out there, I’m also in the “Meh!” camp on JUSTICE LEAGUE. If I was in charge of the DCEU, I’d find a new director (perhaps WONDER WOMAN director, Patty Jenkins?), lighten up the stories, and start looking for replacements for Ben Affleck and Henry Cavill. At least now, however, I’m interested in seeing the Flash movie, called FLASHPOINT. Unfortunately, it’s not due out until at least 2020.

No Facebook Live this week due to ongoing discussions related to copyright.