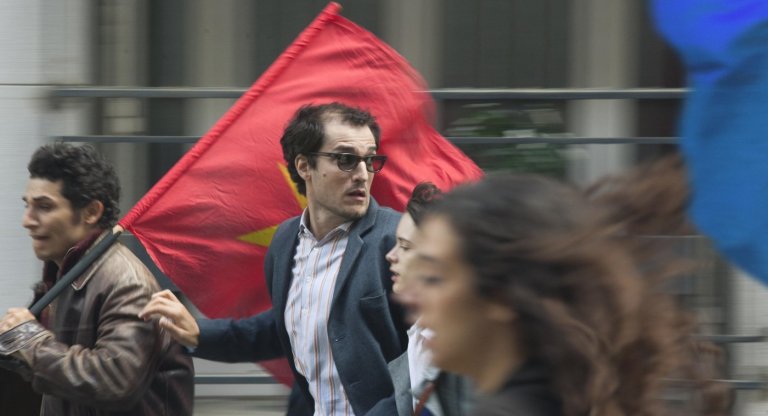 Few people have had as much influence on contemporary filmmaking as Jean-Luc Godard. Since BREATHLESS, his 1960 breakthrough film, Godard has shaped the way we see the world on screen, changing the language of cinema and inspiring generations of filmmakers that came after him, including the likes of Martin Scorsese, Steven Soderberg, Jim Jarmusch, Bernardo Bertolucci and Wong Kar-wai to name just a few. As part of the Nouvelle Vague (New Wave) movement, Godard broke with classical French filmmaking of that time, choosing instead to infuse his works with jump cuts, long takes, references to other films, frank nudity and character asides. Even his use of film stock and lighting were innovative. (If you think this sounds a lot like Quentin Tarantino’s M.O., you wouldn’t be wrong.) In eight short years, Godard made 15 films and most, if not all, have been hailed as critical masterpieces.

But in May 1968, France was a land of turmoil as demonstrations, general strikes and student occupations ground the country to a halt. Godard, whose films always had a political bent to them, moved even further to the left, to the point of turning his back on his earlier work and that of his Nouvelle Vague colleagues, and joining up with a young Maoist student, Jean-Pierre Gorin, to make five films that had strong Maoist messages in them. It is this tempestuous period of Godard’s life that Oscar-winning filmmaker, Michel Hazanavicius (THE ARTIST) has covered in his new film, LE REDOUTABLE (REDOUBTABLE).

Based on the 2015 memoir, “Un an après” (“One Year Later”), by French actress and novelist Anne Wiazemsky, Hazanavicius mixes fact and fantasy to retell Wiazemsky’s relationship with Godard after he cast her in his 1967 film LA CHINOISE and up to his so-called “Revolutionary period” of filmmaking. (Wiazemsky was Godard’s second wife, having married him at age 20. He was 37. Though they were married for 12 years, they separated after just three.) Not your run-of-the-mill biopic, REDOUBTABLE is presented as if it were a Godard film but to humorous effect. Hazanavicius doesn’t want to call this film a pastiche though. He’d prefer to call it a “hijacking” or a “variation on a theme”. There are jump cuts, long takes, references to other films, nudity and character asides. There are also nods and winks to Godard’s use of different film stock, camera angles, lighting and primary colours. There is even a running gag concerning Godard’s (charmingly played by Louis Garrel, SAINT LAURENT) signature tinted glasses which may be connected to a character in LA CHINOISE who sports different sunglasses throughout the film.

When it was announced that Hazanavicius would making this film in Godard’s style, Godard himself called it a “stupid idea”. There was concern that the famous director might use some of his influence and get the film’s premiere pulled from the Cannes Film Festival last May but that never happened. Interestingly, there is an amusing scene in REDOUBTABLE where Godard, Wiazemsky (played by Stacy Martin, NYMPHOMANIAC) and some of their friends head to Cannes to shut the 1968 festival down.

Godard “dogmatists”, as Hazanavicius calls them, have taken exception to this film, criticising it for making light of such a demigod. Meanwhile, those who are less familiar with Godard’s work are finding the film amusing but questioning the point of it all. Hazanavicius told me that when he read Wiazemsky’s book, he immediately saw the humour in it. Others had already approached her for the film rights and she turned them all down but Hazanavicius was the first person to see what she saw and she agreed to option the rights to him. Sadly, Wiazemsky passed away a few weeks ago of breast cancer but the director said she did see the movie four times and was quite touched by it. He still doesn’t know if Godard has seen it though.

If you’re not familiar with Godard’s work, REDOUBTABLE is a safe introduction. If you are, you may or may not like the film depending on your veneration of the now 87-year-old icon. Certainly, REDOUBTABLE pulls no punches in showing the man for all his warts and foibles. Even so, Godard was, and still is, a redoubtable force in filmmaking.

Watch the review recorded on Facebook Live in RTHK Radio 4’s studio on Thursday, December 7th at 8:30 am HK time!