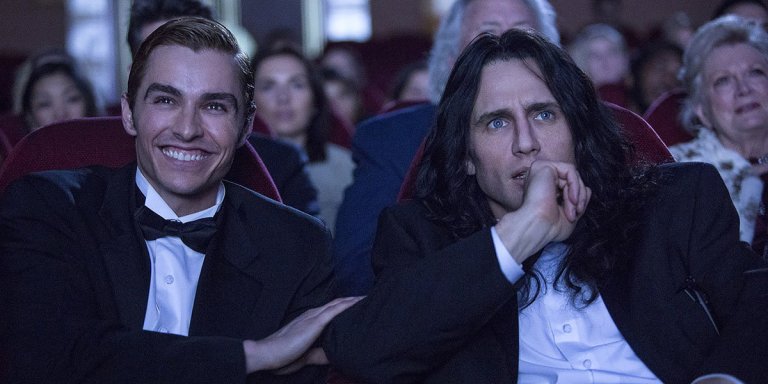 File THE DISASTER ARTIST under “Truth is often stranger than fiction”. This is one story that if you didn’t know that it’s true, you would never believe it. Based on the 2013 book of the same name (to be precise, the book’s title is The Disaster Artist: My Life Inside The Room, the Greatest Bad Movie Ever Made), the movie chronicles the real-life friendship between two aspiring actors, Tommy Wiseau and Greg Sestero (the book’s co-author) and the movie they made together ten years earlier when no one in Hollywood would give them a job. That movie, THE ROOM, is generally recognised as one of the worst films ever made but has since become a cult classic and is routinely screened at college campuses and film festivals across the US and around the world. Like that other cult classic, ROCKY HORROR PICTURE SHOW, many people who go to see THE ROOM, which usually takes place at a midnight screening, dress up like characters in the film, throw plastic spoons at the screen and toss footballs to each other on cue. (Once you see THE ROOM, it will all make sense.)

THE DISASTER ARTIST stars and is directed by James Franco (WHY HIM?; THE INTERVIEW) who puts in his best performance since 127 HOURS. Here he plays Wiseau, and he nails the man’s quirky mannerisms and curious accent. If you don’t believe me, you’ll have to watch the film and wait for the pre-credits sequence where recreated scenes from THE ROOM starring Franco and the others in his cast are shown side by side with the originals. They are so spot on that one hopes they recreated the whole film and not just a half a dozen scenes. Franco’s younger brother Dave (NOW YOU SEE ME) plays Sestero, who meets Wiseau in an acting class in San Francisco in 1998 and is immediately drawn to Wiseau’s passion. The two men form a bond and decide to move to Los Angeles to try their luck there. Sestero was 19 years old at the time, and although Wiseau said he was about the same age, it’s obvious to everyone including Sestero that he’s much older. To this day, Wiseau has never revealed his true age. He’s also been loath to reveal anything else about his past including his birth name. He always said that he came from New Orleans but his accent belies him. In a recent interview with Jimmy Kimmel though, Wiseau said he was born in Europe but lived for a time in Louisiana. Franco, who was sitting next to him, was visibly surprised. He said that this was the first time he had heard that admission. Also shrouded in mystery is where Wiseau’s money comes from. He financed the making of THE ROOM singlehandedly to the tune of US$6 million, owned apartments in both San Francisco and Los Angeles, and drove a fairly new Mercedes-Benz sedan. Wiseau has said from time to time that he made his money selling irregular-sized jeans and investing in real estate, but the general belief is that his wealth is inherited. Watching him and listening to him speak, one has the impression that his father was an eccentric count from Transylvania.

THE DISASTER ARTIST was produced by Seth Rogen, who also stars as Sandy Schklair, THE ROOM’s script supervisor. (The real Schklair has been pushing for a directing credit on THE ROOM as of late.) Other friends of Rogen and Franco also take part including Dave Franco’s wife, Alison Brie (A FAMILY MAN), who plays Sestero’s girlfriend, Amber. Ari Graynor (WIENER-DOG) plays Juliette Danielle, who plays “Lisa” in THE ROOM. Britney Spears was rumoured to be considered for the role, which is not surprising considering how much she looks like Danielle. Graynor, however, is great. Zac Efron, Judd Apatow, Melanie Griffith, Bob Odenkirk and Sharon Stone all have cameo roles, but it’s Bryan Cranston who has the ultimate cameo appearance. He plays himself!

(James) Franco has already received a number of accolades but for his portrayal of Wiseau and for his direction and rightly so. It’s a wonderful film that will have you laughing in disbelief, unless, of course, you’ve already seen THE ROOM, in which case you’ll be laughing because it gets this story 99.9 percent right (according to Wiseau). Franco may soon find himself with another Oscar nomination or even two. We’ll find out in a few weeks’ time.

Definitely go see THE DISASTER ARTIST and if you haven’t seen THE ROOM yet, check that out too. The latter is on limited engagement at the Broadway Cinematheque starting on January 13th. It’s like watching a train wreck happen. You know you should be looking away but it’s so perversely fascinating, you won’t be able to avert your eyes.

A bit of trivia: In THE DISASTER ARTIST, when Tommy and Greg arrive in LA, the camera pans around showing Bel Air and some typical Hollywood street scenes. One of them is of a blonde behind a hand-held fan sitting in a pink Camaro. The real woman (not the actress who plays her) is called Angelyne and she’s my cousin.

Watch the review recorded on Facebook Live in RTHK Radio 4’s studio on Thursday, January 11th at 8:30 am HK time!