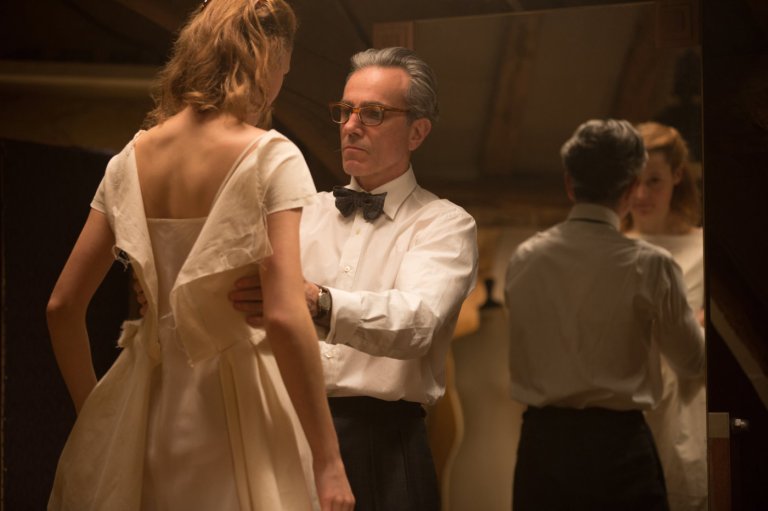 The 2017 movie year officially came to an end earlier this week with the 90th Oscar Awards®. There weren’t many surprises at this year’s ceremony, which is probably a good thing given the state of affairs in Hollywood these days. Perhaps the least surprising win (outside of the four acting awards) came in the category of Costume Design. The Oscar went to the film, PHANTOM THREAD, a story about a dress designer. That’s not to say that the award wasn’t deserved. The costumes were exquisite but this one was a “gimme”. Less surprising was that the Best Actor Oscar did not go to the film’s star, three-time Oscar winner Daniel Day-Lewis (LINCOLN; THERE WILL BE BLOOD), who had previously announced that he was retiring from acting in movies. His performance was very good, as it always is with him, but it was not Oscar-worthy.

Written and directed by Paul Thomas Anderson (THERE WILL BE BLOOD; BOOGIE NIGHTS), PHANTOM THREAD is a period drama set in London in the 1950s. Day-Lewis plays the wonderfully-named Reynolds Woodcock, who is a couturier to Europe’s elite. His sister, Cyril (Lesley Manville, star of the British TV series MUM and ex-wife of recent Oscar winner Gary Oldman), is the business’ manager but she also manages her brother’s life, dispatching his lady friends when he tires of them. And tires he does. Reynolds is extremely fastidious to the point where even noisily buttering one’s toast at the breakfast table sends him into a tirade of verbal abuse.

After Cyril sends his latest woman packing, Reynolds heads to their country home in the Cotswolds to clear his head. There, he meets waitress Alma (Luxembourgish actress and young Meryl Streep lookalike, Vicky Krieps). They immediately hit it off and before long she has moved into his and Cyril’s home/atelier in London, becoming his muse, model and able business assistant. Of course, Cyril is not pleased because she’s seen this so many times before but she and Alma quickly develop an understanding of their respective roles in Reynolds’ life. For her part, Alma is no slouch. Not only can she take Reynolds’ abuse full on, she can dish it right back at him. After having so many women before her, Reynolds may just have met his match with Alma.

PHANTOM THREAD is certainly a curious film. The performances are all excellent and, of course, the costumes are beautiful but the three principal characters are all nasty people. It is very hard to find anything likeable about any of them. That makes this movie a challenge for most people to watch. Certainly, critics are appreciating this film more than audiences are. Though billed as a romantic drama, the story also includes some Hitchcockian suspense (is it just a coincidence that Alfred Hitchcock’s wife and collaborator was also named Alma?), a wicked dose of dark humour and even a ghost, as Reynolds, Cyril and Alma all jockey for position. If you accept that at its core the film is about seduction, power and control, then you might just enjoy it.

Watch the review recorded on Facebook Live in RTHK Radio 4’s studio on Thursday, March 8th at 8:30 am HK time!