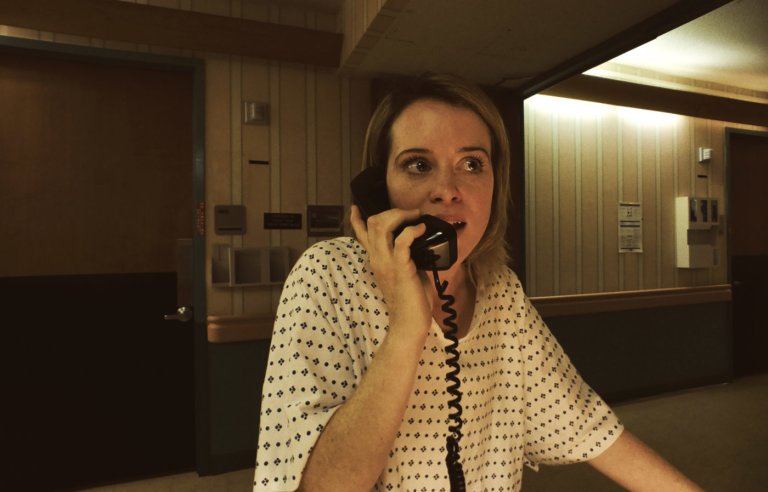 Steven Soderbergh (LOGAN LUCKY) is known for his indie, edgie films and TV series (shame that THE KNICK only lasted two seasons), so few eyebrows were raised when it was announced last July that he secretly made a film shot entirely on an iPhone 7 Plus. It’s what we would expect from him. But he certainly wasn’t the first filmmaker to shoot a film on a smartphone. Teenagers all over the world have been doing that for quite a few years now. There’s even at least one film festival dedicated to that format. He also wasn’t the first well-known filmmaker to do it. That honour belongs to Sean Baker, who shot his 2015 film, TANGERINE, using three iPhone 5s. Nevertheless, the film, UNSANE, did manage to garner quite a bit of interest prior to its world premiere at the Berlinale last month. Unfortunately, what came after was very mixed.

UNSANE has now come to Hong Kong, one day before its general release in the US and the UK. The film stars British actress Claire Foy (BREATHE; TV’s THE CROWN), who puts on a fairly good American accent though not a very convincing Bostonian one. (She needed to take dialect coaching from the Afflecks or Mark Wallberg.) She plays the interestingly named Sawyer Valentini, a no-nonsense data analyst. Sawyer, we quickly find out, was the victim of a stalker in Boston and, after slapping the guy, David Strine (Joshua Leonard, THE BLAIR WITCH PROJECT), with a restraining order, and shutting down her Facebook and email accounts, she relocated to Pennsylvania to start afresh. David, however, has found her there, or so she thinks. Worried that she can’t get past this, she seeks counselling from a psychologist at the nearby Highland Creek Behavioral Center. The session seems to go well for Sawyer and the counsellor asks her to sign some perfunctory paperwork before she leaves, which she does. What Sawyer doesn’t realise, though, is that she has unwittingly committed herself to the centre for observation for 24 hours, which quickly balloons to seven days as she bumps up against the staff and the other patients. To add to her distress, Sawyer believes that her stalker is posing as one of the orderlies. Is Sawyer going insane or is this all an elaborate plot by David to finally have her near him?

Soderbergh seems to have created his own spin on B-movie thrillers with this film and, for the first half, at any rate, it works fairly well. His use of the smartphone is aptly suited for the plenty of closeups he takes of Foy’s face as Sawyer wrestles with her inner demons. What doesn’t work so well is the script (also by him), which runs out of steam in the third act and not only gives too much away far too early but also relies on well-worn tropes from this genre. Yes, there are dark and creepy moments but not enough of them. (There are humorous moments too, which are good.) I would have preferred to have a story worthy of a classic episode from TV’s THE TWILIGHT ZONE but it never reaches that level of rich psychodrama, and we don’t get as invested in Sawyer’s condition as we need to be to make this film a winner. The glaring plot holes, particularly a few involving Nate Hoffman (SNL alumnus Jay Pharoah), another patient at the facility, don’t help either.

That being said, UNSANE is not a bad film. It’s a C+ B-movie at best, and one that’s not up to the level of edginess that we expect from this filmmaker.

Watch the review recorded on Facebook Live in RTHK Radio 4’s studio on Thursday, March 22nd at 8:30 am HK time!