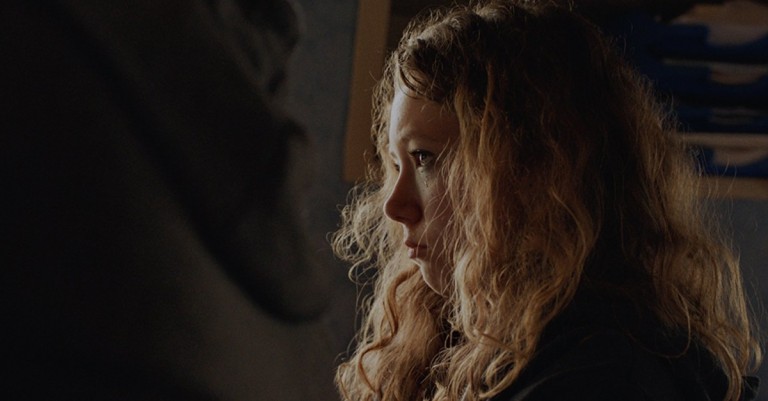 Back in 2010, a teenaged girl in Bosnia was filmed throwing live puppies into a fast-flowing river. The video, which was shot by her older brother and uploaded onto his YouTube page, quickly went viral and sparked outrage around the world. It was reported at the time that even TRANSFORMERS director Michael Bey offered a US$50,000 reward for information leading to the arrest and successful prosecution of the girl. This incident has been moved to the Netherlands and adapted into the provocatively named film, FIND THIS DUMB LITTLE BITCH AND THROW HER INTO A RIVER, by award-winning Dutch director Ben Brand in his debut commercial feature.

Fifteen-year-old Remco (Nino den Brave) lives with his widowed father, Wim (Belgian actor Wim Opbrouck), and younger sister, Lizzy (Senna Fokke), somewhere in the Netherlands’ industrial heartland. Wim runs an illicit business selling puppies imported from Germany and the kids actively take part, vaccinating and feeding the dogs, helping photograph them and even disposing of the ones that are too sick to sell online. As helpful as Remco and Lizzy are, this isn’t what they want to do for the rest of their lives. Lizzy wants to be a famous singer, and she auditions for the Dutch equivalent of American Idol. Remco wants to be popular too, but his sphere of influence for the time being is limited to his group of friends who are all a bit older than he is. One day, when he notices that one of those friends has posted a video online that has received quite a few views, he decides to film Lizzy tossing the sick puppies into the river and upload it onto his page. At first, it’s very exciting as his friends all think the video is “sick”, as in they’re impressed with his badness, but when the video goes viral and it unleashes a storm of indignation from netizens around the world, Remco realises that he may have put Lizzy’s life in danger. By then, though, it’s too late as mob mentality has kicked in and it seems that now everyone including Michael Bey wants to find that “dumb little bitch and throw her into a river”.

In this age of Internet stars where people like “PewDiePie”, brothers Logan and Jake Paul, and even a 6-year-old toy maven named Ryan each earn in excess of US$10 million a year from their YouTube channels, the lure to become like them can seem very attractive to many young people. Brand tells this story from Remco’s perspective, humanizing both him and Lizzy, and portraying them as typical teens who want fame, recognition and acceptance but don’t understand early enough the consequences or the responsibilities that come with getting those things. Parents of teens who will see this film may point a finger directly at Wim and his poor parenting skills but even so-called “good parents” have kids who have posted things online that they probably shouldn’t have. Certainly, with the Tweeter-in-Chief’s re-tweeting of provocative and fallacious videos and his near-daily name calling, the line between what is acceptable online and what is not has become very blurred. Perhaps today a video of a young girl throwing live animals into a river wouldn’t generate such pique as it did eight years ago.

FIND THIS DUMB LITTLE BITCH AND THROW HER INTO A RIVER can be slow-going (the film seems much longer than its 87-minute running time), story arcs get dumped, and the handheld camerawork, much of it in the film’s opening scenes, can be annoying (yes, I get why the director made that choice) but the performances are good, particularly that of den Brave. Both he and the director are still young and early in their careers, and I look forward to seeing more of their film work in the future.

FIND THIS DUMB LITTLE BITCH AND THROW HER INTO A RIVER is the opening film of this year’s Dutch Film Festival. In all, five films will be screened twice each from April 16 – 22 at the Grand Cinema at Elements. For more information, please visit http://www.thegrandcinema.com.hk.

Watch the review recorded on Facebook Live in RTHK Radio 4’s studio on Thursday, April 12th at 8:30 am HK time!