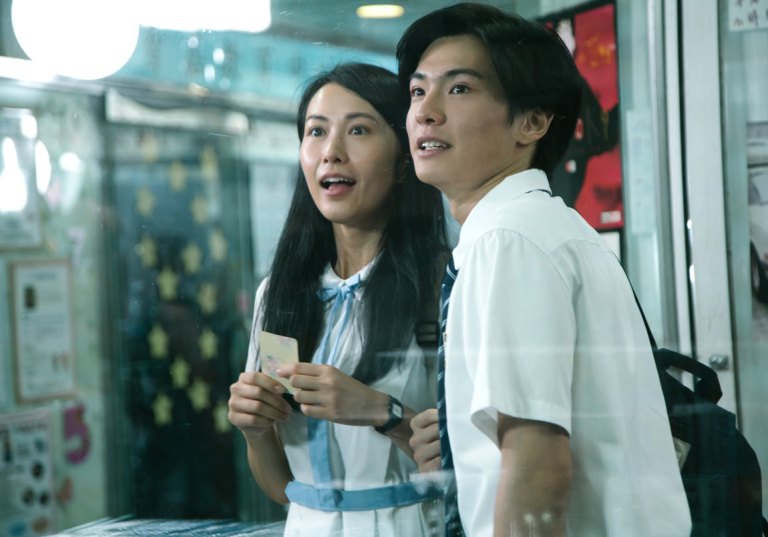 Not to be confused with WHEN HARRY MET SALLY, a book about two Urdu poets or even the lake where the Taiwanese like to spend their honeymoons, WHEN SUN MEETS MOON tells the story of two celestially-crossed teenage lovers who share an interest in astronomy.

It’s 1992 and a heavy rainstorm has caused a massive blackout across Hong Kong. Rather than sitting at home, two high school students, Moon and Sun (it sounds less ridiculous than you think considering we have kids here named Lemon and Smurf), separately head to a hilltop overlooking the sea and meet while stargazing there. Moon, who lives in a dilapidated housing estate with her single, taxi-driving mother, has a passion for writing illustrated stories. She sees Sun as her model for the daring knight who protects the fair maiden from the dragon. For his part, Sun is just a misunderstood, rich boy who lives with his single father in an upscale flat in Tai Tam. Because Sun is so headstrong, his father plans to move them to America in a year’s time. Until that happens, though, he decides to ship Sun off to a boarding school in Stanley where he’ll hopefully learn some discipline.

Separated, the pair begins writing letters to each other (it’s that prehistoric time before mobile phones and texting), using Moon’s kind uncle who seems to own Hong Kong’s only stationery shop and Sun’s school’s caretaker as the intermediaries. Just as the sun and the moon rarely appear together in the sky, Sun and Moon have to negotiate both their physical separation as well as the opposition to their relationship that comes from their parental authorities.

I have been on record numerous times saying how much I dislike most of the films that are made here but this one takes it to a whole new level. One of my beefs is that these films – and many Japanese and Korean films are just as bad in this regard – often star actors who are a good ten years older than the characters they play. Here, the actress who plays Moon, Kathy Yuen/Tong Yee/湯怡, is 30 years old. At least her co-star, Daichi Harashima/原島大地, is 20 years old but neither looks the required 17 or 18. It’s even worse when we see Moon in the story’s bookends. She’s just published her first illustrated book and guess what – or guess who – it’s about. She looks exactly the same but I think we’re supposed to assume it’s now ten or more years later.

The writing is just as grating. In one scene towards the end of the film, Sun tells Moon that he loves her yet he hasn’t so much as planted a kiss on her lips. Sure, some kids in Hong Kong are very naïve socially, or they would have been back in 1992, but that’s bordering on the ridiculous. At that point, a kiss – even a bad kiss – was necessary to make his words believable. And don’t get me started on the subplot involving Sun’s teacher. Sun gives her advice about matters of the heart. I just wanted to reach through the screen and smack some sense into both of them.

Finally, and this is a huge one, is the English subtitles. Even movies that were made in 1992 had better English translation than this one does. Has writer-director Benny Lau/劉偉恆 never heard of Google Translate? Sure, it’s far from perfect especially when it comes to Chinese but it would have been better than the dodgy translation software from Shenzhen that he probably used. It was so bad that I resorted to reading the Chinese subtitles so that I could understand what the characters were saying.

WHEN SUN MEETS MOON is just a badly produced, badly written and badly directed silly film. If you’ve given yourself a ridiculous English name like Paper or Snowy and you like a bit of coffee with your sugar, then this film is for you.

Watch the review recorded on Facebook Live in RTHK Radio 4’s studio on Thursday, May 24th at 8:30 am HK time!

One thought on “Movie Review: When Sun Meets Moon (某日某月)”