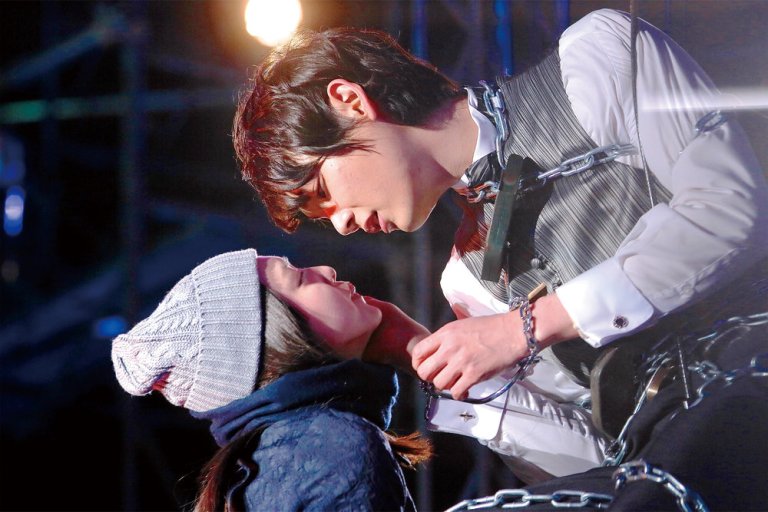 Everyone has a doppelganger somewhere. Although many people – particularly in China – have said that I look like Nicolas Cage (I’ve even signed his autograph more than a few times), I’ve met my real doppelganger. When I was in high school, I was often mistaken for a kid who went to another high school not too far away. It happened to me so often that I learned his name and that he was a year ahead of me. It wasn’t until about ten years later that I met him by chance. It turned out we had a mutual friend who, by the way, never thought we looked alike until I mentioned it to her. Having finally met him, I have to say that he looked like he could have been my brother, though he didn’t see the resemblance at all. In any case, contrary to what South Korean writer/director Kwak Jae-Young (곽재용) puts forth in his film, COLORS OF WIND, neither of us died from the experience of meeting each other.

In the film, Ryo (Yuki Furukawa/古川雄輝) is a 20-something year old factory worker in Tokyo. He has just woken up from a 100-day funk following the disappearance of his girlfriend, Yuri (Takemi Fujii, 藤井武美). While he was out of it, his favourite restaurant closed down but, it seems, Ryo had left an old briefcase there one hundred days earlier with instructions to the restaurant owner to give it to him when he returns. He also told the restaurant owner that he probably wouldn’t remember leaving it with him and that’s the case when the premises’ new owner gives it to him. Inside are some photographs of Yuri and some landmarks of somewhere in Japan, Yuri’s diary, a latchkey and a few other things that he doesn’t recollect ever having. The owner tells Ryo that the new establishment is a magic-themed bar and Ryo is intrigued, particularly when a mysterious magician shows up and does a trick on Ryo that seems supernatural.

Ryo reads Yuri’s diary and feels that he can find some answers to her disappearance up in Hokkaido so he travels there. Before he gets there though, the train makes an unscheduled stop at a small town where a festival is taking place. Ryo checks it out and bumps into Aya, Yuri’s doppelganger. She’s so happy to see Ryo because he’s the doppelganger of her old boyfriend, magician Ryu, who disappeared a few years earlier while doing a magic stunt. As Ryo gets to know Aya better, he realises that she is Yuri though she may not realise it herself. Meanwhile, he starts getting into magic and becomes very successful at it, ultimately deciding to recreate Ryu’s fateful stunt.

If Yuri had to die to become Aya, does that mean that Ryu died and became Ryo? Or did Aya die and become Yuri, and Ryo died during those 100 days and become Ryu? Or is Ryu still alive somewhere? And what about Yuri’s autistic brother Ryoma – what’s his connection here? If this all sounds confusing, welcome to the club! I was hanging on for dear life just trying to keep up with this story. Perhaps that doesn’t matter if you’re a certain demographic. Young women in particular are bawling their eyes out over this moody melodrama. I’ll grant that Hokkaido looks beautiful even in March and if it weren’t so cold, I’d get on that tour boat that goes out on the ice floes in the Sea of Okhotsk, but this film is really for hard core romantics, which I am not.

Fujii is fine as Yuri/Aya but Furukawa’s success as an actor is a complete headscratcher. He’s as dull as they come. It also doesn’t help that he looks about 15 even though he’s almost 30. His baby face makes it hard to take him seriously either as a mysterious magician with a cheesy moustache or as a lover.

Director Kwak has included a few retro scenes that, given who would be attracted to this film, may escape their notice. Beatles fans, however, would recognise his homage to the cover of “Abbey Road” and fans of Luc Besson’s 1994 film, LEON, THE PROFESSIONAL, would get the reference to Ryo and Yuri/Aya dressing up as and calling themselves Leon and Mathilda. Both are nice touches but rather self-indulgent.

The film’s climax could have gone in either of two directions. I was hoping it would go in the other direction and, if it had, it would have been a good story. But I don’t think “story” matters to the young girls, hankies ready, who are going to be seeing this film.

You have been warned!

Listen to the review recorded in RTHK Radio 4’s studio on Thursday, June 28th at 8:30 am HK time!