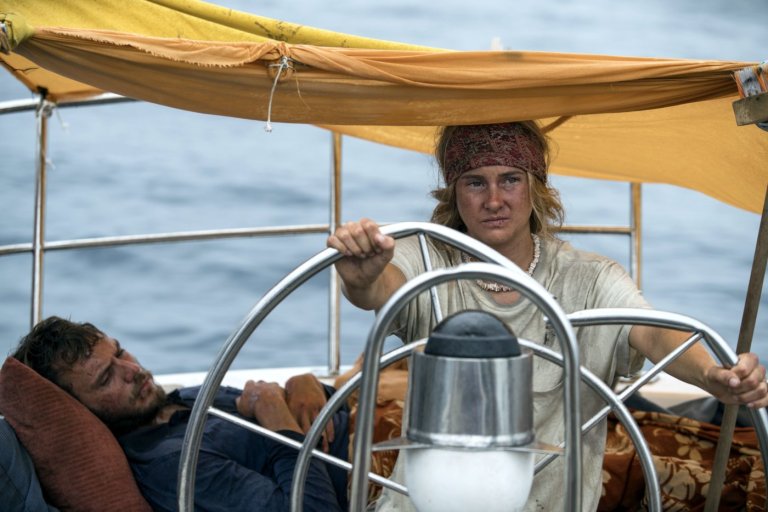 Icelandic filmmaker Baltasar Kormákur (THE DEEP) returns to the ocean in this story of survival against all odds based on Tami Oldham Ashcraft’s memoir, Red Sky in Mourning. If you don’t know her story, do not, I repeat, DO NOT, google or Wikipedia it before you go see the film because, if you do, it will ruin the film for you. The film relies on a certain narrative structure that will be spoiled if you know too much going into the cinema.

It’s 1983 and Tami Oldham (Shailene Woodley, THE FAULT IN OUR STARS; THE SPECTACULAR NOW) is quite the free spirit. The 23-year-old San Diegan has been travelling around the world and her journey has taken her to Tahiti where she finds work sprucing up boats at a marina there. One day she meets Briton Richard Sharp (Sam Claflin, ME BEFORE YOU; THEIR FINEST), who is also travelling the world on his sailboat. The pair hit it off right away and when some friends of Richard ask him to sail their boat 6,500 kilometers to San Diego for them (for a nice fee), Richard asks Tami to join him. Initially, Tami isn’t sure she’s ready to go home but in the end she agrees. Their journey starts off well but it’s not long before they run headlong into Hurricane Raymond, a Category 4 storm (though in the film it’s rated as a 5), which disables the boat and leaves Richard severely injured. Stuck on the open water in the middle of nowhere, Tami has to rely on everything she’s learned about sailing and survival to make sure they live long enough to either reach land or be rescued by a passing cargo ship.

There are obvious comparisons to the 2013 film ALL IS LOST starring Robert Redford, although this story is true and that one is fiction. ALL IS LOST, however, is a much better film because it’s more harrowing. (If you haven’t seen it, I highly recommend it.) In that film, director J.C. Chandor (A MOST VIOLENT YEAR) keeps his shots very tight. The focus is strictly on the unnamed sailor (Redford’s character) and there is very little dialogue. (Apparently, the whole screenplay is just 32 pages long.) In ADRIFT, the gargantuan waves (CGI, of course) are impressive but the film’s focus here is on Tami and Richard’s relationship as told in flashback. Unfortunately, Richard, or perhaps it’s Claflin, is not that interesting a character and we don’t (at least I didn’t) care whether he or Tami lives or dies. The other problem with ADRIFT is that no much happens out on the open water. Granted, probably not much did happen out there once the boat was disabled, but it doesn’t make for very gripping cinema. I was hoping for a few sharks to show up and stir things up a bit but that didn’t happen.

I’m a Shailene Woodley fan but she’s no Robert Redford. She’s not a compelling enough actor to hold up a film like this on her own. It may have been the screenplay with its back-and-forth time shifts. It doesn’t allow the viewer to hold onto the experience of trying to get out of a completely hopeless situation.

I would have liked this to be a better film than it is. If you have nothing else to watch, or if you’re up at 2 am on a long-haul flight, then check it out. It’s okay but ALL IS LOST is a more interesting film.

Watch the review recorded on Facebook Live in RTHK Radio 4’s studio on Thursday, September 6th at 8:30 am HK time!