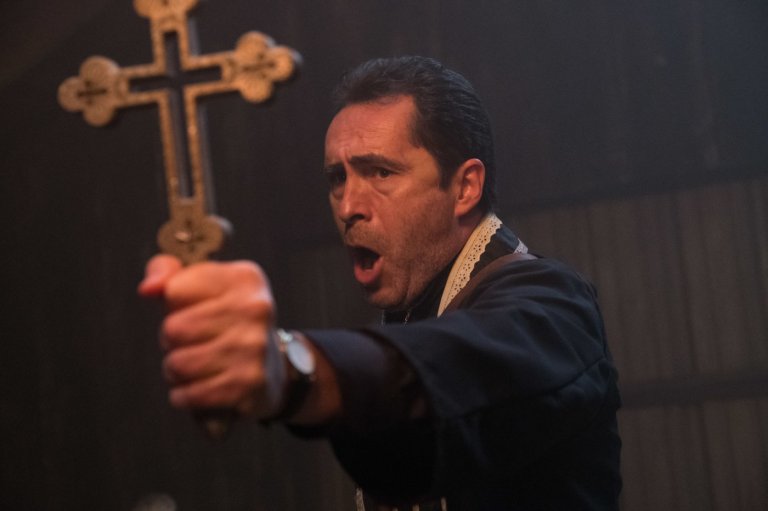 Welcome to the Conjuring Universe. Yes, now THE CONJURING films (THE CONJURING and THE CONJURING 2) and THE ANNABELLE films (ANNABELLE and ANNABELLE CREATION) have their own universe. And why not? The four films have made over US$1.2 billion off a combined production budget of just US$84 million for Warner Bros. That’s serious cash any which way you look at it so it’s hardly surprising that producers James Wan and Peter Safran have turned back the clock to 1952 and gone into the origin story of the nun character from the second THE CONJURING film, and shifted the setting from the London suburb of Enfield to a spooky monastery in Romania.

It’s at that monastery where two Roman Catholic nuns who live there are attacked by an unseen force when they enter a tunnel to retrieve an ancient Catholic relic. One nun gets dragged away into the abyss and the other one decides to take her own life. She’s discovered by Frenchie (Belgian actor Jonas Bloquet), a young French-Canadian who has made his home in the nearby village and has the responsibility of delivering supplies to the nuns. Word of the nun’s suicide reaches the Vatican and Father Burke (Mexican actor Demián Bichir, THE HATEFUL EIGHT) is called in to go there to investigate. Father Burke, we learn, is a sort-of exorcist although one case he had, a young boy named Daniel, didn’t quite work out as well as he had hoped. He’s also told that a young novitiate, Sister Irene (Taissa Farmiga, TV’s AMERICAN HORROR STORY), will accompany him to Romania.

No sooner does the pair arrive at the monastery then they are exposed to strange goings on that only build and get creepier as they get closer to understanding what is going on there. The film reaches a climax when, literally, the doorway to hell breaks loose.

Before I see a film, I try not to know anything about it but this one seemed to invade my consciousness a few days before I saw it. I had heard that it was trashy – not horribly trashy but trashy nevertheless. I’m happy to report that it did not disappoint in that regard. It’s pretty trashy but it is watchable. The film starts off well as we get to know the three principal characters better and it seems not too dissimilar to THE EXORCIST, which is fine. But then it just heads for the dumper and keeps going down, down, down. The film is pretty much 96 minutes of jump-scare after jump-scare with ridiculous dialogue and absurd situations… but then aren’t most trashy horror films full of jump-scares, ridiculous dialogue and absurd situations? There was a possibility for this film to be really good with the priest and the nun having interesting backstories and experiences that should have held them well at the monastery. For much of the movie though, Sister Irene looks wide-eyed and screams an awful lot. I can almost forgive her because she’s young and hasn’t come across too many demons in her time but I can’t forgive Father Burke. He is an exorcist who’s seen it all before. He should be a pro at confronting demonic spirits. Sadly, he’s no Father Merrin (Max von Sydow’s character in THE EXORCIST, in case you forgot). I can also complain that Frenchie definitely does not have a Québécois accent and the village people shouldn’t be able to speak English much less be able to converse with Frenchie but that’s low hanging fruit.

Critics are widely panning this film while audiences are being ever so slightly more appreciative. Even so, the film is doing incredibly well at the box office, already taking in over US$230 million off a production budget of US$22 million. That means THE NUN 2 will be coming. Certainly, the movie ends in such a way that you know that the story outline for the sequel has already been written. Interestingly, Taissa Farmiga is the kid sister of Vera Farmiga, who starred in the two CONJURING films. She also appears very briefly in this film too. Perhaps Wan and Safran plan to connect their two characters in the next film to bring the franchise full circle. I’m sure we’ll find out soon enough.

If you’re into trashy horror films and/or the Conjuring Universe, go see this film. Even if you haven’t seen the other films in the series, you’ll be fine with this one. You don’t need to be a rocket scientist or an exorcist to follow the story. However, if this genre isn’t your bag, you can safely give it a miss and sleep peacefully at night.

Watch the review recorded on Facebook Live in RTHK Radio 4’s studio on Thursday, September 20th at 8:30 am HK time!

3 thoughts on “Movie Review: The Nun”