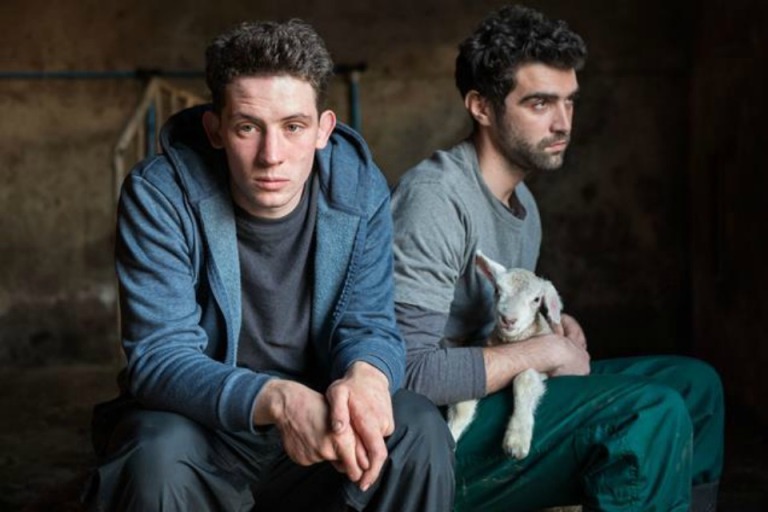 I’ve said many times that when it comes to screenwriting, less is more. All too often, especially with relatively inexperienced screenwriters, we’re either given too much information about the characters and/or the story rambles on with no clear direction. When I used to watch over 200 films a year for a film festival I ran, I would see so many awful 60-minute films that would make fantastic 6-minute films if only the director, who was often the screenwriter, would take some scissors to his or her work. We don’t need to know everything there is to know about a character when we watch a film. We just need to believe that his/her current motivations make sense given what we do know. Happily, I can say that British actor Francis Lee got it right in his first time directing a feature film.

In G-D’S OWN COUNTRY (in case you’re new to my website, I hyphenate that word for religious reasons), Johnny Saxby (Josh O’Connor, FLORENCE FOSTER JENKINS; TV’s THE CROWN’s next Prince Charles) is a failure and he knows it. While all his contemporaries seem to have gone off to university or have found good jobs, Johnny is stuck at home, tending to the cows and sheep on the family farm in West Yorkshire, listening to his disabled father, Martin (character actor Ian Hart), berate him on a regular basis while his grandmother, Deirdre (Gemma Jones, the BRIDGET JONES trilogy), adds her own disapproving tsks and sighs with similar frequency. To cope, Johnny heads into town every night where he gets himself blindingly drunk to the point where his face is a regular visitor to the toilet bowl at home. He also looks for young men so he can have some soulless sex to relieve his self-loathing. After a calf arrives stillborn due to Johnny’s neglect, Martin decides to hire Gheorghe (Alec Secareanu), a Romanian immigrant, to help Johnny during lambing season. Johnny doesn’t take too well to having Gheorghe there but the Romanian isn’t about to be pushed around by the likes of this loser. Out on the windswept moors – if you have images of Wuthering Heights in your head, you should know that the Brontë sisters grew up just down the road in Haworth – Gheorghe quickly proves his worth when he delivers a runt lamb and shows Johnny how to keep the tender animal alive. He also teaches Johnny a thing or two about caring and loving, neither of which Johnny has any experience in. His relationship with Gheorghe leads Johnny to make some decisions that will change his relationship to his family.

Many pundits have called this film “Yorkshire Brokeback Mountain”, and the director does pay homage to that groundbreaking film in one scene, but G-D’S OWN COUNTRY is quite different because of where most of us are today with homosexual relationships. In BROKEBACK MOUNTAIN, Jack and Ennis kept their relationship a secret because it was the 1960s and ’70s and they knew how people would react if they knew. In G-D’S OWN COUNTRY, although no one, including Johnny, acknowledges that he’s gay, everyone around him knows that he is and most of them don’t care.

Lee has clearly thought long and hard about these characters’ back stories but he keeps it to himself, revealing only enough when we need it. This makes for a very compelling story to watch. The performances, too, are all top-notch in their restraint, offering a poetic harmony to the location. It’s not surprising that Lee got it so right as he grew up in the area and knows these characters well.

If you’re going to see a film this week, this is the one you should choose. It’s understated and there are more quiet moments than dialogue but it’s a story that will stick with you long after you leave the cinema. It’s the kind of film that you almost hope will have a sequel in about ten years’ time so you can see what became of everyone.

Watch the review recorded on Facebook Live in RTHK Radio 4’s studio on Thursday, September 27th at 8:30 am HK time!