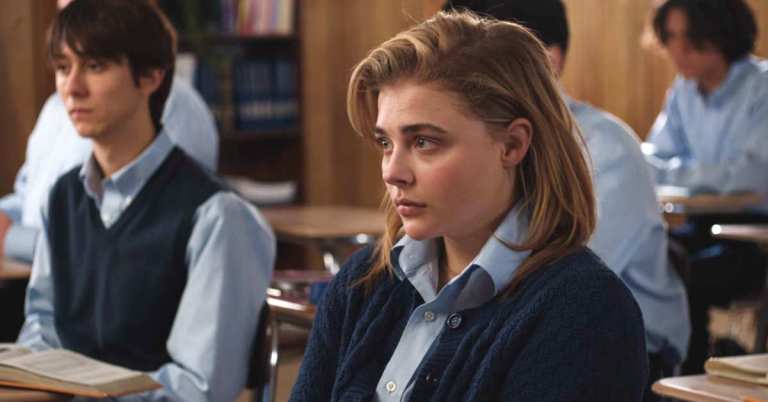 I would like to think that humankind has become so enlightened in 2018 that we can now acknowledge that gay conversion therapy doesn’t work but, unfortunately, the practice still exists today. One organisation in Hong Kong, and I won’t mention its name because it doesn’t deserve any undue publicity, is not only still running, its services are often recommended by government social workers to families of gay teens. Twenty-five years ago though, these organisations were very popular in the US and elsewhere, often affiliated with evangelical churches that see homosexuality as an abomination that can be “cured”.

In the indie film, THE MISEDUCATION OF CAMERON POST, it’s 1993 and Cameron (Chloë Grace Moretz, CLOUDS OF SILS MARIA) is a Grade 10 student living somewhere in the US. At her junior prom, she gets caught making out with the prom queen in the back of her boyfriend’s car. The two girls have been together for a while, we learn, but have kept their relationship under wraps. Now outed, Cameron gets sent by her family to G-d’s Promise, a conversion therapy camp where the centre’s leader, Reverend Rick (John Gallagher Jr., SHORT TERM 12), and his no-nonsense sister, Dr. Lydia Marsh (Jennifer Ehle, I KILL GIANTS; A QUIET PASSION), attempt to cure Cameron and other teenage “disciples” of their misplaced urges by messing with their heads.

Based on the 2012 coming-of-age teen novel of the same name by Emily M. Danforth, THE MISEDUCATION OF CAMERON POST received a lot of press at the beginning of the year when it won the Grand Jury Prize at the Sundance Film Festival. It’s now snuck into Hong Kong receiving zero marketing support from its local distributor and playing sporadically in just three cinemas. (After living in Hong Kong for many years, I’m still at a loss to understand why so many films that come here don’t get any support from their distributors. Why bother bringing them then?) The film boasts fine performances and a well-crafted sense of place and time. Unfortunately, the story, co-written by director Desiree Akhavan (APPROPRIATE BEHAVIOR), lacks the passion that is needed to build emotional connections between the audience and the characters. A few subplots offer hints of sparks but they don’t go anywhere. In one, the happy-clappy reverend reveals to Cameron that he himself is a “reformed” gay man as he relates his story to her but all she does it laugh it off with her pals. It would have been better if, perhaps, she found him having a moment of “relapse” and then the two would have to work out what to do about it. There is one character who does have a relapse but all is forgotten by the next morning. Even more disappointing is the film’s climax involving another disciple who accepts that he can’t live the lie anymore and takes matters into his own hands. Here, we only learn what happens to him when Reverend Rick tells Cameron. By moving this pivotal event off-screen, the director denies the audience the opportunity to empathise with the teens’ psychological struggle.

If these camps didn’t still exist today, I’d say to wait for this film to come to the small screen. The reality, however, is that camps like G-d’s Promise get very vocal support from people in high political positions. Sadly, if the director was trying to make a point about their insidiousness, she could have hit harder.

Watch the review recorded on Facebook Live in RTHK Radio 4’s studio on Thursday, October 25th at 8:30 am HK time!

4 thoughts on “Movie Review: The Miseducation of Cameron Post”