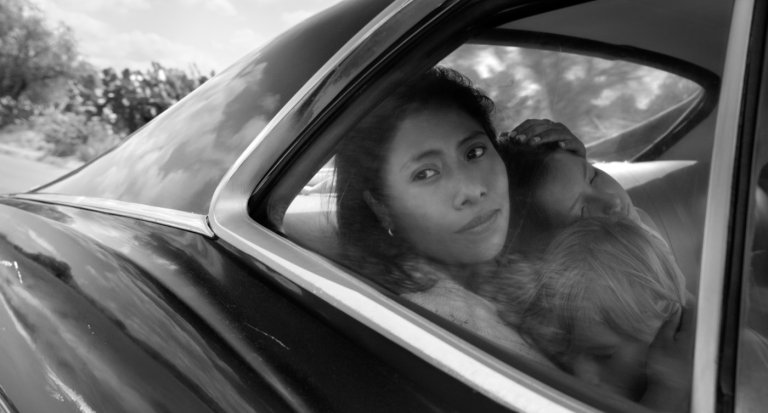 Alfonso Cuarón has already proven that he knows how to make a great film. He’s the guy who made the Hollywood blockbusters HARRY POTTER AND THE PRISONER OF AZKABAN and GRAVITY (the latter film earned him an Oscar, the first for a Mexican director), as well as a couple other highly acclaimed films like Y TU MAMA TAMBIEN and CHILDREN OF MEN. With his latest film, ROMA, he reaches new heights by turning the camera inward to present a neorealist, semi-autobiographical memory piece inspired by his own experiences growing up in Mexico City in the 1970s.

This story begins in late 1970 and revolves around Cléo (newcomer Yalitza Aparicio), who is one of two live-in domestic helpers to an upper-middle class family in Mexico City’s Roma district. Hongkongers will find Cléo’s daily responsibilities very similar to those of the domestic helpers who live and work here. Up at the crack of dawn, Cléo is involved in every aspect of keeping her employers’ family unit functioning like a well-oiled machine, from washing down the tile floor in the carport which doubles as the family dog’s toilet, waking up and putting to bed the family’s four young children, doing the laundry (by hand, no less!), cleaning the house and more. Her reward, after serving the family dinner, is to be able to spend a few seconds sitting down with them in front of the TV. Her day ends once the family is safely tucked in bed and the cycle repeats the next day. But Cléo never complains. The young indígena goes about her work never smiling but never angry or resentful either. This is her life. She even manages to carve out some time to have a relationship with Fermín, a martial arts enthusiast, but he scampers off as soon as he hears that Cléo may be pregnant. Just as Cléo’s world is about to change, so too are Mexico’s and Cléo’s “family’s”. Outside the gates of their home, student unrest is bubbling to the surface while inside, Antonio (Fernando Grediaga) has packed his bags for another woman, leaving his wife Sofia (Marina de Tavira) to not only decide what and when to tell the children but to financially provide for them too. Deadbeat dads seem to be the norm here. The women, though, are strong — even stronger than they know.

Cuarón constructs a finely-detailed landscape of life in this corner of Mexico City (right down to the knife-sharpening man who walks the neighbourhood’s streets each day calling out for business to the marching band to the men who stand on the pavement in front of the cinema hawking toys) at that time where the intersection between the haves and the have nots is superficial at best. As much as Cléo is a part of this affluent family, she’ll always be the outsider; the employee. The kids love her and she loves them but her life will never be different. It’s through her eyes that we see both her life and his childhood (Cuarón is represented by the family’s youngest, 6-year-old Pepe) and that’s what makes this story so powerful.

Although the film is available now on Netflix, you may have heard people say to watch it on the big screen instead. I’ve now seen it both ways (big screen first) and I can tell you that I wholeheartedly agree. Cuarón shot the film himself (because his long-time collaborator, cinematographer Emmanuel “Chivo” Lubezki, wasn’t available) on 65mm using an Alexa65 digital camera with state-of-the-art Dolby Atmos technology. Not only was ROMA meant to be seen on a big screen, it deserves to be seen that way. In the cinema, the sound comes from all around. In one scene between Cléo and Fermín that takes place in a cinema, the voices of the people who are sitting behind them can be heard. For a brief second, I thought the people behind me were talking until I realised that I was sitting in the back row! That’s how rich the sound design is. The film’s climax, which takes place at the beach, is devastatingly powerful thanks to the sound of the surf. When I watched the film a second time at home, I thought my headphones would be able to capture this spatiality but they didn’t. Maybe I need better headphones but if your home sound system isn’t up to snuff, you’re going to miss out on a huge part of the experience.

ROMA is like nothing we’ve ever seen before. To the best of my knowledge, only three films have ever been nominated for both the Best Picture and Best Foreign Language Film Oscars — Z (1969), LIFE IS BEAUTIFUL (1998) and CROUCHING TIGER, HIDDEN DRAGON (2000) but none of these was able to take home both awards. ROMA might just be the first. It will probably also pick up Oscar nominations for direction, cinematography and sound.

ROMA is in my list of favourite films of 2018. Definitely go see it in the cinema if you can.

Watch the review recorded on Facebook Live on Friday, January 11th at 8:30 am HK time!

Sign up to receive my movie reviews in your inbox automatically.
Share this review on your Facebook page.
Leave me a message telling me what you thought of my review or the film.
Bookmark the site and visit often.
Like my Howard For Film Facebook page.
Don’t use Facebook? Now you can watch my videos on my YouTube page. (New!)
Check out my Howard For Film magazine on Flipboard.
Tell your friends about the site.