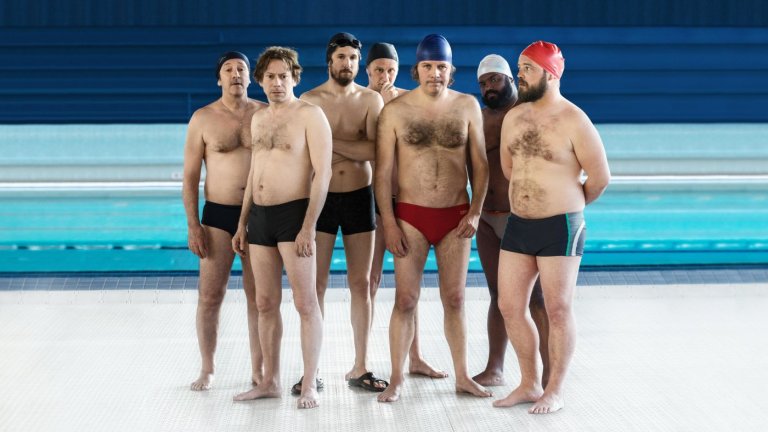 Gilles Lellouche is known more for his acting than his directing (he’s starring in JUSQU’ICI TOUT VA BIEN (its English language working title is “New Biz in the Hood! instead of the direct translation of “So Far, So Good”), which will be released in France at the end of February), but in SINK OR SWIM he’s behind the camera with the underdog story of a group of middle aged losers who decide to form a men’s synchronised swimming team and compete on the international stage.

Bertrand (Mathieu Amalric, AT ETERNITY’S GATE; QUANTUM OF SOLACE) is in a funk. Clinically depressed and on medication for the past two years, he spends his days at home waiting for each day to end so that the cycle can start again. Fortunately, his kids are used to their dad being this way and don’t seem too affected by it but his wife, Claire, must constantly defend her husband’s honour to her sister and brother-in-law who run a successful furniture store. One day, Bertrand decides to go for a swim at the local pool and there he spots a bunch of men about his age splashing about in their attempt at synchronised swimming. Their young coach, Delphine (Virginie Efira, IN BED WITH VICTORIA), is supportive but she knows they’ll never be any good. Once a synchronised swimmer herself, her glory days have also passed as she’s as broken as they are. Bertrand asks Delphine if he can join the group and, after a tiny taste of fame, the men decide to enter a world championship event that will take place in Norway. While the road to get there is gruelling with plenty of potholes along the way particularly thanks to their new, “take-no-prisoners” coach Amanda (Leïla Bekhti), and friends and family who think they’re nuts, the men are determined to succeed and reclaim their lost pride.

If this plot sounds familiar (aside from sounding like an aquatic take on THE FULL MONTY, which it is), it’s because you may have heard about or even seen a British version of this story, called SWIMMING WITH MEN, which came to Hong Kong last September. Both films are based on the true story of a Swedish all-male synchronised swim team whose rise to fame was captured in the documentary, MEN WHO SWIM, from 2010. SINK OR SWIM takes quite a few liberties with the true story, moving the locale to France, giving Bertrand depression and more, but the essence is still there as both groups of men were “fish out of water” to some extent.

As in many French movies today, some of the characters are unrealistically over the top as the writers attempt to go for the big laughs. Unfortunately, much of the humour fails to hit the bull’s eye but you’ll still let out a chuckle or two from time to time as you watch these pudgy men try to be graceful and athletic. To its detriment, the writers also employ some homophobic tropes, which may have been commonplace twenty years ago but are just not funny today. (Some would argue that they were never funny.) Their effort, though, is earnest and they show that the men’s success is due to their own hard work and not anyone else’s failure.

You’re not going to come away from SINK OR SWIM with any great revelations about aging, and you probably won’t want to take up synchronised swimming yourself after you watch this film, but it’s harmlessly entertaining for two hours. It also features a wonderful ’80s soundtrack that, not surprisingly, includes Olivia Newton-John’s Let’s Get Physical.

Watch the review recorded on Facebook Live on Friday, January 25th at 8:30 am HK time!