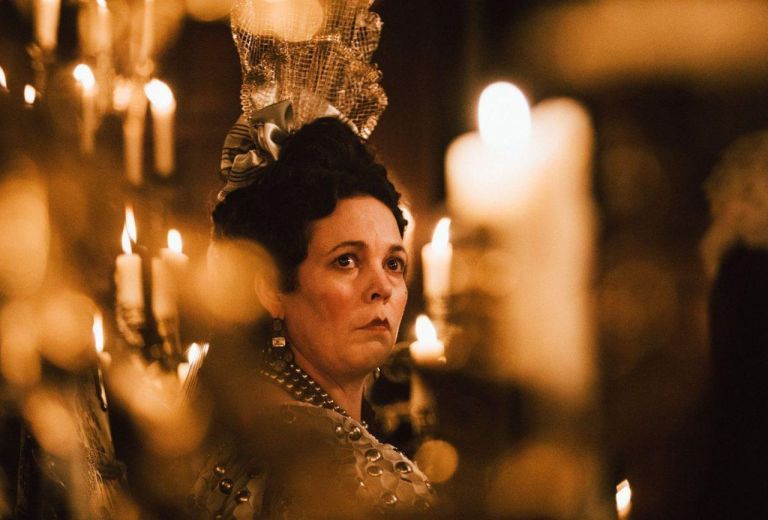 Who knew that the court of Britain’s Queen Anne was so full of intrigue? Fortunately, screenwriters Deborah Davis and Tony McNamara, along with director Yorgos Lanthimos (THE LOBSTER), did and we are blessed for it. Their unconventional period piece, THE FAVOURITE, is a wickedly funny delight.

Set in early 18th century, the widowed and childless Queen Anne (Olivia Colman, MURDER ON THE ORIENT EXPRESS; THE LOBSTER; TV’s PEEP SHOW and soon to be seen in TV’s THE CROWN as QEII) rules over an unsteady England with her childhood best friend and sometime lover, Lady Sarah Churchill, the Duchess of Marlborough (Rachel Weisz, DENIAL; THE LOBSTER) by her side advising her every step along the way. Sarah is more than just a trusted confidante to the temperamental and slightly dimwitted queen though, often making the important decisions for the country that is at war with its neighbour. After Sarah learns of her cousin Abigail Hill (Emma Stone, BATTLE OF THE SEXES; LA LA LAND; IRRATIONAL MAN), who has fallen on hard times thanks to her father’s gambling habit, she invites the young woman to the palace to work as a scullery maid. Abigail, however, is determined to regain her lost social standing any way she can and she quickly ingratiates herself to Anne while playing coy with Sarah’s foes, the government’s Leader of the Opposition, Harley (Nicolas Hoult, soon to be seen in DARK PHOENIX), and his crony, Masham (Joe Alwyn, BILLY LYNN’S LONG HALF-TIME WALK). Anne, for her part, loves the added attention she is receiving and soon she is playing Sarah and Abigail off against each other as they vie to be her favourite. That is, until only one of them is left standing.

THE FAVOURITE is a royal romp full of witty dialogue, playful camerawork using wide- and ultra-wide angle lenses and low-angle shots, fabulous costumes and makeup, and perhaps the best dance sequence on film since John Travolta and Uma Thurman rocked the floor in PULP FICTION. The three actresses also brought their A-game to the set so it’s no wonder the film has been nominated for ten Oscars. It’s Colman, though, who is the film’s brightest light as the pouty and gouty monarch. At first glance, Anne comes across as being no match for the two scheming and ruthless cousins but then she has her moments when she reminds everyone including herself just who the boss is and it’s deliciously sweet when she does.

The film has already won Grand Jury Prize at the Venice Film Festival and the BAFTA Award for Outstanding British Film. The odds makers though, have placed it third behind ROMA and GREEN BOOK to take home the Oscar for Best Picture on Sunday. I think they might be right, though I wouldn’t be sad if THE FAVOURITE scored an upset victory as it was my favourite film from 2018.

THE FAVOURITE is definitely a film you should see. It’s not historically accurate but who cares? It’s so much fun. Get thee to a movie house with haste! I guess that’s 16th or 17th century English… sort of.

11 thoughts on “Movie Review: The Favourite”