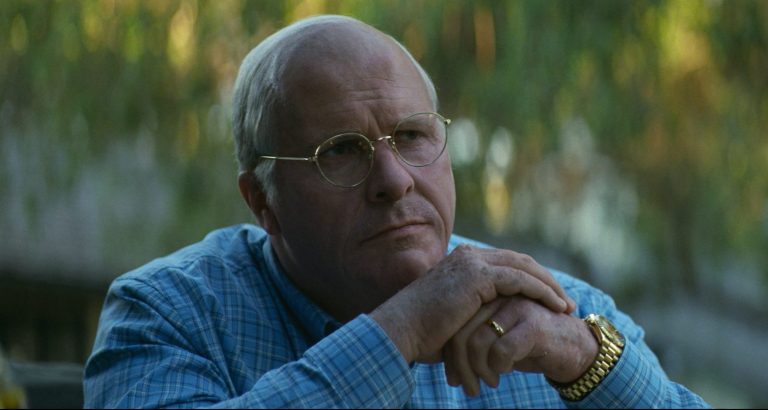 Before Donald Trump, perhaps the most widely reviled politician in America was former Vice President Dick Cheney. The intensely private man has been largely seen as the true power behind the Bush 43 presidency; the man who shaped America’s foreign policy following the events of 9/11 and who threw his country into a protracted war in Iraq that massively enriched himself and his friends at government contractor Halliburton. If there would be justice in the US for the rich and powerful, Cheney would be sitting in a federal prison somewhere. Instead, he’s still quietly working behind the scenes helping craft the Republican Party’s conservative agenda going forward.

Writer-director Adam McKay’s (THE BIG SHORT) latest film, VICE, takes a sometimes funny and sometimes frightening look at the man who flunked out of Yale and was once a telephone company lineman but who then entered the political arena and quickly rose through the ranks to become America’s youngest White House chief of staff, then its secretary of defense, and finally its vice president. Though neither as witty nor as biting as THE BIG SHORT, the film does offer an albeit slight and perhaps somewhat inaccurate glimpse into this opaque figure. Even McKay acknowledges at the film’s outset that because so little is known about Cheney, they did their [expletive] best to tell the real story.

The VICE story is narrated by Kurt (Jesse Plemons, GAME NIGHT; TV’s BREAKING BAD), a man whose connection to Cheney is only revealed toward the end of the film. Let’s just say they were very close. Not surprisingly for a biopic, the cast features a roster of actors who either share a passing resemblance to or were made up to look like the people who held high positions in America’s chain of command at the time, including Amy Adams (ARRIVAL; AMERICAN HUSTLE; HER) as Lynn Cheney, McKay alumnus Steve Carell (BEAUTIFUL BOY; BATTLE OF THE SEXES; CAFÉ SOCIETY; THE BIG SHORT) as Donald Rumsfeld, Sam Rockwell (THREE BILLBOARDS OUTSIDE EBBING, MISSOURI) as George W. Bush, Lisa Gay Hamilton (BEAUTIFUL BOY; TV’s THE PRACTICE) as Condoleezza Rice, Tyler Perry (the Madea series) as Colin Powell, Eddie Marsan (ATOMIC BLONDE; THEIR FINEST) as Paul Wolfowitz, and Bill Camp (RED SPARROW) as Gerald Ford. Leading the pack is another McKay alumnus, Christian Bale (THE BIG SHORT; EXODUS: GODS AND KINGS; AMERICAN HUSTLE), who is so well made up that the actor is almost unrecognisable. As Bale does with every role, he throws himself right into the deep end. Here, he not only gained a reported 45 pounds, he also has Cheney’s cadence down pat as well as the man’s drooping left eyelid and tendency to speak out of the left side of his mouth. Bale has received a number of accolades for his performance including a Golden Globe, and many are predicting he’ll take home the Oscar on Sunday night for Best Actor. Whether he does or not, the movie is the odds on favourite to win for Best Makeup and rightly so.

As good as the performances and makeup are though, the movie seems more like a two-hour hatefest. I dislike the man as much as the next guy but after watching VICE for a half hour, I was bored. Because the story is full of speculation and hearsay, we’re not given any insight into what motivates the man. Certainly, his wife Lynn played a huge part in his transformation but we don’t get to see the genesis of his political views. Are we supposed to believe that one morning he just woke up and decided to join the government’s internship program? How did he get the job anyway? Yes, Donald Rumsfeld had a lot of input into shaping Cheney’s world view but there’s more to it than just that. Unfortunately, we don’t get to see it and, given the Cheney family’s sense of privacy, we may never get to understand it. As a result, the film just character-bashes and it gets tedious to watch.

That being said, it’s not a bad film. It’s just not a great film and it’s nowhere near as enjoyable or educational as THE BIG SHORT. Check it out if only for Bale’s performance as this unapologetic Dick.